Perceptions of Iraq War Are Starting to Shift 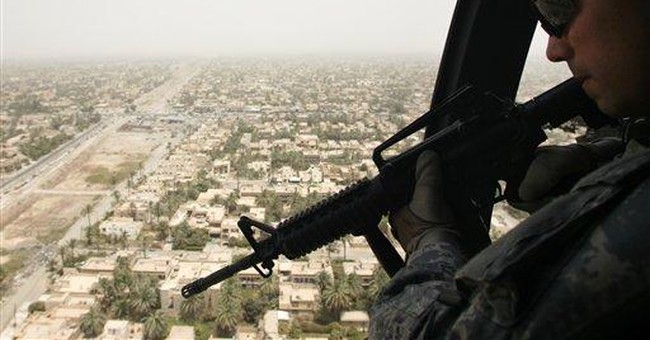 It's not often that an opinion article shakes up Washington and changes the way a major issue is viewed. But that happened last week, when The New York Times printed an opinion article by Brookings Institution analysts Michael O'Hanlon and Ken Pollack on the progress of the surge strategy in Iraq.

Yes, progress. O'Hanlon and Pollack supported the invasion of Iraq in 2003 -- Pollack even wrote a book urging the overthrow of Saddam Hussein -- but they have sharply criticized military operations there in the ensuing years.

"As two analysts who have harshly criticized the Bush administration's miserable handling of Iraq," they wrote, "we were surprised by the gains we saw and the potential to produce not necessarily 'victory,' but a sustainable stability that both we and the Iraqis could live with."

Their bottom line: "There is enough good happening on the battlefields of Iraq today that Congress should plan on sustaining the effort at least into 2008."

That's not what almost all their fellow Democrats in Congress want to hear. Freshman Rep. Nancy Boyda of Kansas, who unseated Republican Jim Ryun last fall, bolted from a hearing room when retired Gen. Jack Keane described positive developments in Iraq. When she came back, she explained: "But let me first just say that the description of Iraq as in some way or another that it's a place that I might take the family for a vacation -- things are going so well -- those kinds of comments will in fact show up in the media and further divide this country, instead of saying, here's the reality of the problem. And people, we have to come together and deal with the reality of this issue."

But reality can change -- and in war it often does. For George W. Bush and his leading advisers, the reality of Iraq in June 2003 was that we had won a major military victory and that any postwar messiness was not a big problem. We'd put a proconsul in for a year, set up elections and install an Iraqi government, train Iraqi soldiers and police, and restrict our troops to a light footprint. But that reality changed, into full-fledged sectarian warfare, after al-Qaida bombed the Shiite mosque in Samarra in February 2006.

Bush and his military commanders acted as if that reality hadn't changed, until the voters weighed in last November. Then, Bush made changes, installing new commanders and ordering a surge -- an increase in troops, and a more forward strategy of confronting and cleaning out al-Qaida terrorists. And the reality apparently has once again changed.

It can be argued that the surge will prove insufficient to produce the "sustainable stability" that O'Hanlon and Pollack see as a possible result. Serious military experts have argued that we still don't have enough troops or that we won't be able to keep enough troops in place long enough -- current force rotations indicate a net drawdown of troops next spring. And certainly there is room to make the argument that Bush should have acted sooner, as the results of the Samarra bombing became apparent months before the voters' wakeup call.

But it is also reasonably clear that Boyda's "reality of this issue" -- that our effort in Iraq has definitively and finally failed so clearly that there should be no further discussion -- may no longer be operative. That, instead of accepting defeat and inviting chaos, we may be able to achieve a significant measure of success.

Wars don't stand still. In June 1942, the House of Commons debated a resolution of no confidence in Winston Churchill's government. Four months later came the war-changing victory at El Alamein.

Gen. David Petraeus, the author of the Army's new counterinsurgency manual and the commander in Iraq, is scheduled to report on the surge in mid-September. The prospect of an even partially positive report has sent chills up the spines of Democratic leaders in Congress. That, says House Majority Whip Jim Clyburn, would be "a real big problem for us."

The Democratic base has been furious that Democrats in Congress haven't pulled the plug on the war already, and Democratic strategists have been anticipating big electoral gains from military defeat. But if the course of the war can change, so can public opinion. A couple of recent polls showed increased support for the decision to go to war and belief that the surge is working. If opinion continues to shift that way, if others come to see things as O'Hanlon and Pollack have, Democrats could find themselves trapped between a base that wants retreat and defeat, and a majority that wants victory.