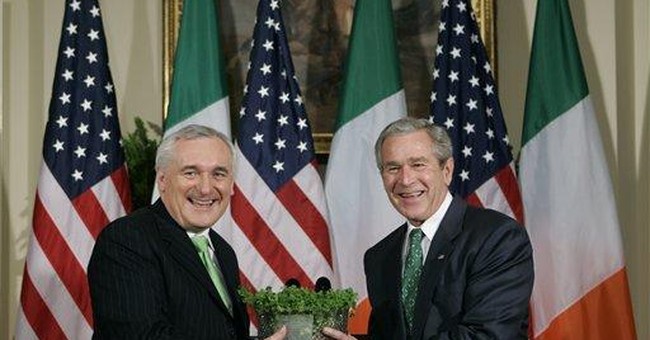 "They always blame America first." That was Jeane Kirkpatrick, describing the "San Francisco Democrats" in 1984. But it could be said about a lot of Americans, especially highly educated Americans, today.

In their assessment of what is going on in the world, they seem to start off with a default assumption that we are in the wrong. The "we" can take different forms: the United States government, the vast mass of middle-class Americans, white people, affluent people, churchgoing people or the advanced English-speaking countries. Such people are seen as privileged and selfish, greedy and bigoted, rash and violent. If something bad happens, the default assumption is that it's their fault. They always blame America -- or the parts of America they don't like -- first.

Where does this default assumption come from? And why is it so prevalent among our affluent educated class (which, after all, would seem to overlap considerably with the people being complained about?). It comes, I think, from our schools and, especially, from our colleges and universities. The first are staffed by liberals long accustomed to see America as full of problems needing solving; the latter have been packed full of the people cultural critic Roger Kimball calls "tenured radicals," people who see this country and its people as the source of all evil in the world.

On campuses, students are bombarded with denunciations of dead white males and urged to engage in the deconstruction of all past learning and scholarship.

Not all of this takes, of course. Most students have enough good sense to see that the campus radicals' description of the world is wildly at odds with reality. But this battering away at ideas of truth and goodness does have some effect. Very many of our university graduates emerge with the default assumption thoroughly wired into their mental software. And, it seems, they carry it with them for most of their adult lives.

Roberts points out almost all the advances of freedom in the 20th century have been made by the English-speaking peoples -- Americans especially, but British, as well, and also (here his account will be unfamiliar to most American readers) Canadians, Australians and New Zealanders. And he recalls what held and holds them together by quoting a speech Winston Churchill gave in 1943 at Harvard: "Law, language, literature -- these are considerable factors. Common conceptions of what is right and decent, a marked regard for fair play, especially to the weak and poor, a stern sentiment of impartial justice and above all a love of personal freedom ... these are the common conceptions on both sides of the ocean among the English-speaking peoples."

Churchill recorded these things in his four-volume history of the English-speaking peoples up to 1900: the development of the common law, guarantees of freedom, representative government, independent courts.

More recently, Adam Hochschild, in his excellent "Breaking the Chains," tells the story of the extraordinary English men and women, motivated by deep religious belief, who successfully persuaded Britain to abolish the slave trade and then slavery itself. Their example was followed in time, and after a bloody struggle, by likeminded Americans. The default assumption portrays American slavery as uniquely evil (which it wasn't) and ignores the fact the first campaign to abolish slavery was worded in English.

The default assumption gets this almost precisely upside down. Yes, there are faults in our past. But Americans and the English-speaking peoples have been far more often the lifters of oppression than the oppressors.

"There is something profoundly wrong when opposition to the war in Iraq seems to inspire greater passion than opposition to Islamist extremism," Sen. Joseph Lieberman said in a speech last week. What is profoundly wrong is that too many of us are operating off the default assumption and have lost sight of who our real enemies are.