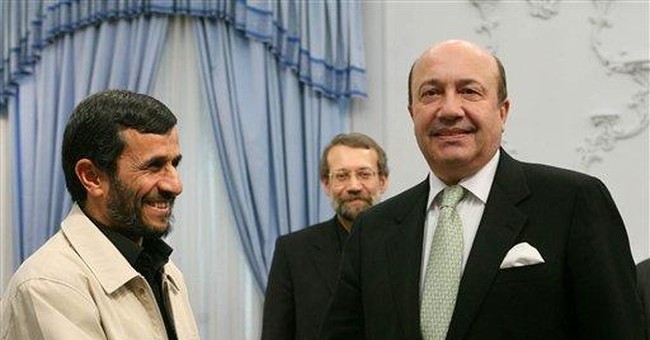 It's often hard to identify a turning point in a military conflict. The news of mayhem comes in every day, and it's hard to figure out which changes the course of things.

Metrics available to the public are useless -- those available to commanders are, I suspect, far from completely helpful. Military historians can look back and, knowing more and with more certainty than anyone at the time, center their narratives on actions that really made a difference. Those of us following events through (often biased) news media and (often insightful but never with a full picture) military bloggers can't do this. Only on looking back can we begin to guess where the road turned.

In looking back over the last year, I see two turning points in the Middle East -- note, not just Iraq, but the Middle East. The first was the bombing of the Golden Mosque in Samarra in February 2006. This was intended to, and evidently did, spark an upsurge of sectarian violence -- Shias killing Sunnis and vice versa.

In retrospect, and as George W. Bush indicated in his speeches of Jan. 10 and Jan. 23, it was a significant turning point. If Bush's surge of troops into Baghdad and Anbar is the right response to this increased violence now, it would have been the right move six months ago. But readers of military history won't be surprised that his timing was off. So was that, at times, of indisputably great commanders like Winston Churchill and Franklin Roosevelt.

The other turning point, as I look back, was Hezbollah's invasion of Israel last July. The military effectiveness was hard to gauge and Israelis are still arguing about whether they suffered a defeat, scored a victory or managed a stalemate. But the important thing here, at least in the opinion of key administration policymakers, was not the effect on the Israelis or even the Lebanese, but the effect on other Arab states.

The Sunni Arab states viewed the Hezbollah attack -- undertaken without even the notification of the Lebanese government, yet putting Lebanon at grave risk -- as an Iranian offensive aimed at establishing something like hegemony over the greater Middle East. Shia, Persian hegemony -- not something welcomed by the Gulf states, Saudi Arabia, Jordan and Egypt. For all their rhetorical opposition to Israel over the years, they found they had more in common with Jewish Israel than Muslim Iran. So they began to urge the United States to do more to curb the power of Iran.

As with the bombing of the Golden Mosque, so with the Hezbollah attack on Israel, the United States took time to respond -- more time, I suspect, than future historians will decide was appropriate. But after the policy review that followed the Republican defeat in the November elections, we have responded. The rules of engagement have been changed in Iraq: U.S. forces captured and held Iranian "consular" officials in Erbil, and there is reason to believe we're stepping up interdiction of Iranian weapon supplies to various hostile forces in Iraq.

Bush appointed an admiral to be the head of CentCom, the regional command in the area, and ordered a second aircraft carrier group sent to the Persian Gulf. This is a hugely significant move, signaling that if necessary we can bring overwhelming military force to bear against Iran, as we did in 1986-88. We can stop the Iranians from blocking the Straits of Hormuz and we can, if we choose, conduct the air strikes against Iranian oil refineries and military facilities recommended by historian Arthur Herman.

Senate Majority Leader Harry Reid responded by demanding that the administration not take action against Iran, and The New York Times condemned Bush for "bullying" poor, sweet little Iran. These responses are typical of the fundamentally unserious criticism being lobbed against Bush these days. The correct criticism is not that we're doing too much to hurt the mullahs, but that we're doing too little.

The critics ignore the fact that Iran has been making war against us for 27 years, since they violated the most fundamental law of diplomacy by taking our diplomats hostage. The critics seem more interested in seeing Bush lose than in seeing the United States win. Fortunately Bush still wants to prevail.