Empty Words From the U.S. Senate 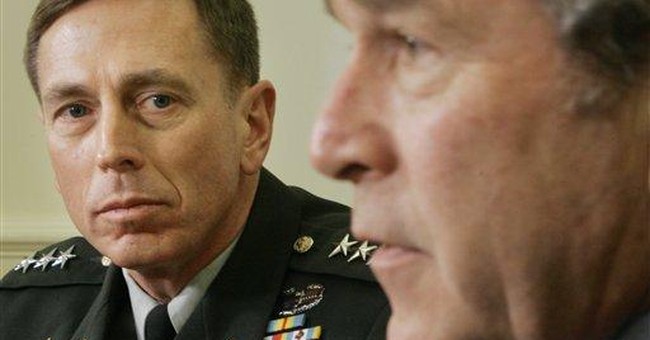 Sometimes, it's useful to take politicians at their word. George W. Bush has announced that he's sending an additional 21,000 troops to Iraq, to provide security in Baghdad and Anbar province. Gen. David Petraeus in testimony to the Senate Armed Services Committee said that it's impossible to achieve that goal without additional troops. He also said, in response to a question from Sen. Joseph Lieberman, that a congressional resolution disapproving of the additional troops would not have a positive effect on military morale.

We don't know whether this "surge" of troops to Iraq will achieve its goal, but we do know that Petraeus is held in high regard. Armed Services voted unanimously to confirm him.

With that in mind, let's look at the decisive words in the resolution approved with a 12-to-9 majority by the Senate Foreign Relations Committee and which seems sure to be approved by a majority of the Senate. "The primary objective of the United States strategy in Iraq," reads the resolution, "should be to have the Iraqi political leaders make the political compromises necessary to end the violence in Iraq." Compromises with whom? The al-Qaida forces? What compromises would satisfy them? With the Baathist Sunnis? Ditto. With Sunni and Shia militias? Maybe some would be satisfied by "political compromises." But some probably won't.

Sometimes, the only way to stop the bad guys is to capture or kill them or threaten credibly to do so. It's not a bad idea to pressure the Iraqi government to act against the sectarian killers -- there's evidence it's already doing so. But if they don't have enough military strength to stop the violence -- and no one says they do -- those efforts could be too little.

Here the resolution fudges. "The United States should transfer, under an appropriately expedited timeline, responsibility for internal security and halting sectarian violence in Iraq to the government of Iraq and Iraqi security forces." It also says it is "not in the national interest of the United States to deepen its military involvement in Iraq, particularly by increasing the United States military force presence in Iraq."

So we shouldn't fight any harder, and we shouldn't send in any more troops to accomplish something -- the restoration of order in Baghdad and Anbar -- that Petraeus says can't be accomplished without more troops and different tactics.

This seems to envision that we keep doing just what we've been doing until the Iraqi forces grow stronger -- the same course of action that these senators say has failed. Then we should hand over responsibility to the Iraqi government "under an appropriately expedited timeline" -- classic bureaucratic language, which can mean in practice anything you want it to. And then everything will be fine.

Or at least if others cooperate. The resolution states that "greater concerted regional and international support would assist the Iraqis in achieving a political solution and national reconciliation" and "the United States should engage nations in the Middle East to develop a regional, internationally sponsored peace and reconciliation process for Iraq."

Yes, it would and should. But it would and should also help the average porcine altitude if pigs could fly. Like the Iraq Study Group, the senators supporting the resolution are expressing pious hopes that very unlikely things will happen, that the governments of Iran and Syria will nurture tranquility and democracy in Iraq, that the French or the United Nations will come up with a recipe for Iraqi reconciliation that has somehow eluded us unsophisticated Americans. The pigs are up to 30,000 feet now.

"The main elements of the mission of United States forces in Iraq," reads the resolution, "should transition to helping ensure the territorial integrity of Iraq, conduct counterterrorism activities, reduce regional interference in the internal affairs of Iraq and accelerate training of Iraqi troops." Another bureaucratic fudge word -- "transition" -- which means that the resolution leaves the timeline for these things entirely open.

So the upshot of the resolution is that we should keep doing for some undetermined period of time pretty much what we have been doing, though it hasn't been working, and we should not do the different things that Petraeus thinks have a chance -- he's not guaranteeing success -- of working.

What the resolution tells us is that most members of Congress, echoing what they think is the view of most voters, yearn to return to the holiday from history that we thought we were enjoying between the fall of the Berlin Wall and Sept. 11, 2001. And that they have no idea at all of how to get there.