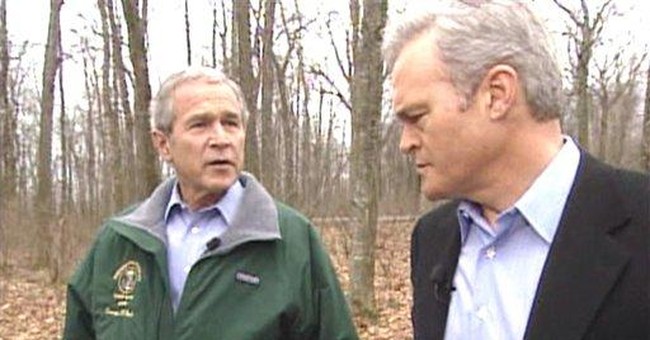 The spotlight this past week has been on George W. Bush. Against the tide of public opinion, and to the rage of congressional Democrats, he has ordered an increase of troops in Iraq in order to pacify Baghdad and Anbar province.

No one knows for sure whether this will work -- and the metric by which it will be judged. Bush was careful in his Wednesday night speech to warn Americans that it may mean more casualties for some considerable period of time. Both houses of Congress seem likely to pass resolutions disapproving of Bush's decision, with significant numbers of Republicans voting against their party's leader. It's going to be a difficult time.

For six years now, American politics has revolved around George W. Bush, just as it revolved for eight years before that around Bill Clinton. These two presidents -- both born in 1946, the opening year of the baby boom, both graduates of the high school class of 1964, the peak SAT-scoring class of all time -- both happen to have personal characteristics that people on the other side of the cultural divide absolutely loathe. We are so used to having these divisive central figures that it's difficult to imagine what American politics will be like without them.

Yet we are coming to that time soon. 2008 will be the first presidential election year since 1928 in which neither the incumbent president or vice president will be a candidate at any point in the process.

In 1928, both parties nominated candidates who represented a change in course. Herbert Hoover was far less of a free marketer than Calvin Coolidge (who referred to him privately as "Wonder Boy"). Al Smith, the Catholic governor of New York, was culturally far distant from the Southern and border-state Protestant Democrats who made up most of the party's officeholders.

The general election saw sharp shifts in voting patterns. Hoover ran ahead of Coolidge in the progressive Northwest from the Great Lakes to the Pacific coast. Smith ran ahead of previous Democrats in Catholic and immigrant neighborhoods of the big cities.

Thirteen months from now, we are likely to know who will be the nominees of our two major parties. The current leaders in the polls are in opposition to or in tension with their parties' bases in important respects. Rudolph Giuliani is way out of line with cultural conservatives on issues like abortion, gay rights and gun control. John McCain has been at odds with Republican partisans on issues like campaign reform, detainees' rights and tax cuts. Hillary Rodham Clinton has been out of line with the antiwar left on Iraq and other national security issues. Barack Obama -- if he is to be included on the list -- speaks in a tone far less angry and partisan than the enraged Democratic left.

There is no guarantee that any of these candidates will be nominated. Many Washington insiders think that Mitt Romney, now mostly unknown, and John Edwards, not yet known in depth, will emerge as strong contenders. Both fit more closely the profile of their parties' bases -- but both have records on issues that are inconveniently out of line with them. And dark horses could turn out to be strong horses. Who was giving serious consideration to Howard Dean at this point in the 2003-04 cycle?

Still, the likelihood is that the Republicans will nominate a candidate significantly different from George W. Bush and that the Democrats will nominate a candidate whose stands and style will differ significantly from that of Al Gore and John Kerry. Current polls suggest there will be more moveable voters than in 2000 or 2004. In polls in the 2003-04 cycle, neither Bush nor various Democrats scored so high as to suggest that either party's candidate would win more than the 51 percent Bush ultimately got. Movement was minimal. But in polls in this cycle we have seen well-known candidates of both parties run far ahead of little-known candidates of other parties -- far enough to suggest that they could get over that 51 percent level in general elections. Voters who wouldn't consider a Republican or Democrat in 2004 seem willing to at least consider one in 2008. The Karl Rove model of turning out your base may prove obsolete. Some analysts assume that Republicans will be weighed down by low Bush job ratings. But that may not be the case. I think we're entering a period of open-field politics, in which both parties will be defined less by their past leaders than by their new nominees. To read more political analysis by Michael Barone, visit www.usnews.com/baroneblog. To find out more about Michael Barone, and read features by other Creators Syndicate writers and cartoonists, visit the Creators Syndicate Web page at www.creators.com. COPYRIGHT 2007 CREATORS SYNDICATE INC. ?? ?? ?? ??