Storm approaching on the Hill 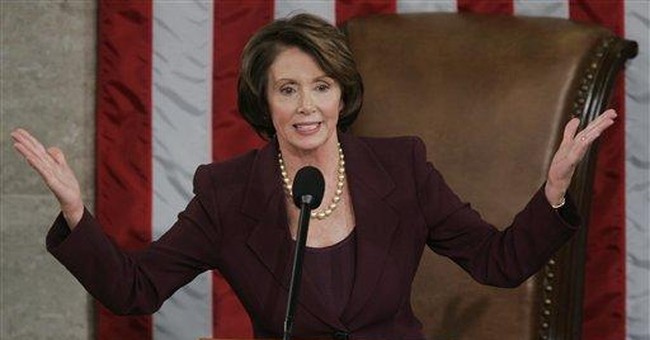 Cynics surely found the words of good will exchanged by the new speaker of the House, Nancy Pelosi, and the new House minority leader, John Boehner, at the opening session of the new Congress to be hypocritical and insincere. The two leaders are grizzled veteran pols, after all, who have not been known to be on close, much less candid, terms with each other over the years. But I know them both, and I believe they were speaking genuinely from the heart.

The passage of power from one political party to another is an awesome thing for anyone who knows much history, indeed for anyone who clicks his remote control onto cable news. It is not the norm in human history. And the swearing in of a 110th Congress -- 110th! -- is part of a living chain that links us to George Washington and to James Madison, who was sworn in as a member of the House in the First Congress, 218 years ago.

Which isn't to say that there isn't going to be some bitter conflict between the new Democratic Congress and George W. Bush in months ahead. That's not out of line with tradition, either: Madison was opposing Washington's major initiatives long before the First Congress adjourned. In that case, the conflict occurred over Alexander Hamilton's economic policies. In this case, the conflict seems likely to occur over what we should do next in Iraq.

Pelosi and Senate Majority Leader Harry Reid have made it clear that they take the Democratic victory last November as a mandate for withdrawal from Iraq. That's a point you could argue with -- you could make a case from the polls that what voters want most of all is victory and success. But Pelosi and Reid and almost all of their Democratic colleagues are sincere in their view, which is at the least plausible.

George W. Bush, from all accounts, seems to take a different view. He evidently sees the November result as a verdict of dissatisfaction with unsuccess and lack of victory, and so is promising a "new way forward." He has been prompted by his party's "thumpin'" to change the way he manages.

Since the success of the major military operations in May 2003, he has delegated power to appointees he trusts and has mostly ratified their plans. Far from micromanaging the military, he and former Defense Secretary Donald Rumsfeld seem to have approved pretty much everything that Centcom head Gen. John Abizaid and the rotating military commanders in Iraq have proposed. They seem not to have taken the advice of military historian Eliot Cohen in his book "Supreme Command" that wartime commanders in chief should constantly question, probe, prod and, yes, even overrule their generals, as Lincoln, Clemenceau, Churchill and Ben Gurion did.

Now it looks like Bush is doing something like that. Rumsfeld's resignation was announced the day after the election; Director of National Intelligence John Negroponte has been moved over to State; Abizaid's retirement has been announced; and Gen. George Casey, the on-the-ground commander in Iraq, is being moved out early. Bush is reported to be planning a "surge" of additional troops into Iraq to establish order in Baghdad and Anbar province. Clearly, the president is changing tactics and maybe even strategy.

Many Democrats are calling this "escalation" and are swearing they'll oppose it. For those who see Iraq through the prism of Vietnam, a surge is something like Richard Nixon's invasion of Cambodia, an intensification of a war that never seems likely to go away.

I have been of the view that the Democratic Congress would not use its legislative powers to bar an increase in troop levels, for fear they would be seen as not supporting the troops already there (and for fear they couldn't get majorities on the floor), and I still think that's unlikely. There's a danger in being seen as promoting an American defeat. But the left wing of the Democratic Party will be calling loudly for defunding the war, and as we saw last week, in a jarring episode during the festivities, Cindy Sheehan can outshout the Democratic leadership.

I think we're going to see a very loud and bitter clash, one that will contrast vividly with the graceful words of Pelosi and Boehner on opening day. One side wants American victory and success, though it cannot promise that they are certain; the other wants only exit, without regard to the consequences. The 110th Congress will be no more devoid of controversy and angry partisanship than the First.