When did ‘Profit’ become a Dirty Word? 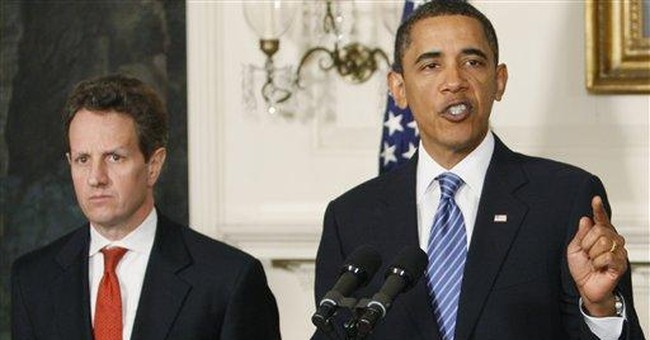 The freedom to work hard and become wealthy has long been part of America’s unique character. No other nation offers the ability for any man, regardless of his station in life, to rise to the level held only by aristocracy or royalty throughout much of the rest of the world. Capitalism and the free market are a fundamental part of the American experience.

This is the true definition of equality: all men start on equal footing, born into freedom and use that freedom to make their mark on the world. Turning a profit, earning money, amassing wealth are all evidence that an American is taking advantage of his or her birthright. But as freedom has diminished in the shadow of a growing nanny state, the old hallmarks of capitalism and economic prosperity have become a threat to government monopoly.

Backing up his assertion to 60 Minutes last month that “I did not run for office to be helping out a bunch of fat cat bankers on Wall Street,” President Obama announced this week that he wants a “financial crisis responsibility fee” on all banks in order to recoup the government’s TARP bailout funds. But the tax—forget the euphemistic “fee” label—will be levied on all banks with assets over $50 billion—even those that never received any taxpayer dollars or have paid back the government for their bailout.

The President pounced on Wall Street’s million-dollar bonuses to justify his new tax, hoping to incite the class warfare anger that has propelled the Democrat Party to more than its share of political victories. But as Yale Law School professor Jonathan Macey pointed out in the Wall Street Journal this week, such transparent political attacks don’t withstand the fact that bonuses are considered a commission earned based on successful performance, not a fat cat payoff. Capitalism won’t reward failure or the inability to turn a profit.

Politicians have long used the tactic of class warfare in appealing to certain voting segments. Democrats have staked their entire existence on pitting blue collar against white collar. Presidential candidate John Edwards was the most recent and blatant demagogue to capitalize on this tactic with his famous “two Americas” stump speech.

Fundamentally, class warfare is merely the means to achieve redistribution of wealth at the government’s direction. Such government redistribution is certainly part of President Obama’s agenda, as he explained to “Joe the Plumber” Wurzelbacher on the campaign trail in 2008: “I think when you spread the wealth around, it’s good for everybody.”

The very concept of redistribution of wealth is based upon the premise that it is unfair for certain individuals to make more money than others. To rectify this injustice, the profitable should give part of their profit to the less profitable. Under this form of government, the profitable are punished for their success.

Since government should “Never want a serious crisis to go to waste,” in the words of White House Chief of Staff Rahm Emanuel, government utilized the financial crisis to usurp greater control of America’s economy and implement their redistribution machinations. Who could have imagined something as un-American as a government “pay czar”—something completely inimical to the principles of a free market system.

Many Wall Street companies were quick to repay their TARP money, which seemed to perturb some in Washington. Is it too cynical to say that it almost appeared as though the government wanted corporations beholden to the government—subject to political oversight due to their indebtedness?

It seems unimaginable considering America’s history of hard work and exponential growth, but today, making a profit is considered elitist. The evil of profitably has even become the battle cry in pushing for government-run healthcare. How dare a greedy insurance company make money off of others’ pain and suffering! But what makes health insurance companies or hospitals any different than grocery stores or clothing companies? They all meet basic human needs, but in a profitable manner—benefiting the patient or customer, the employee and the owner.

Profit may be considered a dirty word in Washington, D.C., but it’s a word that deserves continued respect and elevation in the American lexicon.