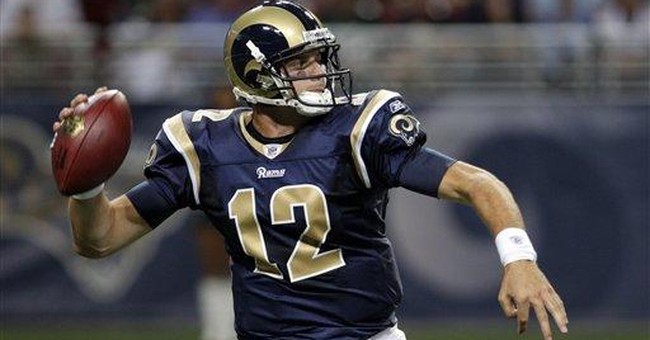 The ugly political practice of race-baiting has now infected the NFL. Last week news broke that conservative radio talk show king Rush Limbaugh was part of a group placing a bid to purchase the St. Louis Rams NFL franchise and in the ensuing days a race firestorm erupted.

Political opponents of Limbaugh and his conservative views immediately launched a malicious campaign to torpedo his chances at owning the team. With self-righteous claims of preventing “hatred” and “discrimination” in their midst, NFL union leaders, incited by notorious race extortionists Al Sharpton and Jesse Jackson, say their opposition is rooted in “racist” comments made by the talk show host six years ago.

In 2003, Limbaugh resigned as a co-host of ESPN’s Sunday NFL Countdown program after observing that the media’s desire to see a black quarterback do well inflated their opinion of Philadelphia Eagles quarterback Donavan McNabb’s actual performance and contribution to his team. ESPN obviously believed that with his knowledge and love for the game of football, Limbaugh would make an excellent commentator. But when he expressed his opinion about McNabb’s abilities and the media’s coverage of the NFL, Limbaugh was forced to resign.

There’s an important distinction that is missed in the vitriol surrounding the McNabb controversy: Limbaugh’s comments about Donavan McNabb weren’t racial—they were political. Commenting on Affirmative Action and its impact on sports was not racist, it was a political observation. In fact, in light of the NFL’s own policies, Limbaugh’s analysis seems entirely appropriate. It was the NFL that invited racial politics into its league.

The same year that Limbaugh made his McNabb comments, the NFL fined the Detroit Lions for failing to interview minority candidates for their head coaching position, violating the NFL’s diversity rules. The Lions insisted they approached minority candidates, but when it appeared veteran coach Steve Mariucci was being considered, the other candidates dropped out. However, then-NFL Commissioner Paul Tagliabue admonished the team, “While certain of the difficulties that you encountered in seeking to schedule interviews with minority candidates were beyond your control, you did not take sufficient steps to satisfy the commitment that you had made.”

It now appears racial politics drive many of the decisions made in America’s favorite sport.

NFL Players Association executive director DeMaurice Smith absurdly equated Limbaugh’s ownership of a team to slavery: “They [players] risk everything to play this game, they understand that risk and they live with that risk and its consequences for the rest of their life. We also know that there is an ugly part of history and we will not risk going backwards, giving up, giving in or lying down to it.” NFL fans—especially fire fighters, police and other local heroes—will find it hard to relate to sports players “risking everything” when their annual income for playing a game is more than most fans will ever see in their lifetime. And the perception that Rush Limbaugh will somehow behave as a slave owner is not just ridiculous but blatant race-baiting. As with any responsible business owner, Limbaugh will hire his employees based on their abilities rather than their race.

Following Smith’s plea for players to “express their views” on Limbaugh’s bid, some NFL players claim that they would refuse to play if Limbaugh is allowed to purchase a franchise. Forfeiting millions of dollars to make a political point is a bluff owners should call without fear.

After a few days of politically-motivated calls for Limbaugh’s bid to be rejected, NFL Commissioner Roger Goodell joined the irresponsible and unfounded attacks on Limbaugh: “I've said many times before we’re all held to a high standard here, and I think divisive comments are not what the NFL is all about. I would not want to see those comments coming from people who are in a responsible position in the NFL, absolutely not.”

Indianapolis Colts owner Jim Irsay flatly stated he would not vote to approve Limbaugh’s bid: “It's bigger than football. We have to watch the words that we say.... Sometimes privileges in life do get lost. I would not feel comfortable.” Is it hypocritical that Limbaugh would be disqualified for his conservative political opinions in a sports league that regularly reinstates and rewards players who have engaged in all kinds of illegal behavior? Somehow convicted criminals don’t lose their playing privileges and Irsay and his fellow owners seem comfortable with paying them millions of dollars.

With both the commissioner and team owners publicly denouncing him, Limbaugh’s bid is a long shot—especially since three-fourths of the other 31 team owners must approve any new ownership of the St. Louis Rams.

This unprecedented attack on a potential owner—for his political beliefs—is akin to referees imposing a new, game-changing rule in the middle of the game. Will other owners be willing to make bids for teams for fear their personal political comments or activities may haunt them? Bidding for ownership could become as publicly humiliating as running for public office.

Rush Limbaugh owning an NFL team would not tarnish the reputation of the league. Including amongst their owners a man who is a successful businessman and obviously ardent fan would benefit the NFL. The NFL is harming its own reputation by engaging in the character assassination of a qualified potential owner.

This needless controversy has cast a dark shadow over a sport that fans regard as a sanctuary from the political correctness imposed on much of society. A sport like football cannot thrive under political correctness. Players are chosen and rewarded based on their natural talent. There is no such thing as an even playing field when it comes to physical ability and innate talent. The goal of any NFL team is to win the Super Bowl and make money. At least, it used to be. Now it seems the NFL, like too many other American institutions, is more interested in a diversified appearance than rewarding true talent, regardless of race or political philosophy.