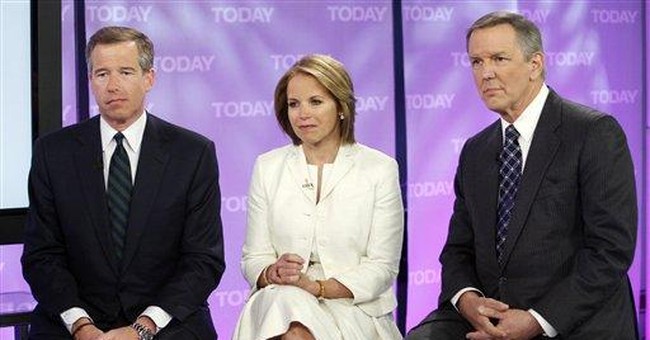 Not long ago, Leslie Bennetts, author of an infamous tome warning mothers that failing to work fulltime for the entirety of their lives is sure to leave them eating dog food out of tin cans, feigned shock when at-home moms everywhere took issue with her collection of sad tales.

She complained to WNYC radio of the “angry comments” left on the Today Show’s website after her interview with Ann Curry failed to create a stampede of homemakers returning to the 8-to-5 grind. She objected on the Huffington Post to the “blistering attacks” of the mommy bloggers and their “highly combative sense of indignation,” never noting that some of that indignation may stem from her likening them to “cranky children.” And she grumbled to the Associated Press about e-mailers assuming she was divorced, lonely, and bitter.

In fact, many of my acquaintances who saw a segment of the Today Show I taped with Bennetts last week assumed the same.

The set-up was simple. I was there to discuss my book, Beside Every Successful Man, a how-to guide that shows women (particularly stay-at-home and wannabe stay-at-home moms) how to help their husbands achieve greater career success, thus making the option of an at-home wife more feasible. Bennetts was there to provide balance to my research (though it is worth noting that NBC producers offered no such balance to Bennetts when her book, The Feminine Mistake, was featured the year before.)

While I answered the first question put to us about Sarah Palin (She’s a wonderful example that women have many choices open to us today; we can do the PTA for a spell then go on to the use those same skills in phenomenal ways…), Bennetts declined to respond. “Basham has cherry-picked her divorce statistics,” she bellowed instead. (I hadn’t). “She’s encouraging women to believe in a fairy tale.” (If so, it’s a fairy tale millions of women live every day). “Depending on a husband is a high-stakes gamble!” (It may be something of a gamble, but the odds—that is, statistical evidence—show that if it’s a bet, it’s a reasonably safe one.)

But the biggest beef between Bennetts and I was that while I have no problem with women who choose the lifestyle she has (fulltime career with children), she could spare no flexibility for my decision to help my husband achieve more in his work so that I will be able to opt-out of full-time employment when we have kids. This was not a reflective, civil disagreement, appropriate to morning programming. Bennetts objection to my personal 3-year plan was grim, loud-mouthed, and unrelenting.

Once home, the women I know (both those who work and those who don’t) were incredulous at her position. “Her husband must have left her,” they whispered to me. He hadn’t, I corrected them. She’s been married—happily, she says—for 25 years. My pals then looked at me in shock. Well, why then, they wondered—is she so angry?

That, I couldn’t answer—especially since they didn’t know the half of it.

Following the segment, the Bennetts who was angry on screen became positively enraged off of it. As I turned from my high Today Show stool to say goodbye, the venerable celebrity profiler began to sputter, and sputter loudly, in my face. “What you’re doing is DISGUSTING!” she shouted, pushing her powdered nose only millimeters from mine. “How can you write something so DANGEROUS, SO DAMAGING to women?!? You don’t even KNOW Elizabeth Warren!”

She had me there, I haven’t ever met Warren, the Harvard law professor whose book The Two Income Trap demonstrates that two-income families are more likely to go bankrupt than single earner ones. Though in the heat of the moment I never managed to point out that it isn’t generally considered necessary to have a private relationship with a scholar in order to reference their public findings.

In all my writing years picturing myself discussing my work on the nation’s most popular morning show, this was something I never pictured—the eyes of the production crew turning, horrified, towards me, clearly wondering if they might need to step in between us like teachers heading off a school-yard brawl.

Even the usually unflappable Meredith Vieira looked distinctly flapped. “I think it’s great to talk about these things,” she told me confidentially in the hall, after Bennetts had exhausted her venom and huffed off, “but geez, she needs to learn to do it respectfully.”

The following day brought round two. Would I, my publicist wanted to know, be willing to face-off with Bennetts again in a forum moderated by that model of restraint, fairness, and level-headedness, Judith Regan? In other words, would I subject myself to twenty minutes of being the Christian in a coliseum run by lions? What could I say, I had a book to sell.

Leaving aside for a moment the irony of being lectured to about self-destructive choices by the woman who bought the OJ Simpson confessional, If I Did It, carried on a barely-concealed affair with a police commissioner with a pregnant wife, and reportedly accused coworkers of being members of a Jewish cabal, the tenor of Regan’s arguments made reasonable debate impossible. She didn’t address the data I present in my book that a wife can have a profoundly positive influence on her husband’s career and that a husband’s upward mobility increases marital happiness for both spouses (which would have been difficult, since it was clear she hadn’t read it). Her line of reasoning ran thus: “Men are bastards. I married and divorced two bastards, therefore I can tell you they are all bastards out to ruin you.” (I didn’t bother mentioning that Regan’s own appetite for “ruining” those who cross her is legendary.)

It is difficult to respond to such a self-referential line of inquiry, and my attempts to answer made it clear that her questions were rhetorical in any case. When I began to explain that 80 percent of moms say they prefer part-time or fewer hours, Regan interrupted with shouts of “That’s because they’re idiots!” When I tried to point out that it is not men doing most of the leaving in America today, but women, Bennetts hollered that this is surely because they’re all being abused (those bastards again, apparently). I might have continued to press the point by arguing that 70 percent of all divorces are not categorized as “high-conflict” (which would surely include abuse). But when they interrupted with predictions that my own husband was sure to someday leave me, I realized we were reaching a pearls-before-swine type situation, and my twenty minutes were up anyway.

The most mind-boggling aspect of Bennetts and Regan’s wrath towards young women who prefer a life different from their own, is that between calling them idiotic and dimwitted, they maintain that they are only acting out of worry over their futures. But what I encountered in Bennetts and Regan was no motherly or even sisterly concern. The dripping derision, foaming tirades, and near-physical confrontation they presented could hardly be based in anxiety over my well-being or that of women like me. Not when Bennetts, before she unleashed the Hyde side of her personality on the Today Show, had politely asked on the way to the set if I had children. Not when I explained—far more honestly than was prudent—that my husband and I had recently suffered two miscarriages but were seeking treatment with high hopes. Not when Bennetts and Regan (who had apparently heard this information from her friend), shouted at me on air that I have no children, so who am I to weigh in on women’s choices. Not when, eyes welling at the violent use to which they put my private revelation, I saw expressions of triumph cross their faces.

Genuine concern doesn’t look that—fury and wounded pride does. Fury that women in their twenties and thirties are increasingly defying the path laid out for them by their arrogant feminist forbears. And wounded pride that the treasures we women of succeeding generations are supposed to admire and covet—an army of underlings to terrorize, standing reservations at “exclusive” Vanity-Fair-connected restaurants, the ability to name drop with the best of them—are little more than costume trash in the majority of our eyes.

Countless working women in the limelight have our respect—Sarah Palin, an unquestionably hard-working mother with little, if any airs, has inspired young women across the nation precisely because of her ability to juggle it all in a loving and functional (if challenging) family. For most of us “all” doesn’t include thinking of our husbands like enemy combatants who are just waiting for the day our paychecks drop below the half-way point to begin oppressing us. And it doesn’t involve belittling friends and family members who think “all” might just be a bit more than they’re looking for.

For us, true feminism is recognizing the contributions women make on both the home and work fronts, not for the enhancement of their own egos, but for the betterment of their communities. It’s a new brand of feminism that allows to respect each other’s choices, and anger doesn’t play any part in it.