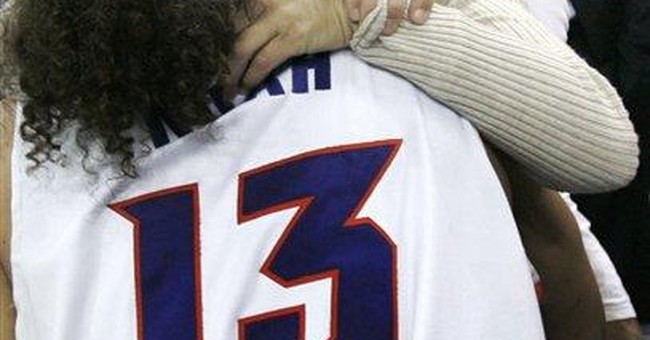 Last year, in response to the increasing numbers of women opting out of the workforce, author Linda Hirshman took to the morning shows proclaiming women demean themselves by becoming fulltime mothers. No matter how much love goes into the labor of cleaning the dishes and changing the diapers, it is beneath their dignity, she insisted.

For the most part, the stay-at-home crowd yawned, flipped the channels and cheerfully returned to the debasing business of shuttling the kids from school to soccer practice. However, while the latest feminist general to take the field in the Mommy Wars has the same end in mind—the return of all women to fulltime work—her battle plan seems far more likely to yield results. Rather than shaming women back into the office, she attempts to scare them into it.

In her new book, The Feminine Mistake, Vanity Fair writer Leslie Bennetts charges that women who step-back from working are taking an extreme economic risk. Book critics and editorialists at major papers and women’s magazines have tended to agree. They may not all appreciate her tone, but they still applaud Bennetts for issuing a “wake-up call” to wives who depend on their men to provide for the family.

Yet if off-ramping is the dangerous “high-stakes gamble” Bennetts and her supporters claim, why are so many smart, rational women laying their money and their futures on the table? Perhaps because even a cursory look at hard data (rather than the collection of sad stories Bennetts has put forth) indicates that, statistically, there is very little to fear from making motherhood a career choice. Indeed, having one partner out of the workforce can actually provide protection against financial ruin.

According to work-first feminists, the scariest bogeyman looming over women who stay home is divorce. Men leave their wives high and dry all the time, she insists. In fact, they don’t. Women initiate about two-thirds of divorces, so the idea that droves of middleclass men are blindsiding their spouses with abandonment is almost as much a fantasy as Prince Charming once was.

Of course, that still leaves the third who will not initiate their divorces, but research demonstrates that the women Bennetts fears for most are the least likely to be a part of that group. Among wives with at least a bachelors degree (the demographic that stands to lose the most career ground by stepping back from the workforce) only 16 percent will divorce within ten years. Given that 60 percent of all divorces occur within that time frame, educated opt-out moms are playing very good odds.

The statistics are also favorable for stay-at-home mothers in general. During the 90s, stay-at-home wives were 40 percent less likely to get divorced than their working counterparts. A 2004 study in the Journal of Marriage and Family revealed that couples have a much greater chance of splitting when the husband and wife earn equal incomes than when one partner is the primary breadwinner. When the higher-earning partner does leave, it is most often the wife.

Numerous studies have found that the better able a man is to provide financially (thus making the option of a stay-at-home wife more feasible) the less likely a couple is to end their union. Taken all together, this makes the average middleclass husband seem about as much of a financial risk as a blue-chip stock.

Still, Bennetts and her supporters argue, a woman who does not work fulltime, uninterrupted over the course of her life puts her family at risk even if her husband doesn’t divorce her. “Some [women] are going to have husbands who become ill or incapacitated, or who die early. And many are going to have husbands who lose their jobs at one point or another,” she warned on The Today Show.

Ignoring for a moment the obvious solution of life and long-term care insurance, she seems to have point. Yet bankruptcy data shows that in reality the opposite is true. Far from offering them a buffer against rough economic winds, women in dual-income families are more likely to face financial ruin than those in single-earner families.

Two-income couples have about a 27 percent greater probability of filing for bankruptcy than families that rely on a single paycheck. The reason for this is simple--where dual-earner families are maxed out as far as possible income and consequently have no safety net in the event of illness or unemployment, single-earner families do. Should the worst happen, the wife can return to the workforce and make up for some or all of her husband’s lost income.

“The two-income family is a more deeply leveraged economic unit, with more of its income committed to a relentless list of fixed expenses, leaving them with less flexibility in times of trouble,” wrote Harvard Law Professor, Elizabeth Warren in The Two Income Trap, a book Bennetts cites but completely misrepresents.. After years of researching bankruptcy, she concluded, “Families in the new economy, with all adults—both mom and dad—in the workforce, face much greater risks than their one-paycheck counterparts.”

Not every woman will want or be able to eschew work completely, but it is clear that a fulltime job is not the panacea of protection that feminists suggest. Sometimes the most economically sensible thing a mother can do—other than making sure that her family has adequate insurance coverage—is follow her heart home.