300 is More than a Bloody Tale of Good versus Evil 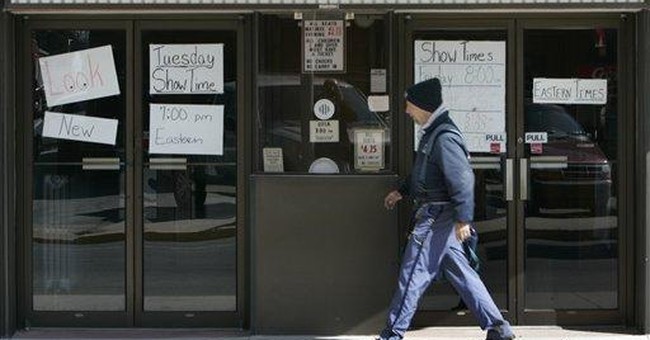 After bringing in more than $70 million in its opening weekend, comic book adaptation 300 made history as the highest grossing film debut for the month of March and the third highest opening for an R-rated movie (after The Passion of the Christ and The Matrix Reloaded). Without a single recognizable star among its cast and a fraction of the production budget, it also far outperformed the opening tallies of predecessors like Troy and Gladiator.

This movie is drawing more than crowds, its drawing hordes.

Despite its hard R rating for nudity and violence, there’s good reason for this. Where last year's despicable, pro-terrorist comic-book-based flick, V for Vendetta, made pathetic claims for cultural relevance, 300 is the real deal. The filmmakers didn't have to impose parallels with today’s geo-political reality; history had already done it for them.

When the Persian King Xerxes demands submission from the entire Western world, with few exceptions, most regions turn knock-kneed and cave. Leonidas, King of Sparta (Gerard Butler) refuses to exchange the future of his people as a free state for a tenuous and temporary peace. Instead, he begins to prepare for battle.

Sparta's Ephors, the cloistered academics of their time, claim that the gods don’t want war and won’t support Leonidas' stand. Rather inconveniently, neither will Sparta's governing council. By law, the king cannot override the will of these two groups, and so he finds a loophole by taking 300 of his personal entourage to Thermopylae, also known as the "Hot Gates," a strategic corridor where they and a few thousand neighboring soldiers hope to hold off hundreds of thousands of invading Persians.

In the meantime, back in the city, an oily politician (Dominic West of The Wire) undermines the King's mission at every turn, arguing for diplomatic resolutions and claiming that Leonidas has started an "illegal" war that will draw destruction down on all. Leonidas wife, Queen Gorgo (Lena Headey), counters that it is Persia who began the war and urges the Spartan congress to commit more troops. Amazingly, for today’s cinema, the oily politician and the waffling congress are not the heroes of our story. Soldiers—single-minded and un-conflicted—are.

Not too surprising then, given the setup and the protagonists, critics from the country’s biggest newspapers are giving 300 a thumbs down.

Award for most amusing lack of self-awareness goes to veteran New York Times critic A.O. Scott who accuses the movie of "the kind of pomposity that frequently mistakes itself for genius." (Funny, I’ve often the same of Mr. Scott’s writing style.)

Yet the pomposity he complains of doesn’t originate with 300’s filmmakers, it originates with ancient Spartan culture.

Dialogue that USA Today’s Claudia Puig calls laughably bombastic, like the Spartan reply, "Come and take them," to Xerxes demand that they throw down their weapons, are copied straight from the pages of history, as are numerous other bits of the movie’s most braggadocios exclamations. It may sound like something conjured up in a Hollywood brainstorming session, but a Spartan soldier did indeed jeer that if the Persian arrows blot out the sun, "we will fight in the shade."

Perhaps if Ms. Puig finds the 300’s unrelenting bravado tiresome, the dialogue too clichéd, and the opposing sides too drawn in "black and white," she should take it up with Herodotus, not a couple of screenwriters. For all its exaggerated combat sequences (this is a comic book movie, after all), 300 deserves credit for staying relatively true to the Greek record of the legendary battle.

Finally, the Washington Post's Stephen Hunter lodges the most refutable complaint of all--that the film "fails to offer any theories of Spartan greatness."

The problem isn't that it 300 offers too few theories of Spartan greatness, it is that, behind all the stylized blood spatter, it offers so many. Not the least of which is that that a people that honors its artists and scholars above its warriors eventually becomes a weak, effeminate people. The grim efficiency of the Spartan career soldiers stands in stark contrast to the brave but incompetent Athenians who hack away at the enemy like, well, like a bunch of actors and craftsmen.

Going hand in hand with this is the demonstration that high military standards must be kindly but firmly maintained, regardless of the hurt feelings such standards might engender. When a well-meaning but physically unfit applicant is turned away from battle, it is clear that Leonidas does not mean to be cruel but to preserve strength of his troop.

Then there are the ideals of Sparta itself, disciplined, controlled, and committed to excellence on every front. Clearly these ideals were taken too far (though does modern America really have room to feel superior to the Spartan custom of discarding imperfect infants?), but their demand for achievement produced achievement. And their unwillingness to become slaves to an ideology from the East helped preserve the tenets of Western Civilization for generations.

Is it any wonder these themes resonated with so few of the preeminent critics of our most popular art? These days it’s not so much about telling young men to come back with their shields or on them, it’s about getting them to pick up a shield in the first place.

The repetitive complaint running through all these reviews about the physical prowess and bold aggressiveness of the Spartan soldiers suggests that anemic intellectual types tend to feel a bit defensive (and perhaps inadequate?) in the face of such traditionally masculine sentiments as honor and country.

Their very discomfort reveals the most significant key to the greatness of the men who died at Thermopylae. Those with the will to win carry the day.