US Chamber Vow to Take on Tea Party a Stupid, Divisive Move 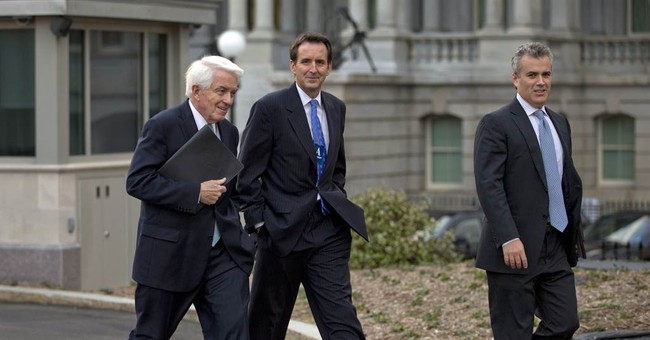 Trending
Could there be a group that looks more insular, elitist and out of touch than the U.S. Chamber of Commerce? One strategist for the chamber says they want "no more fools" nominated for office by the Republicans. By "fools" he meant Tea Party candidates and their ilk, and the chamber is readying to spend $50 million to defeat them in 2014.

This, from an organization that has launched a thousand sinking ships. Recall that this is the same crowd that helped Mitt Romney and John McCain win GOP nominations for president. (They also supported Fred Thompson, who turned out to have the energy of a tortoise.) And the strategist who is credited with this new U.S. Chamber strategy is famous for running Bob Dole's presidential effort in 1996. Now, that was a real winner.)

What these inside-the-Beltway retread political strategists continue to miss is that Mitt Romney's loss to Barack Obama was due in part to a decision by millions of conservative voters to stay home on Election Day 2012. They felt no compelling reason to fight hard for Romney, who seemed good and decent, but lacked fire and had no real connection with most Americans.

Make no mistake: It's not the worst gig in the world to try to nominate sane GOP candidates for the U.S. Senate in states where Republicans are either trying to hold seats or they have a real shot at unseating incumbent Democrats. But the chamber's goals seem at odds with the "average" voter, without whose allegiance few Republicans will win next year. This chamber perspective is both elitist and divisive. And it's likely to backfire.

Consider the U.S. Senate race in Georgia. Incumbent Republican Senator Saxby Chambliss is retiring. One might presume that any Republican who manages to win the GOP nomination in this Red State will automatically cruise to victory against the Democrat.

It's just not the case. Republican incumbents aren't polling so great in Georgia. And while Democrats remain at a disadvantage, partly because of President Obama's high disapproval rate in the state, they will still pose a credible threat with Michelle Nunn, the daughter of former U.S. Senator Sam Nunn, as their Senate nominee. And they will enjoy a "ticket effect" with the combination of Nunn and gubernatorial candidate Jason Carter -- who is Jimmy Carter's grandson.

The most likely nominee for the GOP Senate nomination is longtime Republican Congressman Jack Kingston. He earned his political stripes decades ago and, by most measures, he has good conservative credentials. It's no secret that most "chamber-types" in Georgia and in D.C. are supporting Kingston in hopes that his amiable personality and understanding of the more sophisticated side of public policy will trump the qualifications of any Tea Party types who are running.

But if the chamber's litmus test for Republican nominees is "no more fools," then Kingston might not qualify right now, thanks to his recent suggestion that kids who receive government subsidies for food in public schools should work for what they get.

When considered in context, Kingston's comments are harmless enough. But as political marketing, his words have flown like a lead balloon with Georgia voters. Even the most conservative of talk show hosts ripped Kingston for singling out poor kids and forcing them to "sweep the cafeteria floor" in view of their more affluent peers. If Kingston wins the GOP nomination, his words will be used by Democrat Nunn in TV ads that will help sway especially moderate, independent women voters away from the Republican.

Kingston's ace up the sleeve against Nunn would normally be the fierce and nearly automatic support of ultra-conservative voters. But with groups like the U.S. Chamber picking and choosing who is worthy of joining their "inner circle" of power in D.C., the chance that some miffed conservatives might sit out the race against Nunn, just as they did with Mitt Romney for president, is more likely.

The example of Ronald Reagan is often invoked in situations like this, and with reason. Does anyone who was actually around in 1980 doubt that these out-of-touch political snobs would have labeled him a "fool" before he went on to kick the butt of the Republican establishment by winning the nomination?

Memo to all D.C. geniuses: Think about it.