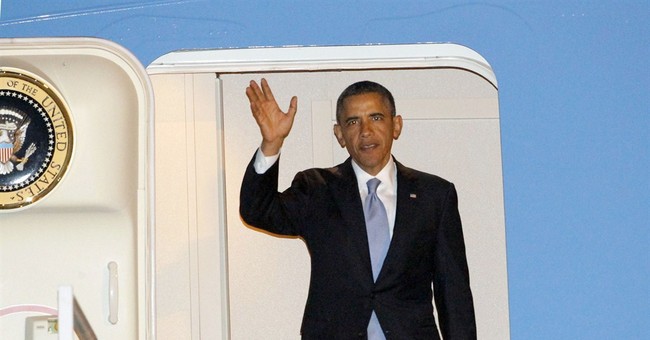 Trending
And the band played on.

As the holiday season approaches, they are dancing on Wall Street with the Dow, S&P and NASDQ either at or approaching all-time highs. And while his popularity is rapidly joining his Health Care Reform Act near the bottom of the political trash heap, the tin-eared President Obama continues to glide on the dance floor of the White House celebrating the Democrats clampdown on filibusters and an ill-advised agreement on nukes in Iran.

But as this year races to an end, there looms a huge set of problems, all interconnected, that could not only end any vestige of political happiness in the White House, but also put an end to the exuberance on Wall Street.

The scenario goes something like this: It begins with a continued unraveling of the Affordable Care Act. With even the likes of CBS News now reporting that millions of Americans will continue to face cancellation of their health insurance, even those who receive those benefits through their employers, the likelihood that Obamacare will somehow turn the corner towards popularity is unlikely.

Looming in the not-so-distant future is another round of dealing with the budget and the debt ceiling. Most experts doubt that even the boldest of Republicans will attempt to shut the government down for a second time. They escaped what looked likely to be an endless avalanche of elite media criticism for their October shutdown only because of the complete flop of the rollout of Obamacare. Its failure was so massive that it actually diverted the media's attention away from their sport of choice -- beating up Republicans.

And the disaster that is the Affordable Care Act is likely to embolden conservative members of Congress to stage their next fight over the issue that, in reality, has been paramount in their minds for years, that of the debt ceiling. That leads us to the other dance partner in our holiday season scenario: Wall Street.

After learning that the Federal Reserve had no immediate plans to stop shoveling printed dollars to purchase our own Treasury bonds, and seeing both the shut down and debt ceiling crisis averted, equities shot up to all-time highs. And that made sense since the low-interest rates that result from the Fed's feeding the beast has left investors with nowhere else to gain a reasonable return for their money.

But the partying and dancing in the East Room of the White House and at posh establishments haunted by the elite of the financial world this holiday season could be followed by a 2014 political and economic hangover of massive proportion.

As the Affordable Care Act continues to draw more critics, it also, through its implementation, is leaving more and more Americans uncertain as to the availability and cost of their health care in years to come. Whether their fear will be reflected in decreased consumer confidence, either in the last few months of this year or perhaps early into 2014, remains to be seen.

But, as we all know from past bubbles that have burst, "leading economic indicators" often aren't so leading. That means that at some point early into the new year, the Fed may feel that the economy is stronger than it truly is and begin the reduction in bond buybacks that seems to have Wall Street gurus quaking in their boots.

About that same time, Congress will start considering the debt ceiling, which by most calculations must be addressed in real terms by March or April. Emboldened GOP conservative members of the House and Senate believe that Obamacare will be so unpopular by then that they will be capable of holding the raising of the debt ceiling hostage as a bargaining chip to kill off Obamacare. They might be right.

But by around March it is possible that the wizards of Wall Street will suddenly feel a squeeze from the Fed. That could come just as they suddenly realize that conservatives might just have the juice and the courage to call the bluff of President Obama and the endless parade of bankers and CEOs he always frightens into joining him, who will be demanding that, once again, the nation should take on more debt.

Of course the elite media and pundits will expect the Republicans to back down for fear of dire economic consequences. What many of those Republicans will know is that, but that time, the party for the White House and Wall Street may well already be coming to an end both politically and financially.