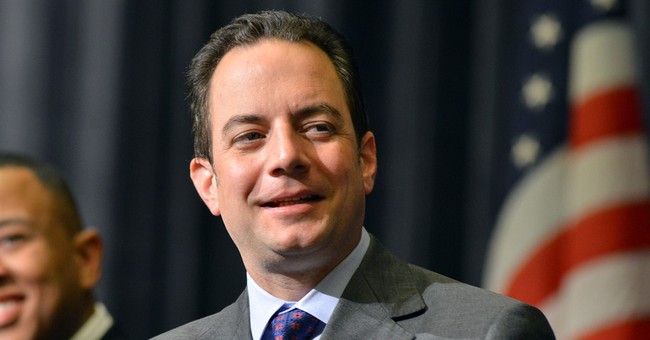 Trending
For the record, I do not know the Republican National Committee chairman Reince Priebus. I'm told he's a nice person, and I understand shares membership in a collegiate fraternity. But nice guys with lots of experience as president of a student body or as an aide to some state legislator or even as a lawyer for the national GOP -- all of which he has accomplished, just won't cut it anymore.

The RNC and its many "affiliated groups" gave up on GOP nominee for governor of Virginia Attorney General Ken Cuccinelli. They likely relied on the same old bunch of hack consultants and pollsters who reported that Cuccinelli was dead in the water and could never be revived. They sat by and watched the Democrats and their well-oiled machine, made up of a confederation of outside money groups, savage the Republican nominee with ads focusing on turning out female voters based on Cuccinelli's very pro-life and very conservative positions on social issues.

This race was a preview of how Democrats intend to run their gubernatorial and U.S. Senate races in 2014. They will pour the money into TV and social media, paint every GOP nominee as anti-women (even female nominees), and pound them with negative ads until their nose bleeds Republican red.

The argument over who is "too conservative" to be electable and who is "too moderate" among Republican professional money grabbers is really a bit off base given the fact that no matter who the GOP nominates in the 2014 races, they will be taking on what an increasingly large number of Americans believe is a government leaning too far to the left. President Obama's liberal philosophy is no longer a novelty to voters, but instead one which threatens their very economic survival.

It is clear that the problems with the Affordable Care Act are not going away. And those problems are much greater than simply the failure of a website. Contrary to confusing press reports, it is not just employees of mom-and-pop shops or individuals out on their own who are getting notices in the mail saying that their health care plan is being dropped because it does not meet the required coverage mandated by Obamacare. In reality, companies across America that employ hundreds of people are having their plans cancelled as well. They may be technically classified as "small businesses," but they start to add up very quickly and are increasing in numbers daily.

And just wait until you hear the true "qualifications," or lack thereof, of the so-called "navigators" who will assist the less computer savvy in trying to sign up.

The Affordable Care Act was seemingly built to fail. Whether it was designed to make us all throw up our arms and say "uncle ... give us a single-payer system" remains to be seen. But the likelihood that this turkey will fly is ... well, it's obvious that it won't.

That brings us back to Mr. Priebus. When you are head of an organization that is not nimble enough to seize an obvious opportunity, such as the Obamacare fiasco, to win a critical "test" race, you probably need to move on and let some fresher folks take a stab at it.

Moreover, when your 2012 presidential candidate lost because he was savaged with attack ads and overwhelmed by a targeted social media effort, you should have learned some lessons. But instead, the national party sat back and allowed their nominee in Virginia to suffer the same fate. Reportedly, the national party and its affiliates spent less than a third of what they spent in Virginia four years ago (and that is likely being overly generous as to the actual amounts).

I have alluded often to the Republican's basic problem of being held hostage by the same old consultants or newer ones who are part of that "fraternity" in Washington. They only know how to repeat what they've done before. And they all talk to one another, so they only stay in touch with the slick world of GOP operatives. Hence, they get bad polling, bad ads, bad advice and terrible results.

It dawned on me that in writing this weekly column, I receive almost daily communication from the DNC and other organizations related to them. Not once have I received even a press release from the Priebus crowd. Admittedly, there are much bigger fish to fry than me. But it causes one to wonder, if the only communication people get is a prefabbed, phony grab for money in the mail, or an annoying call begging for cash at dinnertime, and that money never even gets to candidates in big races like Virginia, then what good is being accomplished?

The answer is, not much.

Matt Towery is author of the book "Paranoid Nation: The Real Story of the 2008 Fight for the Presidency." He heads the polling and political information firm InsiderAdvantage. Follow him on Twitter: @matttowery. To find out more about Matt Towery and read features by other Creators Syndicate writers and cartoonists, visit the Creators Syndicate website at www.creators.com.