Democrat Senate May Depend on a Nunn and a Carter 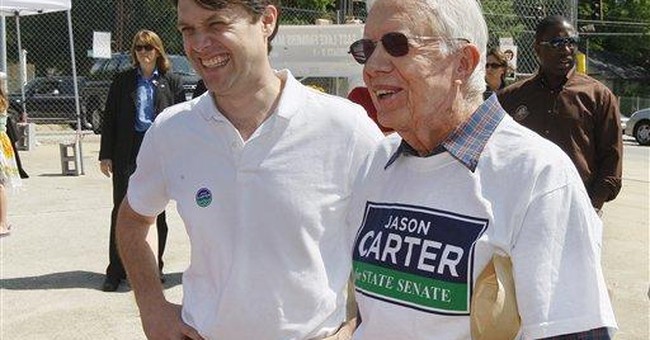 With the current debacle of the Obamacare "failure to launch" in full swing, it may well be that Democrats have little, if any, prayer of keeping their control of the U.S. Senate after the 2014 elections. Given the fact that a good number of seats currently being held by Democrats are either being abandoned or could be taken by Republican challengers, many pundits are talking up the potential of a Republican takeover of the Senate midway into what so far has been a fairly disastrous second term for President Obama.

But Republicans are known for looking a "gift horse in the mouth" by getting too cocky too early, and 2014 could end up as disappointing as the 2012 presidential contest.

It may well boil down to one state providing the edge to the Republicans or Democrats. And there may be shaping up a phenomenon so rare in politics that it could turn what seems to be a very "red" state -- Georgia, into a jump-ball, Hail Mary contest of massive proportion.

Republican Senator Saxby Chambliss is leaving the Senate having had his fill of some in his state that did not take kindly to his more courtly approach to the Democrats. Ironically, Chambliss would likely have won reelection in 2014 with the courts having moved Georgia's primary to a date more convenient for moderate Republican voters.

With Chambliss leaving, a raft of GOP congressmen is joined by a retired CEO with deep pockets and a former Secretary of State to contend for the GOP nomination. Most pundits assume at the moment that Georgia, which abandoned the Democratic Party in 2002 and hasn't looked back, will keep on trucking as a red Republican state. And even today, that is the most likely result. But ...

And, as they say, "it's a big but." Democrats have managed to push Michelle Nunn, the daughter of legendary former Democratic U.S. Senator Sam Nunn as their "anointed" nominee to compete with the ultimate Republican victor in the November of 2014 contest. Nunn's advantage really isn't in name identification, given that her respected father has been out of office for many years and is not widely known by today's voters. Rather, her plus is the ability to reunite what is left of the old Nunn political machine and raise dollars from around the rest of the nation based on her father's connections and those she created as the head of a major non-profit organization.

That by itself might get Michelle Nunn to within waving distance of the Republican machine in Georgia, but not to the finish line in first place. But here is where things get very interesting.

Georgia State Senator Jason Carter, who is a Democrat, is a bright and attractive young man who belongs to the minority party in Georgia's Senate chamber. Usually, that wouldn't merit a mention in a national column. But he's serving in the same chamber that his grandfather served in, before he became governor, and then president ... of the United States.

Jason Carter is Jimmy Carter's grandson, and he's suddenly thinking about doing what his granddad did -- running for Governor of Georgia. And if he does, Republicans need to watch out.

Carter would be taking on incumbent Republican Governor Nathan Deal, who by most accounts has been a levelheaded and strong leader for his state and a man who is approachable and likeable, which is a rarity in modern politics. But through a series of gaffes and miscues by others, Governor Deal has been portrayed by his opponents and in the media as being unethical. And as the typical shenanigans that accompany any election year unravel, his reelection appears just slightly more vulnerable.

Deal faces two Republican primary opponents who he should handle with relative ease. But if Carter were to enter the race, his candidacy would receive national attention, and the money that would flow to him from "friends of Jimmy" and Democrat-leaning organizations would only amplify the amounts going to Ms. Nunn. Carter would present a genuine big-time Democratic opponent for Deal.

Beating an incumbent governor in Georgia is hard to do. Carter could easily fall short in his bid, as did his grandfather in his first run for the state's top office. But he would lose only what his grandfather did: a few years in a legislature on his way to the governor's mansion and beyond.

And the added excitement and momentum from a strong gubernatorial race might, were a weak GOP candidate to emerge as the nominee, help Ms. Nunn capture a seat in the U.S. Senate.

Without Carter in the race, a Nunn victory seems a much bigger longshot. But if a "Carter-Nunn" ticket develops and the two can extricate themselves from a very unpopular Barack Obama in Georgia, anything might happen. Something for GOP pundits to consider in the coming months.