The Pride and the Prejudice of King Speech Memorial 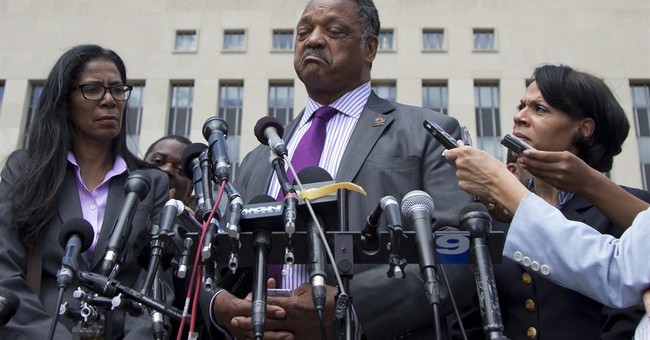 Trending
Jesse Jackson says the tea party is the resurrection of the Confederacy. It's an example of sad prejudice in a sea of pride.

As one who has had the pleasure of knowing or working with several members of Dr. Martin Luther King Jr.'s immediate family, I felt great pride when Martin Luther King III began his speech commemorating his father's address of 1963 not with words of divisiveness, but with words of love -- true, in his words, "agape love." And Martin King already had made it clear that his greatest concern was for the plight of young black males, a plight deserving such love and attention.

As of 2010, the African-American population in the United States was just under 13 percent. But based on the number of controversies, arguments, confrontations, condemnations and other such matters in the media, one would imagine that percentage to be much higher. So why does the plight of African-Americans in this nation seem to greatly outweigh their percentage of the population?

The answer is complicated, with blame and responsibility on all sides of the political and social landscapes.

On the political front, many conservatives and Republicans have seemed cold toward acknowledgments that discrimination can and does still exist. And because black voters abandoned the GOP in 1960, never truly to return, Republican efforts often have appeared to be exactly what they are: token at best.

But on the Democratic and "progressive/liberal" side, there is equal blame. Perpetuating a cycle of dependency on government programs and public schools that provide no incentive to properly teach or learn has created a huge group of poorly educated and justifiably angry African-Americans, many of whom are male and disproportionately fill our prisons and welfare rolls, many of them literally born without a chance to succeed.

Where the fulfillment of Dr. King's dream really starts to fall apart, though, is in the shameless use of race to gain office or riches or both, all to the detriment of those who desperately need help. Yes, there have been plenty of opportunities for conservatives who see no hope of winning black votes to draw electoral districts, create new political subdivisions or simply throw all social programs out the window to please those who have grown weary of hearing about one segment of America.

But they are in part able to do this because of the misuse of race as "a card" to be played by some so-called activists, even when race has little to do with a particular policy or news event.

The past five years have seen no improvement in race relations in America. Quite frankly, they are worse today than when Barack Obama took the presidential oath of office in 2009. That is in part due to the very bad economy Obama inherited and a series of "stimulus' efforts that really provided little in the way of long-term jobs for those who needed them the most. Endless comments concerning racially charged issues such as the Zimmerman case have not helped improve things.

But the plight of those in the African-American community who still struggle cannot be laid at only the president's feet.

Neither Republicans nor Democrats, conservatives nor liberals, have done much to solve the underlying problems facing a large segment of African-Americans in America. Obviously, throwing government dollars at their problems without thought or accountability has done little to help. And using the plight of millions of African-American men as a political football or as a means to gain personal fortune for a relative few has not worked, either.

Worst of all, when the true family of Dr. King speaks of love and freedom for all, the words of those who broadly paint individuals who seek liberty as bigots are not only disappointing, but serve to set back Dr. King's cause. This is particularly so when those words are aimed at people who embrace the "tea party" philosophy, one rooted in freedom and liberty, the cornerstones of Dr. King's message.

Dr. King's family members say much more needs to be done for minorities in America, but they also thank the American people for the great progress that has been made in the past 50 years. They spoke without casting sad or misdirected stereotypes. In their words can be found the true message of Dr. Martin Luther King Jr.