Heard of Kasim Reed? He May be Your President Someday 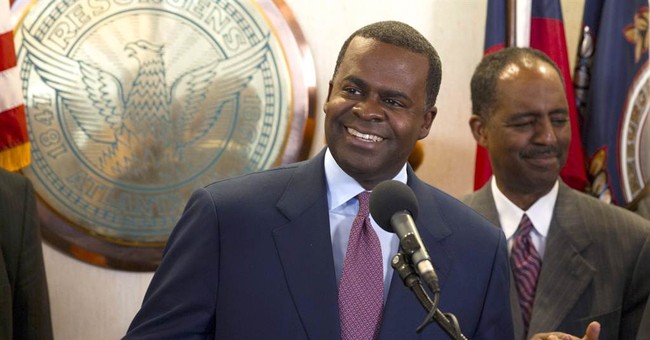 As of now, the GOP seems so hopelessly at war among its own members and without a coherent message that it appears more reasonable to take the time to consider America with a string of potential Democratic presidents in our future. With that in mind, here is a name to consider in the coming years -- that of Kasim Reed. Known only to his own constituency and some national insiders today, his name is starting to rise in awareness among the public and will likely be met by the same quizzical looks that the name Barack Obama received, say, in 2006.

But believe me, it is a name that could easily become oh-so-presidential in the coming years.

Reed is currently the mayor of Atlanta, a position that has produced plenty of top national Democrats. The best known of those is civil rights icon, former Congressman and former Ambassador to the United Nations Andrew Young. And while Young is a Democrat, he is revered even in Atlanta's most Republican sections of the city proper.

To understand Young is to understand, in part, his protege, Mayor Reed. Young certainly adheres to most Democrat policies. But he has always been known for keeping an open mind and avoiding partisan battles. And he's never been afraid to part ways from liberal ideology when he has felt the need.

We have reached the moment in time at which not only will America accept an African-American president, but at the end of eight years for President Obama, voters 35 and under will likely associate the presidency primarily with an African-American in the White House. That's a powerful demographic with a hugely new perspective for whom Reed, who is African-American, would appeal.

And it's most likely that those who seek to find the next Barack Obama among Democrats, like those who wanted another JFK or for Republicans another Ronald Reagan, will be looking for someone who has obvious similarities.

A unique first name like Barack might be a good starting place. That unique first name would have been a political negative just 10 years ago. And while everything is not in a name, Kasim will be a valuable commodity in Democratic primaries in years to come. It will be just as unique as Barack in a "Hall of Presidents" where names like George, John and James now symbolize the past to younger voters.

And Reed has the looks and the communications skills of Obama, and is arguably better.

Searching for more tangible similarities Mayor Reed, like Obama, served in his state legislature. Reed served much of his time in the Georgia General Assembly, with Republicans in control of parts or all of state government. While clearly a Democrat with Democrat policies, Reed managed to gain a comfortable relationship with his GOP colleagues and a strong reputation for displaying a willingness to work with Republicans when possible.

As Atlanta's mayor, Reed has built a strong relationship with the city's business community and continues to work well with Georgia's Republican governor and legislature. Even Young would likely admit that his protege's experience in the state legislature has allowed Reed to have a stronger relationship with state government than most, if not all, of his modern-day predecessors.

So for most of the nation the question remains: Why is Reed potential presidential timber? After all, he's not been a governor, U.S. senator or even a member of Congress.

The answer can be found in the Sunday morning talk shows, such as "Meet the Press," where Kasim Reed has become a "go to" guest. Add to that visits to the Oval Office, like the one Reed had with President Obama and another civil rights icon, Rep. John Lewis, in late July to discuss the Voting Rights Act. If politics had an early radar detection system for likely fast-moving stars, Reed would be showing up and climbing fast.

And as for that other qualification of holding high state or federal office, make no mistake that when and if the day comes that any number of powerful Democratic congressmen in Georgia, such as Lewis, retire, Reed could waltz into the seat. Many observers believe an open gubernatorial seat in Georgia could be a Democrat's in 2018. Reed could fit that bill, as well.

Ironically, many lament the days when the archconservative Speaker Newt Gingrich and the steadfast Democrat President Bill Clinton took strident stands on issues, but managed to reach compromise. Where the GOP's future Gingrich will be found is anyone's guess. But Reed may well find himself in Clinton's role in years to come, particularly if the GOP can't field a winning ticket or stop eating its own.