When the Messenger Gets Shot, Others Are Sure to Follow 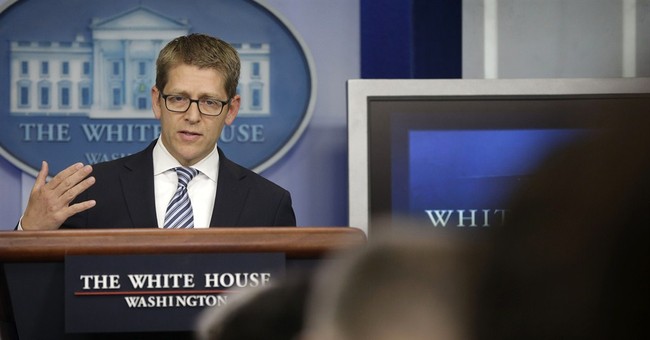 Trending
In the world of White House politics and the politics of handling the White House press corps, the president's press secretary is the most visible target and often the first to fall when the media turns on an administration. And it appears that press secretary Jay Carney may well be approaching the point at which his deft handling of the media in past years suddenly becomes a liability in the middle of not just one but multiple presidential controversies.

I have known a few other past presidential press secretaries, but not Carney. As a rule of thumb, I would say that, although they always press their man's case with careful but passionate words, presidential press secretaries generally tend to be one of the highest ranking members of any administration who behind the scenes understands the gravity of an issue or scandal and are more grounded in the reality of a situation.

In Carney's case, I have no visible indication that this is the case -- but based on his background, I suspect that he follows that rule of thumb. Born in Washington, D.C., with a Yale education and a Time magazine Washington Bureau background, there isn't much doubt that Carney understands, at the very least, the mindset of the D.C. bubble. While it would be hard to argue that his pedigree suggests much in common with the average American, it is one that is likely of value in his current position.

And regardless of how those who view him nightly or grill him daily feel about Carney, we can all marvel at how young he looks to be 47 years old. Even the burden of speaking for President Obama has not seemed to age him.

But despite his boyish looks, it seems likely that Carney is more than aware that he has recently gone from being a comfortable presidential spokesman to that of a presidential messenger facing "fastballs" and "curves" from a press that just a few months ago was not into playing hardball. And why is that? No, it's not because of Benghazi, and no, it's not even because of the IRS picking on conservatives. Does anyone think that those issues would get anyone but the so easily dismissed and looked down upon "conservative media" riled up? The answer is "no way."

No, the White House briefing room has turned nasty as of late because the Obama administration is perceived as having snooped on The Associated Press and, now it seems possible, other news organizations in the name of national security. If the alleged offense were against only Fox News and one of its reporters, well, that wouldn't have whipped an entire press corps into a frenzy. And of course the "mainstream" media can't possibly keep centering their questions over the DOJ's examination of AP phone records because it would appear too self-serving.

So for once the Obama administration is having to face something other than "friendly fire," and the easiest target happens to be the right one -- no pun intended. The endless versions of who knew what and when concerning the IRS targeting of conservative groups over tax exempt status just keep on keeping on. The number of administration officials who knew about the transgressions and the length of time during which they knew of it continues to grow. And whether Carney's first statements, which suggested no knowledge on the part of the administration until, in essence, the first leak of the story in the press, were due to a cagey effort to dodge or a case of an "unlucky Pierre" Salinger-like case of being kept out of the loop, only Carney knows.

But just as the press accused Salinger as JFK's press secretary of playing dumb in claiming he knew of no meetings related to any possibly offensive weapons being installed in Cuba (Salinger was intentionally kept in the dark by Kennedy's top aides), they suspect Carney has been splitting hairs and tailoring words to fool them. And now with an IRS official making a defiant opening statement before a House Oversight Committee and then invoking her Fifth Amendment right not to self-incriminate when asked questions, there seems even more cause to doubt the reliability of those involved with the matter.

And so the question becomes that of whether the messenger, Carney, will take a "political bullet" for the administration. If so, it is likely that others far more culpable will fall, as well. Carney may not just be the messenger, but perhaps the canary being lowered into the mineshaft to see if there remains any oxygen to survive this growing story.