Americans Want Bomber, If Convicted, Put to Death as Case Grows in Complexity 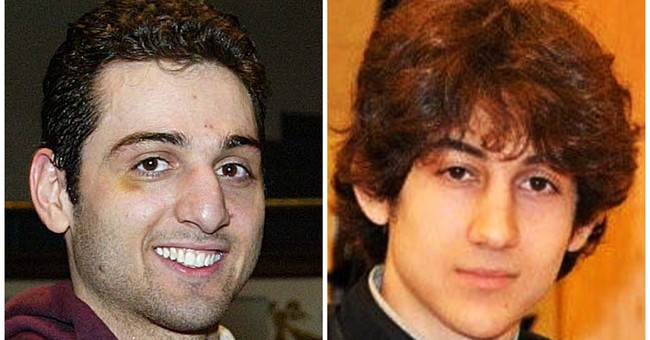 Trending
An ABC News-Washington Post survey shows that well over 70 percent of Americans want the surviving accused bomber of the Boston Marathon to be executed if found guilty in a court of law.

Executed, as in the vicious manner in which he and his brother allegedly took innocent lives at was to be a happy and joyous athletic tradition.

Executed, as in the cold-blooded manner in which they assassinated a security guard at MIT.

Executed, as in a carefully planned, methodical elimination of life and limb -- something the accused may understand all too well.

So now here is the real question: Does anyone really believe that President Obama would favor the execution of this young man if he were convicted of the serious charges he faces?

And the stories that are developing around the bombing of the Boston Marathon, including the arrest of several students who are accused of lying to officials and obstructing justice and news that the mother of the two accused bombers was also on a potential terrorist watch list, might be making it harder for even President Obama to take a less hardline view of the case.

Increasingly this case appears to be presenting us with a prime example of how terror will manifest itself in America, and around the world, in the future. Individuals who have either entered the county legally or even been made citizens will take their resentment for their own failures to succeed in this nation and turn to radical forces to be encouraged and trained to attack innocent Americans.

And, because they will increasingly be coming from within our own assimilated ranks, they most likely will have friends and associates who know of their feelings and their inclination to do harm to others.

While the president warned Americans not to leap to conclusions just a few weeks ago, the events that are unfolding were easily imaginable at that time. Yes, if they had relatives and friends who never called the FBI or other law enforcement agencies to identify the two likely culprits, then they likely have a wider cast of characters who either sympathized with their actions or at the very least placed relations and friendship above a duty to justice.

The mother of the accused bomber was in fact on a watch list, as was his now dead brother. The charming manner in which the mother has comported herself alone makes one wonder about her true role in all of this, if any.

The friends from school who not only failed to reach out to authorities once the two suspects were shown on surveillance cameras to the entire nation, but who allegedly actively attempted to hide evidence or information come as no surprise. Most Americans did jump to conclusions, and these types of involvement coming from others is likely what most were imagining.

And let's be honest here: Most of us likely believe that the Obama administration's approach to both the accused killer and those around him will be cautious and tepid -- full of bold statements but lacking the "severity of the law" that this administration so often claims to seek out.

This case is becoming stranger and stranger in the sense that we have others charged, some question as to whether DNA links a female to at least one of the bombs, and the overwhelming belief by many that these bombers, while "homegrown" in a broad sense, likely had either training or assistance from others beyond our shore.

There are now too many people, too many intricate pieces to the puzzle, and too much defiance of the law and what is right here to simply write this chapter off as the act of lone and youthful wolves.

This looks like cold and calculated terror that sprang forth from the heart of more than just one dominant brother.

This looks like murder most foul -- terror most extreme -- and a case where, if found guilty, the man responsible should, as most Americans now believe, be put to death.