Farewell to a Hero, Al Haig 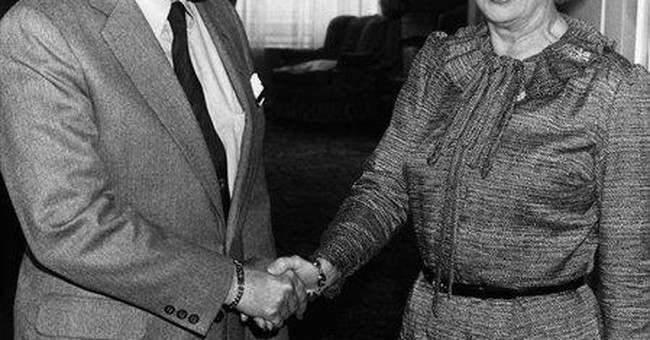 My recent bouts of vertigo, and the fall and concussion that resulted from one of them, meant that I was unable to attend the funeral services for a great American, Al Haig.

So I'll eulogize him as best I can in this column space. Thank you, Gen. Haig. Had it not been for your decisive thinking and iron resolve in essentially acting briefly as our president during those grim days at the Nixon White House in the summer of 1974, America could easily have become a vulnerable target to the Soviet Union or other enemies.

I was an acquaintance of President Nixon. He was indeed brilliant, and became wise with age. And yet as my minor misfortunes of late have briefly confined me to "roaming the halls" of my home, I recall that Nixon, in his final days as president, wandered the halls of the White House -- a much bigger place than mine!

Few know that a humiliated and sickened Nixon had made it clear that no important action was to be undertaken on behalf of America without the consent of his chief of staff, Haig.

Fast forward to spring 1981. President Ronald Reagan was shot and severely injured just months after being sworn in. I was a young U.S. Senate aide at the time, but I knew the score. For hours, the White House gave the impression of internal chaos. The Soviets knew about the assassination attempt before the American media did. Vice President George H.W. Bush at first couldn't be reached. I think he was in a plane somewhere over Texas.

Haig understood the Soviets. Immediately he recognized that they might try to exploit this moment of perceived American weakness. He rushed into the White House pressroom and uttered those now famous lines about how he was in the White House and in charge. His choice of words was terrible, given that, constitutionally, House Speaker Tip O'Neill was second in line of presidential succession after Bush.

Except that he wasn't. O'Neill was a giant of a man and politician himself. But he wasn't at the White House at that crucial time. Plus, the Soviets, knowing O'Neill was a Democrat, might have entertained notions about him spearheading a coup. A silly thought to you and me, but not to Moscow. Not in those days.

In Washington, then as now, titles and turf and status are paramount. When Haig got his constitutional succession order out of whack, critics pounced on him like ravenous wildcats.

But Haig never regretted it. "I had to let (the world) know we were in business ... that we had control of things here," he said years later. He was right. He knew that issues infinitely more important than his or anyone else's status or ego was at stake. And he acted by saying something that appeared self-serving, but was really high patriotism during a crisis.

Many years later, I got to know Haig. Am I ever glad I did. I used to kid him and call him the "38th president of the United States" for that month or so he essentially ran the Nixon White House. He just laughed.

I'll always remember Haig from when we gently floated on a boat down the Intercoastal Waterway on a warm Florida night, talking politics. It wasn't our only time together, but it was the most special. I can only pray that his spirit will gently continue that sweet voyage. He deserves it. My condolences to his lovely wife Pat and his family. He will be missed.