We Are All Tumbling Down 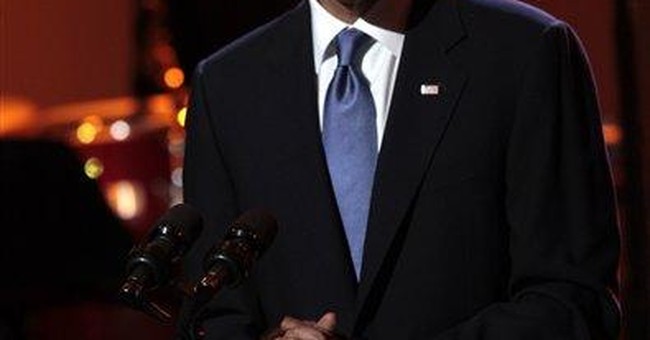 Readers of my column may recall that a month or so ago, I wrote that President Obama's approval rating would soon begin to drop, as would the stock market. I'm no psychic, but both proved true.

So now we're all tumbling down. I quite literally tumbled myself, some weeks back. The vertigo that I get from flying caused me to fall and crash my head, giving me a concussion.

Some of you may be applauding, or thinking that a good kick in the head might be just the prescription to clarify my thinking processes. But never mind.

America is in a helluva mess. We have a proposed federal budget that will send spending through the roof. Our lax outlook toward terrorism has suddenly dissipated, as the nation is now on high alert. And Washington, D.C., is buried beneath snow, which may be a blessing in disguise. Oh, for the good ole days of global warming.

Our polling indicates that 2010 may turn out to be the most virulent anti-incumbent election cycle in a long while. I was around for the last time. It was 1994, when Newt Gingrich and his band of brothers captured Capitol Hill. The dirty secret is that we didn't realize we were going to win the Congress until days before the vote.

So here's today's real issue: What are Republicans and conservatives to do as the nation turns quickly away from Obama and the Democrats? Recently, there has developed a schism in the Republican-conservative world between self-proclaimed Tea Party conservatives and others who consider themselves pragmatists. If the GOP and conservatives ever hope to take advantage of the absolute political disaster that has taken place, they must first find a way for the two factions of the conservative movement to embrace each other.

I've been around long enough to know what divisions within the GOP and among conservatives are like. In 1976, the unabashedly conservative Ronald Reagan did what some in the Republican Party at the time thought was unforgivable: He ran against the incumbent GOP president, Gerald Ford.

As I often remind readers, when Reagan ran again in 1980, he was considered persona non grata among so-called "establishment Republicans." It wasn't until he grabbed a microphone during a debate in Nashua, N.H., and basically told everyone to kiss his rear end that he became not just a serious candidate, but the leader of the party.

I am well aware that there is an internal battle going on -- stoked by mainstream media -- between Sarah Palin and the rest of the GOP. Whether Palin is fit to be president is not relevant to my point. She has the conservative movement revived and moving again.

Are there other names within the party that might be better presidential timber? Newt Gingrich, Mitt Romney or Mike Huckabee? Perhaps -- but no Republican or conservative should stand for the pummeling that Palin is taking from media that try to make her look foolish by contrasting her style with Democrats.

Finally, because I am a non-partisan pollster, let me address what I expect to be Obama's future. His health care bill is dead on arrival. His climate-control initiatives are buried somewhere beneath the frozen tundra.

My guess is that the economy somehow will start to rebound, and the president's approval numbers will eventually recover, too. I'm just calling it like I see it.

But none of that has anything to do with whether the GOP can take back the U.S. House or win more Senate seats this fall -- or, for that matter, with whether they can even get on the same page with one another for the 2010 campaigns.

In 1994, when Gingrich and the Republicans won Congress, America was hardly in desperate straits. Yes, there was anti-incumbent sentiment among voters; and yes, President Bill Clinton's flirtation with health care reform helped fan the political flames. But Clinton was not as unpopular then as Obama is now.

The Republicans won Congress in '94 because they had a specific set of ideas they presented to the American people. I'm not advancing the idea of some "litmus test" issue or issues that all GOP candidates should subject themselves to. But the party needs a set of specific, significant policies that the nation can understand and embrace.

For the apparently rising Republican Party to avoid un unexpected political "concussion," it must bring together its brightest minds -- those outside of Washington, that is -- and create the next set of proposals to move the nation forward. Otherwise, all their hopes and dreams of ridding Congress of Nancy Pelosi and Harry Reid will prove nothing more than a temporary triumph.

I Will Not Be Silenced!
Townhall
'Damning': Raw Story reports that states led by GOP governors had higher COVID-19 death rates in 2020, but…
Twitchy
Racial Appropriation in a 1986 Hit 'Haunts' Self-Described White Actor Fisher Stevens
Redstate
Adults in the Room: Retired Military Brass Not Afraid to Voice Their Concerns About Biden
PJ Media