"Separate But Equal Proms" … Not With My Money 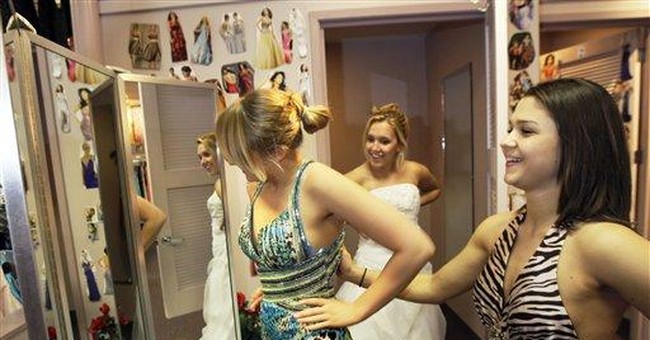 ATLANTA -- Recently, I took part in a panel discussion about diversity and its impact in media. Rick Sanchez of CNN moderated. It was held in Atlanta, where my family goes back generations.

We touched on a lot of issues, and we panelists seemed well received by everybody there. At one point I noted with pride that I considered metropolitan Atlanta, made up of nearly 5.5 million people, to be one of the most racially "in tune" places in America. I pointed out that with most Atlantans, the concept of knowing, working with and having deep friendships among the races was one that came more automatically than it does in most other American big cities.

Imagine my horror when The New York Times magazine reported on a small county in rural Georgia where recently an apparently longstanding tradition was continued. The magazine's reporter was there to capture every pathetic and miserable moment of it.

Montgomery County High School students held two private, separate senior proms, one for whites and another for blacks. The article suggested the black prom was open to all, but no whites attended. The white prom, according to the story, had an unspoken "invitation only" reputation. As I looked at the pages and read the story, my heart sank. Then I got mad. Really mad.

I am a non-partisan pollster who keeps my work completely objective, but with a history of being a former Republican Georgia legislator and a past strategist for Republicans such as Newt Gingrich, my nationally syndicated column often focuses on the more conservative side of the aisle.

But sometimes the term "conservative" is misunderstood.

I guess that in 10 years of writing, the one column of mine that created the most friction was one a few years ago. I wrote a piece to set the record straight about a young man named Genarlow Wilson, who happened to be black, and who happened to have been sentenced to 10 years of mandatory jail time under a law I authored as a state legislator many years earlier. The bill's intent was being misinterpreted, and Wilson was being persecuted for actions that went beyond the findings of the jury.

A lot of people felt I wasn't so conservative when I wrote that column. I didn't give a damn. And I'm not concerned about reactions to this one either.

I believe in freedom of speech, privacy, the right to choose one's friends and freedom of association. Truly private matters are none of my business.

What is my business, as it is the business of every taxpaying citizen of Georgia, is that some of the state tax dollars we pay make their way to Montgomery County and its school system.

In the magazine story, students were quoted as saying they would like a prom that included all of the school's students. But the principal, citing "poor attendance" at a 1995 attempt at an all-inclusive prom, said there were no plans to try it again.

Now this is likely a man trying to hold on to his job. I understand that. But indirectly I, along with many other Georgians, have to support his school financially. And I'm livid.

By law all Georgia taxpayers help maintain some part of Montgomery County High's "reputation" and "brand name" through the state's rather interesting system of redistributing school tax dollars to financially less fortunate areas, including Montgomery County. Teachers receive state funds, grants are given, and the school's students are eligible for Georgia's well-known HOPE college scholarship. In other words, all Georgians have a little ownership in Montgomery High.

While it might be impossible to prevent private parties -- indeed, I would fight for the right for individuals to invite whomever they wish to their own events -- there is still plenty that could be done to end this practice In Montgomery County, or anywhere else it might happen.

Don't tell me that part of the "organization" of these private proms doesn't occur on campus. Such activity should be disallowed. Not on my dime or on that of millions of other taxpayers.

Don't tell me the segregated proms don't use the name of Montgomery High School when they create invitations or make announcements for these events. The use of a "brand name" paid for with tax dollars that promotes a separate "but equal" policy in this day and age should be forbidden.

And don't tell me that the county's school officials can't attempt to do what most schools in America do -- help arrange a school prom that every student can attend.

It is offensive when people somehow imply that having a more conservative viewpoint equates to supporting racist views. It does not and everyone on all sides of the political spectrum should be disturbed over the story of "the two proms." We have elected an African-American president of our nation, but a school system in a rural county that is in no way representative of the state of which it's a part wants to keep things like they were in 1960. Surely Montgomery County can join the 21st Century.