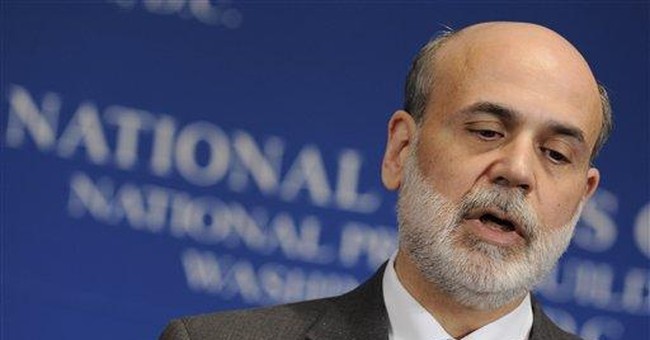 I promise this is the last time I will refer to my new book, "Paranoid Nation." But not in my wildest dreams could there have been a more fitting title or theme to reflect the onslaught of insanity we're bombarded with these days in media. Policy overkill is ruling the times.

For starters, look at the banks. They got hoards of bailout money, but lending hasn't increased. And now that there are restrictions on the use of the funds and the salaries of their executives, many of those same institutions say they won't need a second round of bailout money after all!

Plus, the markets were spooked by the dearth of details provided by the new Treasury secretary on how that second round of aid to financial institutions would work.

Then there are the automakers. Suddenly we learn that they need billions more just to hold on through March, even as they play footsy with the unions by negotiating fake concessions, such as union workers not being paid any more than American workers are paid by foreign automakers. Do they think we are idiots? The foreign automakers are paying Americans as they do because the domestic automakers were paying inflated compensation to start with. The auto industry is hopeless and must be allowed to go into bankruptcy to effect genuine reorganization.

Now for the "stimulus bill." Here we have the largest single appropriations legislation in our nation's history, crafted in a matter of three weeks and voted on without a single member of Congress having read the whole thing. Polling shows that the legislation had only modest national support and, as bits and pieces of its endless bag of goodies are made known, its popularity continues to sink.

Every day we read about new lay-offs in most sectors of the economy. We are told that fear and panic have gripped the nation. Fear of the loss of income has most people sitting on their cash and credit.

Isn't it amazing that we went from immigration being the big topic of concern just a little over a year ago to being told now that the world is on the verge of economic collapse?

The fact is we are being driven into something beyond paranoia and bordering on hysterical paralysis. The culprits are politicians. They want us to believe that throwing a billion dollars here and 10 billion there is routine stuff, as long as it's in the name of alleviating some sort of national emergency.

Now we're being scared witless because we don't know what financial institution will next be revealed as fraudulent -- such as the bunch out of Texas that earlier this week was revealed to have stolen billions from investors.

So are these the last days of Pompeii? Is America soon to simply melt down? Hell, no! What we're now witnessing is a similar meltdown to that which the nation has experienced before in its history, and from which we will recover -- and without spending reckless heaps of good money to chase the bad.

Was some stimulus needed to get things started" Arguably yes. But we didn't need an omnibus entitlement bill that skirted the legitimate appropriations process. Nor was a second round of financial bailouts required; one that even the banks themselves say they didn't need. What wasn't called for was the nationalization of the financial and manufacturing sectors of our economy.

No, these are not the last days. But they are difficult ones, and they may be prolonged rather than abbreviated by the rash manner in which Congress helped turn the crisis into a panic.

Our latest polling has been practically alone in accounting for voters who identified themselves as Democrats as recent as January, but who now have drifted back into the "independent" category. These polls show that the biggest single victim of this mass paranoia may be President Obama. Our surveys show that he has lost 15 points or more in his approval rating in a matter of a month. No mean feat.

The truth is that this whole travesty has been an illness for which the anecdote has made the patient sicker. For the most part, the illness should have been left to run its course. Now Federal Reserve Chairman Ben Bernanke says that economic projections look healthier further along down the road -- just as they always do following recessions, no matter how lengthy.

Keep an eye on the 2010 congressional elections. They might just signal to President Obama that paranoia, when exploited, can trigger reverse consequences from those intended.