A Very "UnAmerican" Answer to Solving Our Financial Woes 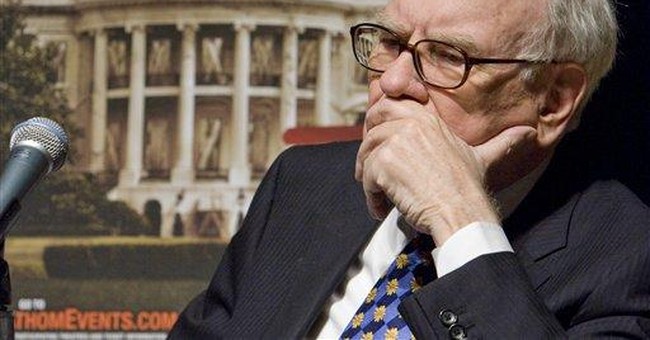 Of course we all know that under the proposal Obama supports, there is very little difference between a family that makes $300,000 a year or, say, Mr. Buffett and Mr. Gates. Warren Buffett has even stated that the rich pay less as a percentage of income than do their secretaries.

So Buffett and Gates want Americans who earn over $250,000 a year to send a higher portion of any excess amount they might earn to the federal government so it can determine which giant mismanaged conglomerate it can next bail out of trouble. And they want the government to decide how those dollars should be spent.

Of course they've already decided how their extra bucks should be expended. Bill Gates and his wife have a foundation in their names that admittedly does a great deal of good around the world -- to the tune of $38.7 billion. But they help decide where the funds go and get all the credit for the donations. Buffett must like the way they spend their charitable dollars because the Gates Foundation is the beneficiary of a large portion of Buffett's holdings as well.

That's all well and good. But I have a better idea.

Rather than arbitrarily declare someone "rich" when they cross that $250,000 level, let's raise the bar. Heck, let's even let an individual keep the first $1 billion he or she earns. After that, let's let them have a taste of what real taxes are all about.

How about a net worth tax? I know I've kidded about it before, but it's even more fun thinking about it under the current circumstances, both political and economic.

Let's tax the excess amount of anyone's net worth that exceeds $1 billion at 90 percent. Of course we would have to undo those charitable foundations where the super-wealthy have the ability to demand, say, accountability and successful results for the use of their generously given dollars. They would instead have to let the old wheel of fate known as the federal government spend those dollars. There would be no huge parties honoring them, no honorary doctorates for their donations, not so much as a thank you letter.

But think how happy folks like Gates and Buffett would feel. Gates alone would be "donating" $45.6 billion to the United States Treasury. And hey, we wouldn't need cash from Bill -- the government would be happy to just take possession of his excess assets.

As for Warren, the $54.9 billion he would owe could help cover Fannie, Freddie and so many other worthwhile causes. Of course no one would be meandering over to Omaha to hear his wisdom on making money, because he would be "just another billionaire," instead of the richest man in America.

Sound absurd? Of course. But it makes a strong point.

The two wealthiest individuals in America believe that if you strive to become wealthy, government should take more of your money and determine where and how it can be wasted. The problem is, there aren't enough "rich" $250,000-plus living on the edge, scared to death, stretched-to-the-max people in America to cover for the billions of dollars being printed and distributed before the ink dries. All of it to prop up rotten lending institutions and Wall Street crooks.

Don't worry, Obama supporters, there are plenty of McCain supporters who would qualify for my special little wealth tax. It's just that most of them aren't dumb enough to be proclaiming someone earning enough to support a family of four with a little spare change left behind as being "rich."

Oh, and one other thing. Oprah will really like this plan. The "O" loves to give things away. Based on reports of her net worth, she would be "donating" about $1.35 billion to the federal government.

Now wouldn't you love to see the smile she would be sporting on the next cover of her magazine after giving all of that away to her federal government? What, no grateful audience jumping for joy and throwing hugs and kisses her way? She might have to skip being on that cover. Perhaps there is value in my "tax the rich" plan after all.