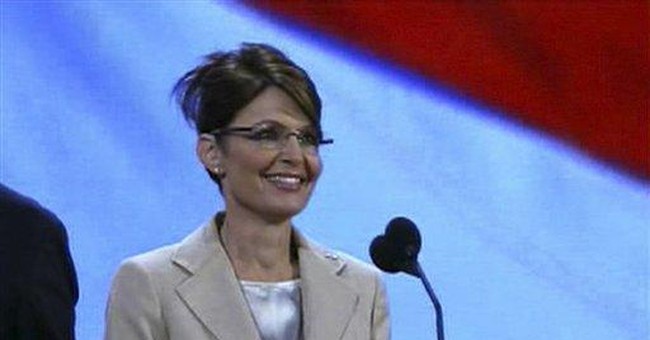 Those who say there's no media bias aren't saying anything right now. They're laying low.

First, my own minor mea culpa: A week ago, I wrote that Barack Obama had enjoyed little or no bump in the polls from the first nights of the Democratic National Convention. Then came a bump after all, thanks mainly to his high-flying acceptance speech and ringing endorsements from Bill and Hillary Clinton.

Now on to the latest epidemic of media bias.

Obama and David Axelrod, his chief strategist, together have probably triple the combined brain density of both their activist supporters and many among the pundit class. Know that Obama and Axelrod are privately furious over the endless attacks, snide comments and second-guessing about John McCain's choice of Alaska Gov. Sarah Palin as his vice-presidential running mate, and now about her unwed daughter's pregnancy.

Obama's team is smart enough to know this open faucet flow of condemnation and vitriol has sprouted sympathy -- and additional name ID -- for Palin among a significant bloc of undecided voters. The furor also has whacked the sleeping hornet's nest know as the Republican Party voting base, which until now had been moodily snoozing inside the hive.

Many of them recall Dan Quayle, who was mercilessly and unfairly pilloried by the same kind of media barkers when he was George H.W. Bush's running mate in 1988. Quayle was verbally drawn and quartered over a "controversy" about his onetime National Guard service during the Vietnam War. (Bush and Quayle won anyway.) Years later, it was only made worse when Quayle leveraged off an episode of the TV sitcom hit "Murphy Brown" to make a point about the ease with which American culture accepts single motherhood. (How ironic is that now?) He was condemned for having insulted all single-parent families, which was not what he said.

But there's a difference in Qualye's and Palin's situations, and it's a big one: Bush's handlers took the baton of condescension from media and Democrats and used it to effectively spank their own VP candidate as if he were a naughty kid. But McCain has circled the GOP wagon that holds the women and children, aka Palin and her daughter. He refuses to put her on a lease, as Bush did Quayle when things hit the fan.

Ironically, Dan Quayle was the opposite of the man he was portrayed to be during Bush 41's term. He was -- and is -- bright, articulate, funny and totally at ease with just about anybody who thrusts out a hand at him for the shaking.

But as soon as Quayle got stereotyped as a handsome bungler, Bush controlled his No. 2 as if he were the organ grinder and Quayle his monkey. Quayle progressively sank to the level of these low expectations after that.

Is Sarah Palin the latest reincarnation of sliced bread? Let's reserve judgment. At minimum, she's spruced up the nights of the living dead known as the 2008 GOP convention. And yet a feeling hangs in the air that a second shoe may be about to stomp on Palin and McCain. Maybe she wasn't sufficiently "vetted" after all.

But hold on. Did Barack Obama's team properly vet Democratic VP nominee Joe Biden? It seems that as soon as the Obama campaign strummed on their harp of righteousness a tune about McCain being tainted by association with lobbyists, they soon themselves became vulnerable to a similar charge. But media has given bare lip service to the cozy relationship between Sen. Biden and his son's governmental affairs firm.

The firm has as one of its name partners a William Oldaker. He served as general counsel for Ted Kennedy's 1980 presidential bid. Oldaker reportedly received funds from Biden for services, even as Oldaker was lobbying Congress on behalf of other clients.

But hey, these are just sophisticated people, right? No need to investigate. Instead, many -- not all -- in media are hellbent on beating the living daylights out of Sarah Palin for her every transgression, no matter how small, instead of giving credit to a woman who scrapped her way to the top of a state practically overrun with the same "lunch pail" demographic that media lights claim to respect so much.

Do I think Sarah Palin was a great choice? I have no idea. I don't know enough about her yet. Who can tell if she will give McCain an edge?

But this much I know: Barack Obama and his team are a heap smarter than the half-wits spending their time trying to dig up dirt on a woman who hunts moose and raises kids who misstep on the way to adulthood. Obama knows that this is just asking for trouble for the Democrats with an American public that is just "unsophisticated" enough not to be gulled by the sophisticates.

Throw in that McCain is standing by his woman, and what you have is anything but Dan Quayle, Part Two.