What If Most GOP Contenders Skipped Iowa And New Hampshire? 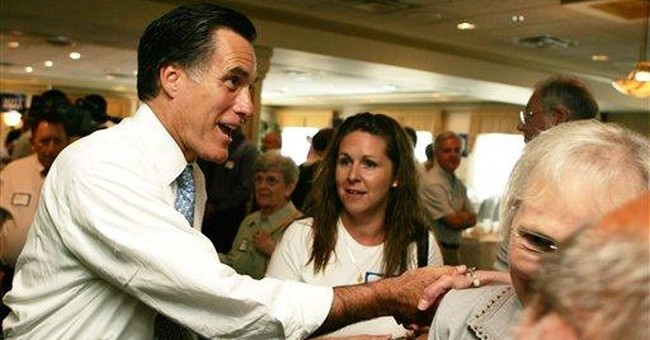 What if Iowa and New Hampshire both had parties, and nobody came?

With no offense to my friends in those two states, I'm compelled to report that some Republican presidential candidates are toying with the idea of skipping the historic first two contests in the race for the GOP nomination.

Former Massachusetts Gov. Mitt Romney has put to good use the early support -- especially money -- he's enjoyed from many among the Republican "old establishment," including plenty of longtime Bush supporters.

Romney has flooded Iowa with TV campaign commercials. He's also put together a strong organizational team on the ground there. Partly in recognition of this, top Romney rivals Rudy Giuliani and Sen. John McCain have now withdrawn from the nonbinding "straw poll" vote scheduled for later this summer in Ames, Iowa.

Both men's polling numbers have dropped in Iowa. Plus, the Bush White House has hired away Giuliani's top political coordinator in Iowa.

Then there's the matter of Fred Thompson. The latest polling in Iowa shows Romney leading, with Giuliani and Thompson tied for second place. Thompson's sudden spike in the polls has been meteoric, following his comparatively modest statement that he would establish a presidential exploratory committee, as they're called. He isn't officially a candidate yet, and he hasn't been actively campaigning in Iowa or New Hampshire.

The strategic wild card for all of these candidates is Florida's decision to move up its primary to January 29. In response, South Carolina likely will hold its primary earlier, too.

To candidates perhaps already boxed out by Romney's early money in Iowa and his name-ID advantage in New Hampshire -- his native region -- it's getting tempting to shift their intense focus to Florida and South Carolina.

Complicating matters, Florida, the state with the primary that will crown an early frontrunner just prior to the mega-state "Super Tuesday," has just made its already expensive primary campaign even more so.

On June 15, the Florida Legislature placed on the January 29 presidential primary ballot a high-stakes proposed state constitutional amendment that would radically alter the way homestead property taxes are assessed.

This likely will cause a jolt in voter turnout for the Republican presidential primary. That probably means that running an effective presidential primary campaign there will now be even more expensive than ever. Gary Reese explains the dynamics of the intriguing situation in Florida at www.southernpoliticalreport.com.

It's quickly becoming more and more apparent that an earlier-than-ever primary campaign season means earlier-than-ever efforts by serious candidates to adequately staff their campaigns, conduct polling and touch all the other bases required to have a shot at winning these critical states. Now it's become not just a question of strategy, but of resources to implement that strategy.

Some campaigns are quietly wondering whether it will be time and money well spent to trudge through Iowa and New Hampshire for months of speaking to small gatherings of caucus members or voters, when South Carolina and Florida may decide who is the viable candidate heading into Super Tuesday.

Some GOP campaign strategists noticed Romney's boast that he's winning Iowa and New Hampshire. They wonder whether they should concede those states to Romney and focus their own efforts on bigger states where they are more competitive.

Such radical chance-taking rarely happens. It looks too much like throwing in the towel. John McCain, for example, is slipping in the polls. He can only bow out of Iowa and New Hampshire if, say, frontrunner Giuliani does it first.

Giuliani and Thompson both may have compelling reasons to let Romney celebrate hollow victories in Iowa and New Hampshire. Witness the fact that Giuliani bagged the Iowa straw poll, and that he leads in the polls in both South Carolina and Florida. If one major candidate pulls out of the Iowa and New Hampshire contests, others might follow.

Thompson especially seems capable of anything. If his poll numbers keep rising at the rate they have in recent weeks, he alone might be able to give Romney a genuine fight in Iowa. On the other hand, TV actor Thompson knows his Drama 101. He might just be the alpha hound dog that leads the pack in staking out South Carolina and Florida with a big, "Welcome South, y'all."