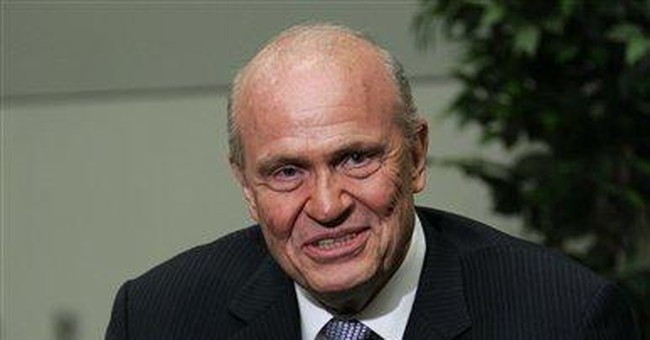 While former Tennessee Senator Fred Thompson has simply formed an exploratory campaign committee, the mere expectation that he will enter the field of GOP presidential candidates has vaulted him into second place in the polls focused on those Republican contenders.

A new InsiderAdvantage/Majority Opinion national survey is the first one taken after Thompson made his move toward a probable, eventual announcement that he's running. It showed Rudy Giuliani still leading at 28 percent, but Thompson had surged into second place with 19 percent, followed by John McCain and Mitt Romney with 17 percent each.

The poll surveyed 1000 likely voters in Republican primaries or caucuses across the nation. It was conducted May 31-June 1, just days after Thompson's exploratory committee was announced. The poll has been weighted for age, race, gender and geographic population distribution.

A week later, internal polling conducted for the organization that was involved in drafting Fred Thompson also showed him in second place.

Now the critical question is whether Fred Thompson can take the political capital he's already gained by simply saying he's ready to run, and turn it into an overtaking of Giuliani and the other contenders in a Republican slugfest.

The Thompson campaign is a textbook example of how political rumor can become political reality. Few candidates ever enjoy the opportunity of truly being "drafted" into a presidential campaign.

In April and May, many Republican insiders who consider themselves conservative, but not the wacky right, burned up telephone lines in search of an alternative to what many view as an uninspired group of candidates. When Thompson's name emerged, those close to him seized the moment.

Former U.S. Senator and Ambassador Mack Mattingly of Georgia was one of them. He was an early architect of the "draft Fred" movement.

For purposes of full disclosure, I served as Mattingly's first speechwriter, and he's served on the boards of several companies that I've either owned or for which I've sat as a board member alongside him.

The major value of this longtime relationship is not some inside information about Thompson, but instead a solid understanding of the kind of Republican who could be drawn to a Thompson campaign.

Early Thompson supporters like Mattingly are Reagan Republicans to the core. They don't talk about reducing the cost of government; they obsess about it. They're skeptical of the influence of special-interest groups, and of government intervention in our lives. These are not "neocons," but rather the last lions of the Reagan era. They're soft-spoken, but passionate.

Mattingly was elected U.S. senator from Georgia in 1980, in a brutal campaign against legendary Democrat Herman Talmadge. That same year, incumbent President Jimmy Carter fared poorly across the nation in his re-election bid, but did carry his home state of Georgia. On the same ballot, Mattingly won and became the first Republican senator from Georgia since Reconstruction.

Six years later, Mattingly was caught up in a national downdraft that sent many of his fellow freshman Republican senators home. But during his six years in Congress, Mattingly's affability and attractiveness helped him make friends among Republican leadership. President Reagan recognized him in one of his State of the Union addresses as the chief protagonist in one of the poignant dramas of the Reagan era -- the fight for the budget line-item veto.

Mattingly's name is closely associated with the likes of former Kansas Senator and GOP presidential nominee Bob Dole, and others of the same status and philosophical bent. Conservatives all; reactionaries none.

Mattingly refuses to categorize the Thompson movement as being the sole responsibility of any one group's effort. Instead, a look at early Thompson supporters shows a broad range of experienced Republicans that fully expect their candidate to talk plainly and display Reagan-like leadership traits.

For example, Reagan's response to terrorist dictator Moammar Qaddafi of Libya was not an invasion, but a surgical air strike that landed bombs so close to Qaddafi's home that he was hardly heard from again.

On the domestic front, the Mattingly-style Republicans have always advocated simplicity in the budget process, and in domestic policy in general. Neither the current immigration bill, nor a whole series of other legislative measures pushed by the Bush administration ever measured up to the Reaganites' simple and stringent political measuring stick. Put simply, it asks of every proposed policy, "Does it get the job done? Is it cost-effective? Can the public understand it?"

It remains to be seen whether Thompson can climb the ladder and become his party's nominee. But there is little doubt that this is the first bona fide "movement" in many decades to draft a Republican candidate for president.