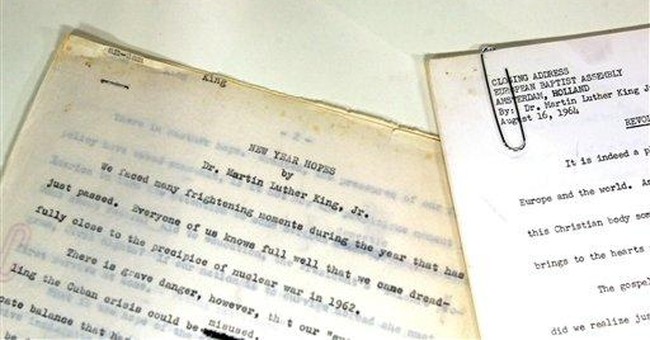 As I've written previously, it's been my good fortune to be a friend and former counselor to the family of Dr. Martin Luther King Jr.

I did not know his eldest daughter Yolanda, who died this week. I did know about her considerable achievements.

Weeks ago, I refrained from opining on the entire Don Imus issue. But the tragic death of a woman in her early 50s allows me the opportunity to make a broader statement about how one deals with issues of race and advancement for minorities in America.

I think Dr. King would be proud of the way his family has conducted themselves over the years. Rather than use the King name to get out in front of every controversial issue or presume themselves spokespersons for all American blacks, they've instead concentrated on carrying their father's message forward, while also developing their own careers based on their own talents.

Martin -- MLK III -- entered a life of politics and eventually led the government of the largest county in Georgia. He also was a leader for the Southern Christian Leadership Conference, following in his father's footsteps.

Some have criticized his political and administrative skills. So it goes for anyone who sticks out their neck in public service. The man has always been warm, gracious and unpretentious.

Dexter King ran the King Center in Atlanta, but grew weary of constant attack by, of all things, a local newspaper editorial board that prides itself for being the protector of the civil rights movement and "progressive" thought.

It was Dexter who helped steer his family through many efforts to sell their father's documents and memorabilia. Many critics say the King family has tried to profit from Dr. King's legacy. But if similar behavior is good enough for the wealthy family of John F. Kennedy, it's certainly good enough for a family left with very little when their father was murdered. Dexter is now pursuing an acting career in California.

Bernice King is a minister known for her phenomenal ability to communicate and inspire. Just like her father.

Then there was Yolanda, known as "Yoki" in her family. The nickname came from her father.

Yolanda chose not to follow in the footsteps of her father. From an early age she had wanted to be an actress. Friends say Dr. King wasn't pleased. Then again, he probably dismissed her ambition as youthful fancy.

And yet an actress she became. She died in California as she was preparing for a new play that was being produced by her company, in which she was to star.

What's essential here is that the King children didn't get fabulously rich through lucrative "consulting contracts," or legal "settlements" spun off of perceived or real racial controversies. They didn't try to become household names by falling over themselves to get to network or cable TV broadcast booths every time an issue came up that could have called for their opinions. Instead, they did as those who truly believe in Dr. Martin Luther King's dream do. They lived to work and accomplish the American dream of success based on their own talents and dedication.

Through her courage, entrepreneurship and talent, Yolanda King made a life and a name for herself. She stood up for what she believed, for example, when she refused to perform in a state that did not recognize her father's birthday as a national holiday. But she did not seek to build her fortune by being an opportunist.

Nor have any of Dr. King's children abused the privilege of their last name. They've all been humble and gracious, and often in situations where they could have taken advantage of circumstances, and perhaps been forgiven if they had.

Most admirable of all, they've declined to do as some others have: act as if the world must heed their every word and bend to their every demand because they themselves represent "racial justice." Such people often have one standard for the mistakes of others, and a different standard for themselves and their allies.

Thankfully, we have the example of Dr. King's children to set our lights by. Unfortunately, the family has lost the eldest child. May God bless and comfort his family, whose contributions to the world and life by example have been overshadowed by those who showboat and bully.