The Riddle of Rudy 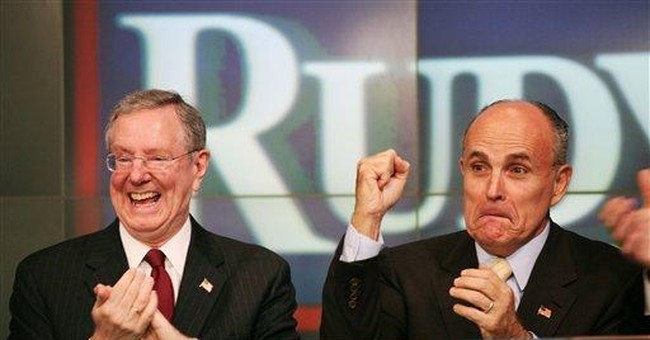 Two new InsiderAdvantage polls, one in Georgia and another soon to be released in another major Southern state, show former New York City Mayor Rudy Giuliani leading the pack of potential Republican presidential candidates. No real surprise there, as Giuliani leads in national polls, too.

But here is his big problem: While GOP voters say they like Rudy, he doesn't lead by a poll margin significant enough to be safely ahead. And among potential candidates, Giuliani enjoys perhaps the highest name recognition. In other words, how much higher can he go?

Equally vexing for the Giuliani camp is that he lacks experience, as well as foot soldiers among Republican activists. Some may recall the ruckus earlier this year over the alleged theft of Giuliani's campaign blueprints. Having read excerpts from what was purported to be this plan, I can tell you I don't think anything of value was lost. It read like a plan for a campaign for class president.

In state after state, top political consultants, elected officials and activists are signing up with either former Massachusetts Governor Mitt Romney -- viewed as the GOP's Old Guard candidate -- or, to a lesser extent, with Arizona Senator John McCain, the "maverick" candidate.

If the war is about electability, Giuliani seems outflanked. Romney somehow has morphed from a fairly liberal social-agenda politician into a seemingly acceptable pro-lifer for the GOP's more conservative crowd. McCain has been able to leverage the constant attention he gets from being in the Senate to successfully style himself as representative of maverick or populist positions, to Giuliani's detriment.

As for Giuliani's bright and innovative style, waiting in the wings is Newt Gingrich whose brilliance is obvious -- just ask him!

What about Rudy's star power? It could be blocked, as well, if former Tennessee Senator Fred "Star of the Silver and Small Screens" Thompson enters the race. He polled surprisingly well in several of our surveys, especially considering that his name as a potential candidate arose just a few weeks ago.

If GOP leaders are unable to keep Thompson out of the race by offering him the attorney general's job, should current AG Alberto Gonzales leave due to scandal, Thompson could be a powerful force in the White House sweepstakes.

So what's a man like Rudy Giuliani to do? Like Democrat Howard Dean four years ago, Giuliani leads in virtually every poll for his party's nomination for president. How to avoid Dean's crash-and-burn fate?

Simple: Make the race all about competence and terror. Remember, it was cleaning up bureaucratic, crime-ridden New York City that brought Giuliani to the forefront of America's political scene prior to 9/11.

But running a race on "competence" alone won't do the trick. Just ask Democrat Mike Dukakis, who tried that approach in 1988.

Instead, Giuliani somehow will have to find a way to separate in American consciousness the Iraq war from the wider war against terrorism. He would benefit from the perception that "another 9/11" is not just likely, but inevitable.

Perhaps the Giuliani camp should take a page out of Lyndon Johnson's 1964 presidential re-election effort. Johnson's campaign aired on TV a campaign ad -- the so-called "Daisy Ad" -- in which a child plucked petals from a flower as President Johnson's voice warned of the risk of nuclear war. His target was ultraconservative Republican opponent Barry Goldwater.

Giuliani's version would need to target those who have no experience combating or responding to actual terrorist plots.

The Daisy Ad only aired once. Those who remember it recall the image of a nuclear bomb exploding and the explosion reflecting in a close-up in the girl's eyes.

If that sounds like a bold strategy for Giuliani, it's meant to. That's what it'll take to leverage his strong name ID into broader and deeper active support -- and campaign donations.

In the end, Rudy Giuliani is an outsider running in what has been traditionally a GOP insider's world.

Giuliani never saw that coming. He remains "the New Yorker who had two women at the same time."

Mitt Romney is recruiting investment bankers from -- you guessed it -- New York as his political donor base.

And John McCain has the tough-talking law-enforcement types, often with military backgrounds, in his corner.

Rudy Giuliani has just one thing going for him right now. He's leading in the polls. It's up to him to stay there.