Too Many Unasked, Unanswered Questions About Anna Nicole Smith's Death 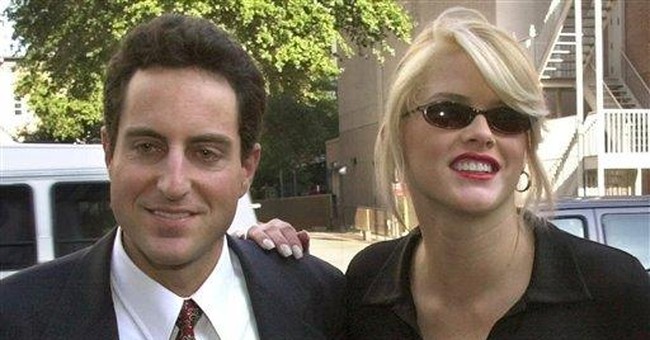 I know everyone's sick of hearing and reading about Anna Nicole Smith, the late celebrity without portfolio.

In broaching the subject, I mean no disrespect for the dead. It's the living who draw my interest.

By now most of us know about Howard K. Stern -- the middle initial "K" is to distinguish him from the radio shock-jock Howard Stern.

Howard K. Stern is the seemingly "quasi-" husband of Smith, one of a lengthening list of men claiming to have enjoyed intimate relations with Smith during what physicians say would had to have been a fairly short length of time -- the time in which she could have conceived the baby who was later born. If that list of possible suitors keeps growing, Smith's greatest accomplishment may be having the most potential "baby-daddies" in recent history.

But it's Stern who clearly stands out in the Anna Nicole Smith saga. Those who viewed the reality show that featured an often-incoherent Anna Nicole know it was Stern who played the dual roles of her counselor-at-law and concierge. I considered it a safe bet that he was being paid a fortune to spend even 10 minutes in the wacky world of this confused, pitiful young woman, much less time enough to run her life minute-by-minute.

Yet there he was, guiding her every move, often with Smith appearing to have no idea what she was doing or where she was going.

At this point in my evaluation, the trained attorney in me surfaces. I'd never want to damage a man who is grieving over the loss of a loved one. Still, in watching this media circus continue to unfold, I have some questions that even the likes of CNN's Nancy Grace have yet to fully and clearly pose.

-- How and why did Anna Nicole Smith and Stern end up taking up residency in the Bahamas prior to the birth of her child? Who made that decision? Anna Nicole? Did she understand that by moving there, she and her baby would be subject to a whole new set of laws? Laws that would be more beneficial to someone who was her civil spouse than to her or someone who had her power of attorney?

-- What are the chances that drugs, most of all prescription drugs, could have been obtained for a woman obviously already whacked out? Who prescribed the drugs? To whose name were they prescribed?

-- How is it that Smith's only living heir prior to the birth of her daughter, her son, could have been addicted to drugs with no one doing anything about it? How did he get access to methadone, which apparently can be fatal when combined with certain prescription drugs?

-- Was Smith also using methadone? There are reports that methadone was found in the refrigerator of her home in the Bahamas immediately after her death in Florida. If that's true, why would such a dangerous drug -- one that might have killed her son -- still be around long after his death?

-- While in Florida, Smith reportedly had a dangerously high fever of 105 degrees. With a nurse at her side, why was a physician not summoned; why no call made to 911? Any nurse knows that such a high fever is something that should be called to the attention of a physician to determine its cause.

-- Where was Stern when Smith died? We've heard many versions of the story, but what needs to be known is who was where, and why, during the entire bizarre stay at the Florida hotel.

-- Finally, how could someone suffering the grief Stern is going through negotiate a deal with a television program for exclusive interviews and photos? And at what price?

The above isn't so much a conspiracy theory as it is plain old disgust. Stern is no dummy. He knows law and Hollywood -- and money.

The only thing he didn't seem to know was how to take care of the woman he so tearfully claims to have loved.