Obama Doubles Down Against History 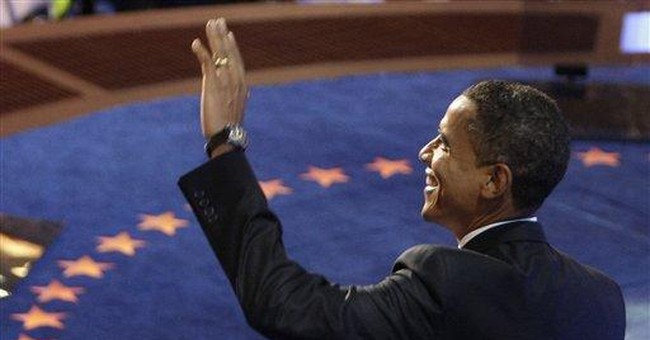 By nature, most politicians are risk-takers. One cannot enter the political arena without being willing to risk his name, family privacy, and, sometimes, fortune on the winds of political lady luck. As with most gamblers, however, most politicians fail to recognize the warning signs and either hold ‘em or fold ‘em. Senator Barack Obama’s selection of Senator Joe Biden as his vice presidential candidate is the latest example.

Because Vice President Dick Cheney decided not to run for the presidency, the 2008 race is the first “open” election since the 1952 election when General Dwight D. Eisenhower defeated Illinois Governor Adlai Stevenson. Both candidates came from outside the Beltway. In 1956, they faced each other again and the outcome remained the same.

So, the 2008 race gives American voters their least preferred candidates: two inside the Beltway candidates who are sitting U.S. senators. As a result of this rarity, the selection of vice presidential candidates, while typically negligible on the outcome of the election, becomes potentially game changing. Each candidate has the chance to address history’s lessons by selecting an outside the Beltway vice presidential candidate.

John McCain has spent 26 years as a politician. Before politics, he spent 27 years as a member of the military, which included five and a half years spent as a Prisoner of War in Vietnam. While the democrats will try to portray McCain as a Washington insider, most voters across the United States see McCain as a maverick who has fought the ways of Washington. Given the nastiness of the 2000 primary with President Bush, it will be hard for democrats to stick McCain with the “Friend of Bush” tag. According to the National Journal, McCain has a middle of the road voting record.

The problem is the Electoral College and a little more history.

It is a safe assumption that both candidates will hold the states that their party won by 5% or more in 2000 and 2004, except possibly Colorado, Virginia, and Missouri (more on those three states later). With those status quo holds, McCain would lead Obama with 216 to 183 electoral votes. There is little evidence that any of those states will break with recent history.

As for Minnesota, non-Democratic-Farmer-Labor Party candidates don’t win major statewide office unless a strong third party challenger is in the race (Jesse Ventura won with 37% in 1998; Tim Pawlenty won with 44% in 2002; Pawlenty barely won reelection with 47% (by less than 1%) in 2006) or democrats politicize a funeral (the Paul Wellstone election where Norm Coleman won by 2% over last minute replacement former Vice President Mondale), which isn’t the case in the 2008 election. With those states, Obama would lead McCain with 248 to 216 electoral votes.

That leaves the five toss-up states of Iowa, Nevada, New Hampshire, New Mexico, and Ohio, as well as the three exception states from above. Those eight states are worth 74 electoral votes. Of those states, given the sheer enthusiasm for and primary turnout differential between the parties, it seems like a safe bet that Obama will win Iowa and New Hampshire, which would give him 259 electoral votes – only 11 shy of the presidency.

This is where the Biden selection negatively impacts Senator Obama’s chances to get those remaining 11 electoral votes.

In 2004, President Bush comfortably won Virginia (8% win). While the state seems to be trending democrat given recent statewide races, a democrat presidential candidate hasn’t won Virginia since President Johnson’s landslide in 1964. Two sitting U.S. senators from Illinois and Delaware with extremely liberal records aren’t going to convince the voters outside of Northern Virginia to vote for them. Given McCain’s military credentials and Virginia’s strong presence of military men and women, McCain should carry Virginia, which would give him 229 electoral votes.

In Missouri, President Bush won it in 2004 by over 7% of the vote. Even giving credit for the enormous turnout difference in the primary (820,453 democrat voters to 584,618 republican voters), overcoming a 7% defeat just four years earlier seems to be an unlikely event. With the liberal voting records of Senators Obama and Biden, their total lack of private sector experience, and their inside the Beltway ticket, McCain and his moderate voting record should have the edge, thereby giving him 240 electoral votes.

In Colorado, President Bush saw his roughly 9% margin of victory in 2000 get cut in half in 2004. With the substantial statewide and state house and senate wins over the last four cycles for democrats and the continued influx of liberals from California, Obama is likely to make Colorado an even closer election in 2008. The problem is that Obama’s strong draw in urban centers and college towns gain him little in Colorado as Denver and Boulder traditionally heavily favor democrats already.

As was shown in the 2002 United States Senate race and 2004 presidential election, so long as the margins of victory in Douglas County and Colorado Springs negate the margins of defeat in Denver and Boulder, it is mathematically hard for a democrat to win the rest of the state given the rural communities in the rest of Colorado. Biden didn’t add any element to the ticket to put these communities in play. With the large military presence in Colorado, McCain will keep its 9 electoral votes, leaving him with 249 electoral votes.

President Bush won both Nevada and New Mexico in 2004. Without Governor Bill Richardson on the Obama ticket, McCain, as the popular senator from the neighboring state, would seem to carry the advantage. Add in McCain’s appeal to Hispanic voters due to his attempts to provide illegal immigrants a pathway to citizenship and his chances of winning those states is even stronger. As with Colorado, east coast Biden fails to change the dynamics in these states, too. Assuming McCain holds those states for the republicans, he would have 259 electoral votes.

That leaves just Ohio with both candidates needing it to win the presidency.

Hillary Clinton destroyed Obama in the Ohio primary. He won four urban counties (Cuyahoga; Franklin; Hamilton; and Montgomery) and one college town county (Athens). Obama received less than 40% of the primary vote in 62 out of 88 counties starting in the northeastern corner of Ohio, swinging down through the Appalachian counties, and then driving north into the traditional republican counties. It is an understatement to say that a ticket with two liberal U.S. senators from Illinois and Delaware with over 49 years spent as politicians mostly inside the Beltway will be able to reverse the views of those Ohioans who didn’t buy what Obama was selling just eight months earlier.

Unless McCain also fails to heed history’s lessons, he will hold Ohio and the presidency for Republicans with a 279 to 259 electoral vote victory. Specifically, McCain must select an outsider as his running mate. It frankly doesn’t matter who that outsider is as much as it matters that he or she is not a Washington insider. McCain’s choice won’t win any more states for him, but he could neutralize the advantage he has over the Obama-Biden ticket if he selects a Washington insider. Such a slip likely would put Colorado, Missouri, Nevada, and New Mexico and their 30 electoral votes in play, which are enough electoral votes to lose the presidency.

Most Americans view Washington insiders with a healthy dose of skepticism. In presidential elections, outsiders almost always beat insiders and ultimate insiders (the U.S. Senate is considered the most exclusive club in America) almost always lose to anyone else. In the 2008 presidential election, Americans will choose between two tickets. The democrat ticket consists of two liberal U.S. Senators from two liberal states. The republican ticket so far consists of one moderate U.S. Senator from a moderate state and one unknown.

Senator Obama doubled down against history by selecting Senator Biden as his running mate. My bet is that McCain will ask lady luck to blow on his dice and put his wager on an outsider for his running mate. With the Electoral College advantage he currently possesses, as a student of history and military strategy, McCain knows when to hold ‘em. Why gamble with history?