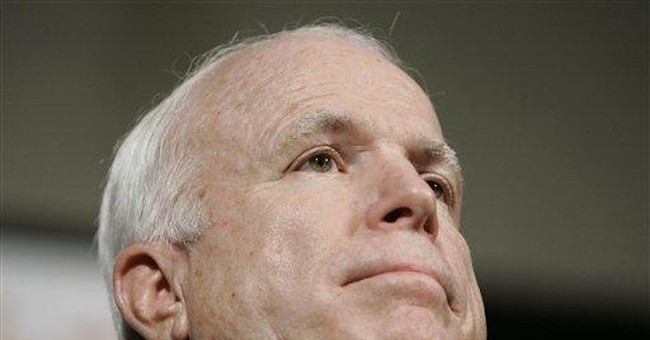 Sen. John McCain’s campaign for president has had a tough go of it in recent weeks. A poor first quarter fundraising performance, sagging poll numbers (an L.A. Times poll showed that McCain had slid to 12% nationally), and a press corps that has turned on him because of his support of the war in Iraq.

So how did the McCain’s campaign power through two horrible weeks of news without imploding? Their method, based on public accounts and my own discussions with key McCain operatives and consultants, could serve as a “How To” guide for other campaigns, which will inevitably face bad weeks themselves as the campaign continues. Here are my thoughts on the lessons learned:

Despite what baseball aficionados (who watch every game – even in March) may think, it really doesn’t matter who is on top in March; what matters is where you are in the standings when the season ends. Politics is similar. Every campaign – even the good ones – have their ups and downs (remember the time George W. Bush couldn’t name several world leaders – and let’s not forget that he lost New Hampshire to John McCain, as well (talk about a bad week) …

Seasoned teams know this, and that keeps them from panicking when they hit a losing streak. Led by Brian Jones, the McCain communications team kept a level-head -- even when things were looking especially bad. They still have a long way to go, but when other campaigns might have collapsed – or made fatal gaffes – they stayed calm.

And in today’s modern media world, acceptance often means public acknowledgement. In this regard, McCain has been quick to admit mistakes. For example, when he misspoke about “unarmed humvees” in Iraq, he didn’t gloss over the mistake; he admitted that he misspoke on 60 Minutes.

In this political environment -- where President Bush has been criticized for rarely admitting mistakes -- some voters may find McCain’s candor especially refreshing.

The McCain campaign didn’t merely acknowledge his campaign failed to meet fundraising expectations – they made the risky decision to announce a very public re-launch of its operations (this move was risky because it allowed his critics to speculate that the “wheels were coming off.”)

In this case, McCain has chosen to go to the bullpen and bring in a couple of seasoned “aces”: Sen. Phil Gramm of Texas and former congressman Tom Loeffler.

While McCain is a Navy man, in this case, he is following the motto of the Marines: “Adapt and overcome.”

While the mainstream media has largely abandoned McCain, conservative bloggers, such as Rich Lowry and Jonah Goldberg, have stepped up to defend him. Additionally, blogs like Powerline and Captain’s Quarters have posted favorable things these last two weeks. Arguably, these voices are more important in a Republican Primary, anyway. (Thought: I’ve long suspected that McCain’s popularity with the establishment media hurt him with conservatives. Could it be that the media’s abandoning McCain is helping him with conservative bloggers?) By reaching out to conservative bloggers, McCain was able to have, at least, some positive news coming out during the two bad weeks.

It remains to be seen whether or not McCain has completely turned the corner (in a recent CNN poll, McCain showed significant gains, but these numbers assume Fred Thompson and/or Newt Gingrich were in the race), but one thing is for sure: He has survived two tough weeks – and lived to fight another day.

In the immortal words of Crash Davis (from the movie Bull Durham):

(That’s a baseball proverb, by the way.)