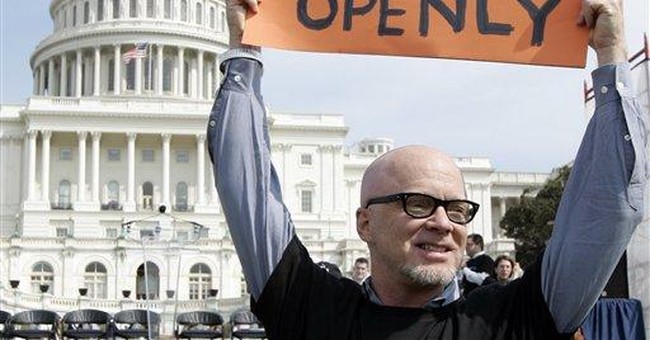 The U.S. military has always discriminated. There are a host of malignant behaviors such as illicit drug use or habitual criminality that can render a person ineligible to serve. As my father-in-law learned, there are also benign maladies such as vision impairment or flat feet that can bar an otherwise eligible applicant. Any number of behaviors or conditions with varying degrees of severity can dash one's hope of donning the uniform.

This is discrimination only insofar as "discriminating minds" with expertise in these matters have found that such restrictions are necessary to maintain excellence in our historically unparalleled fighting force.

In formal recognition of the long-established finding that "homosexuality is incompatible with military service," federal law – Section 654, Title 10 – objectively prescribes the following:

Indeed, federal courts have ruled over and again that a prohibition against homosexual conduct within the ranks of the military is both constitutional and justified.

The answer to both is no.

The fact that "homosexual acts would create an unacceptable risk to the high standards of morale, good order and discipline" has not changed. Proponents of military homosexualization offer scant evidence to the contrary. In truth, the only thing that has changed is politics.

Reasons for incompatibility are manifold. They are firmly rooted in both common sense and in the "settled" anthropological, sociopolitical and medical sciences, as well as the theological arena. Taken alone, each provides ample justification for maintaining the status quo. Combined, they prove the case. For now – in the interest of brevity – we'll focus on but one: medical science.

Consider that current U.S. health regulations prohibit men who have sex with men (MSM – aka "gays") from donating blood. Studies conducted by the Centers for Disease Control and Prevention and the Food and Drug Administration categorically confirm that if MSM were permitted to give blood, the general population would be placed at risk.

The FDA further warns: "['Gay' men] also have an increased risk of having other infections that can be transmitted to others by blood transfusion. For example, infection with the Hepatitis B virus is about 5-6 times more common, and Hepatitis C virus infections are about 2 times more common in ['gay' men] than in the general population."

A 2007 CDC study further rocked the homosexual activist community, finding that, although "gay" men comprise only 1-to-2 percent of the population, they account for an epidemic 64 percent of all syphilis cases.

Do the math: If "gays" are allowed to serve openly – as to appease leftists' euphemistic demands for "tolerance" and "diversity" – how much more would soldiers in the field – where battlefield blood transfusions and frequent exposure to biohazards are commonplace – face pointless peril?

All things considered (and we've only scratched the surface), is it any wonder that, according to a 2008 Military Times survey, almost 10 percent of currently enlisted personnel say that should "gays" be allowed to serve openly: "I would not re-enlist or extend my service." Furthermore, 14 percent warn: "I would consider not re-enlisting or extending my service." The potential exodus of up to 14 percent of military personnel from our all-volunteer services would be devastating.

When we apply these uncompromising medical and administrative realities to the "gays in the military" debate, we find that, objectively, and based solely upon medical science and the imperative to maintain good order and unit cohesion, homosexual behavior and military service remain today as oil and water.

Yet, inexplicably we see reckless movement from this administration, liberals in Congress and even a handful of high-ranking military commanders toward military homosexualization. This type of San Francisco-style social experimentation within the ranks of the armed services would demonstrably weaken, not strengthen, our military, jeopardizing national security.

In a purely civilian world perhaps we can afford to grant liberal social engineers a manageable level of latitude to play fast and loose with wistful "gay rights" rhetoric. However, it's an entirely different proposition when bad behaviors place others – particularly those who've already waged life and limb for country – at both an unnecessary and avoidable level of risk.

For these reasons (and many more) allowing practitioners of the homosexual lifestyle to serve openly in our armed services should not and must not be "tolerated."

Mr. President, it's your sworn duty to place national security above misguided ideology and extreme special interests. It's high time you begin to take your job seriously.