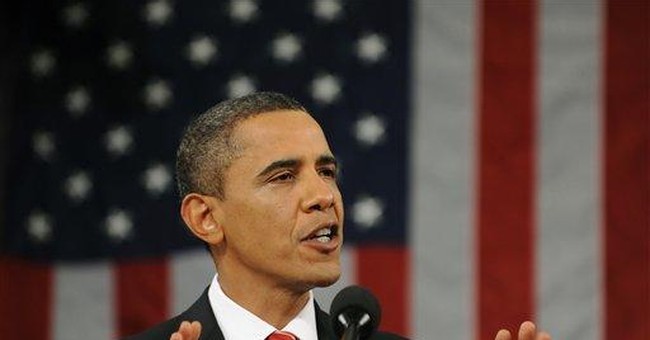 The president recently told Diane Sawyer: “I’d rather be a really good one-term president than a mediocre two-term president.” Excise the self-aggrandizing “really good” twaddle and it would seem ol’ Windy City Barry’s well on his way.

In the wake of Democrats’ historic Massachusetts smack-down, I’ve been anxious to see whether Obama would dig in his jackbooted heels and forge ahead with his wildly unpopular socialist agenda, or if he’d play nice with others and tack center (à la Bill Clinton in ‘94).

Wednesday night, during his first State of the Union address, we got our answer.

I’ll leave the in-depth analysis to others, but here’s the recap: Obama was Charlie Gibson and America was Sarah Palin. He looked down his nose, through the teleprompter, at the American people and in the most “me-centric” way imaginable, said: “Electric trains are wicked-cool. America sucks. Capitalism sucks. The Supreme Court sucks. It’s Bush’s fault. Oh, yea – the jobs thing. I’ll start my spending-freeze diet tomorrow. Give Perez Hilton a machine gun. Bama knows best. I’ll never quit. It’s Bush’s fault. Hopey-changey. Peace-out.”

I have mixed feelings. The not-ready-for-prime-time amalgamation of jaw-dropping hubris and chuckle-out-loud incompetence this man continues to display bodes well for conservatives. The creepy political suicide pact he, Pelosi and Reid have apparently entered into – if fulfilled – almost certainly ensures an electoral bloodbath in 2010. It could cripple the Democratic Party for decades to come.

On the down side, if Obama and his fellow “progressive” extremists in Congress actually implement any of these radical policy initiatives, it could cripple the entire country for decades to come. If Obama loses, Democrats lose. If Obama wins, we all lose. Either way, Dems are in a pickle.

While recently trying to reassure his very anxious colleagues that all’s well in O’Ba-La-Land, the president advised Democrats that the difference between 1994 and 2010 is that, now, “you’ve got me.” On Wednesday night he reminded them that, despite America’s wholesale rejection of ObamaCare specifically, and his larger socialist agenda generally, Democrats “still have the largest majority in decades.” He defiantly admonished: “Don’t run for the Hills,” concluding, “I have never been more hopeful.”

In 1994, after Bill Clinton over-optimistically interpreted his uninspiring presidential victory as a carte blanche mandate to “remake” America into Europe, voters responded by sweeping Republicans into leadership for the first time in 40 years.

Now – as revealed Wednesday night – we learn that, this time around, Obama has over-narcissistically interpreted his uninspiring presidential victory as a carte blanche mandate to “remake” America into Europe.

To borrow from Yogi Berra: It’s déjà vu all over again.

Notes, Elaine Donnelly with the Center for Military Readiness: “Dan Balz in a November 14, 1994, Washington Post article titled ‘Health Plan Was Albatross for Democrats: Big Government Label Hurt Party, Poll Finds. Greenburg found that 54% of 1,250 voters surveyed named the Health Care Task Force issue [HillaryCare] as the number one reason they cast a ‘vote of dissatisfaction’ in the leadership of Clinton and the Democrats controlling Congress in 1993.

“Greenberg also identified a second issue, called ‘cultural liberalism,’ which was cited by 51% of respondents and symbolized by Bill Clinton’s failed 1993 campaign for homosexuals in the military.”

So, in 1994, voters took Clinton and Democrats to the woodshed for 1) trying to “Mark McGwire” the federal government through imposition of socialized healthcare, and 2) for pushing hard-left social policies to include misusing and abusing the military as a petri dish for San Francisco-style social experimentation.

As Einstein (or was it Ben Franklin?) observed: “Insanity is doing the same thing over and over again and expecting different results.” So, is our president insane, daft, an obstinate left-wing ideologue or all three? You be the judge.

One thing’s for certain: Wednesday night kicked-off the 2010 campaign season. Wonder how many Democrats will – as did Deeds, Corzine and Coakley – ring the Oval Office for help.

Kind of like having Jack Kevorkian lend a hand with your medication, I suppose.

Matt Barber is an attorney concentrating in constitutional law. He is author of the book “The Right Hook – From the Ring to the Culture War” and serves as Director of Cultural Affairs with Liberty Counsel. Send comments to Matt at jmattbarber@comcast.net. (This information is provided for identification purposes only.)