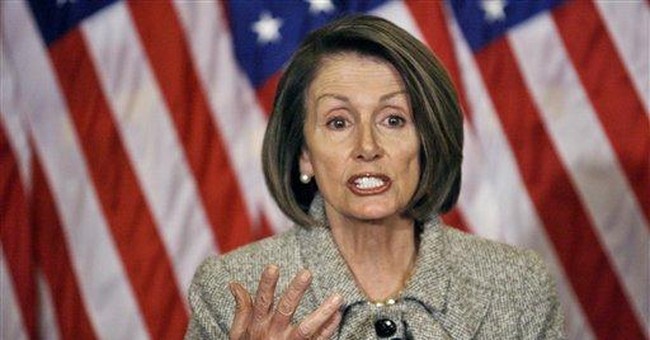 So much for that whole “hopey-changey” thing; cute while it lasted, but the American people – like Bernie Madoff investors – now realize they’ve been duped. “Change” for the mere sake of change is simply chump change.

The seismic political shift that occurred in Massachusetts Tuesday night can’t be overstated. Obama’s Marxist, secular-humanist agenda – shared by Pelosi, Reid and the rest of the elitist, Eurocentric left – just ain’t gonna fly in the good ole’ USA. Not even in liberal Massachusetts. (I’m a right-wing “redneck,” you say? Well, tough tea party!)

The delicious irony is that this senate contest between Republican victor Scott Brown and Democrat Martha Coakley was for the late Ted Kennedy’s seat (“the people’s seat”). Old Teddy’s baby, of course, was socialized medicine, and Brown’s election may well force both Teddy’s and Obama’s signature issue off the duo’s Faux-topian “bridge to nowhere.” (Let’s call it “Mary Jo’s revenge.”)

Those of us who prayed for a miracle to derail this ObamaCare monstrosity – passage of which seemed a foregone conclusion just weeks ago – have witnessed, along with the rest of the world, perhaps the greatest political upset in American history. It’s just that: a miracle. (God really does have a sense of humor, doesn’t he?)

Now, to Scott Brown: Many social conservatives (of which I’m one) have complained that the senator-elect is woefully flawed on social issues – particularly abortion. This is true.

Still, to my pro-life, pro-family compatriots, I offer this: While bleeding to death, one may be left no choice but to apply a tourniquet. A tourniquet is less than ideal. It may even cost a limb; however, it’s also likely to save one’s life. Obama has sliced open America’s wrists with his cutting political agenda. Time is of the essence. By providing Senate Republicans the crucial 41st vote needed to filibuster, Scott Brown supplies the tourniquet.

Consequently, ObamaCare may well wither on the vine. From a practical standpoint, countless innocents may be spared. How? We know that Obama’s preferred Senate plan would require taxpayer funding for abortion on demand.

This means that millions of Americans – in violation of their conscience – would, through force of law, be made complicit in serial prenatal homicide. Therefore, it’s no stretch, in my opinion, to conclude that Brown’s election – should ObamaCare go down as expected – may have saved untold thousands, if not millions, of lives.

Of course, none of this justifies Brown’s indefensible position on abortion, “civil unions” and other social issues. I and others will not rest until he, and all who have been so deceived by the euphemistic language of “choice” and “reproductive freedom,” likewise recognize that all persons – whether born or pre-born – share an “inalienable right to life” that in every instance trumps another’s phantom “right to choose” premeditated murder.

I also remind Michael Steele and the Republican minority that Brown’s election was not as much an endorsement of him or his positions on the issues, as it was a furious and unequivocal repudiation of President Obama, Nancy Pelosi, Harry Reid and their positions.

Just look at the grassroots, conservative groundswell (tea parties and such) driving this “throw the bums out” rejection of the Democratic juggernaut. The movement is led by complete conservatives, not mealy-mouthed “moderates.”

The GOP, if it wishes to both gain and retain political relevance and leadership, must back candidates who are solidly conservative on fiscal, national defense and social issues. They must stand firm upon the conservative Republican Party Platform.

Still, we mustn’t ignore the enormity of Scott Brown’s victory. He’s to be congratulated for running a great campaign and for giving voice to the revolutionary mood of “We the People.” Massachusetts Democrats, Independents and Republicans alike – and the American majority by proxy – are, once again (remember November’s GOP sweep in NJ and VA) rejecting Obama’s radical leftist agenda generally and the government takeover of healthcare specifically.

Consider that, according to Rasmussen exit polling, 56 percent of Massachusetts voters said that healthcare was their number one issue, more than twice the number two issue: the economy. Furthermore, 73 percent of Independents, the majority of whom voted for Obama in ’08, turned on the president this time around, casting a vote for Brown and, by extension, against ObamaCare.

So, despite the desperate rationalizations of Obama sycophants in the mainstream media and elsewhere, “We the People” have finally – by any reasonable standard – driven a stake through the heart of ObamaCare.

Of course, liberals are anything but reasonable. They remain determined “to do that voodoo that they do.” Yes, Democratic leadership appears undaunted, evidently intending to sprinkle pixie dust on their pet healthcare zombie in hopes that it may yet claw its way back from the grave (sorry for the mixed metaphor).

Rather than slowing down, regrouping and listening to the American people, Democrats defiantly insist that they will instead hit the accelerator, rushing the ObamaCare freight train yet more rapidly toward the cliff’s edge.

“Organizing for America,” one of Obama’s primary propaganda vehicles released a statement on Wednesday, incredibly suggesting that Brown won because Democrats haven’t pushed hard enough: “Yesterday’s disappointing election results show deep discontent with the pace of change,” claimed the release. “I know the OFA community and the President share that frustration.

“Our health care system still needs reform,” it continued. “The President isn't walking away from these challenges. In fact, his determination and resolve are only stronger.”

According to Reuters, Nancy Pelosi said on Wednesday that “Democrats will push ahead with a sweeping healthcare overhaul despite a Republican win…” And The Hill reports that, “David Axelrod, a White House senior advisor, said it’s ‘not an option’ for President Barack Obama and Democrats in Congress to abandon healthcare reform after roughly a year of formal efforts to craft and pass legislation.”

So, it would seem that, despite Tuesday’s crushing blow in Massachusetts, both the Obama administration and congressional leadership – in dogged defiance of America’s expressed will – have, nonetheless, made a political suicide pact. It’s Socialism or bust.

You have to wonder if Blue Dogs and other low ranking Democrats will take the Obamatown Kool Aid along with them.

If they value their jobs – and I think they do – I suspect not.

Matt Barber is an attorney concentrating in constitutional law. He is author of the book “The Right Hook – From the Ring to the Culture War” and serves as Director of Cultural Affairs with Liberty Counsel. Send comments to Matt at jmattbarber@comcast.net. (This information is provided for identification purposes only.)