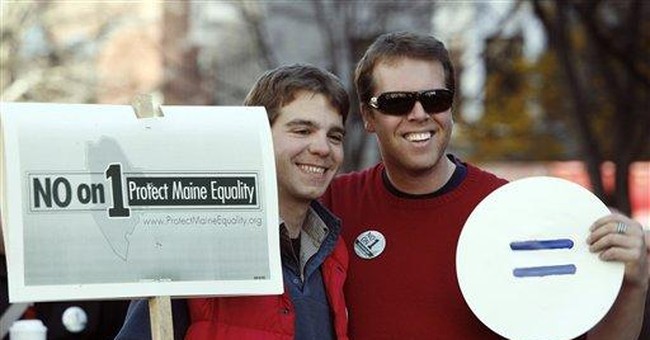 It never ceases to amaze me the degree to which liberals – the self-styled proponents of “tolerance” and “diversity”… the mind-numbingly sanctimonious arbiters of “hate” – consistently prove to be the most intolerant and hateful among us. But regrettably, since the recent passage of “Question 1” – the voter initiative that threw out counterfeit “gay marriage” in Maine – the level of hate-filled bile we’ve come to expect from the left has morphed from malicious to menacing.

In the wake of the horrific act of Islamic domestic terrorism at Fort Hood Texas, it’s been learned that militant homosexual activists recently made similar online postings to those of Nidal Malik Hasan, threatening additional acts of terrorism against Christians.

Shortly after “Question 1” was voted into law, I issued a press release (posted with additional commentary at AmericansForTruth.com) hailing this pro-family victory. In reaction to that statement a handful of homosexual activists on the popular anti-Christian “JoeMyGod” weblog, became completely unhinged, engaging in death threats and warning of future homosexualist terrorism should their political demands not be met.

Blog poster “ColdCountry” wrote: “Will someone please give me a gun?” Poster “Fritz” warned: “What I fear is that once gay and lesbian people give up hope of achieving equality through nonviolent means, there will be radicals who will begin to hunt down haters… All it will take is a small group of radical zealots who are willing to kill for their cause.”

In reply to Fritz, “tex” posted: “Fritz....you say this like it's a bad thing? Maybe a bit of well organized terrorism is just what we need.”

“This happens in all cases where people are oppressed and lack representation,” continued Fritz. “We will have gay and lesbian people strapping bombs to their chests and blowing up churches. All it will take is one or two more losses like this. If marriage equality is taken away in one of the landmark states, we will see domestic terrorism arise very quickly. … In 1991, I witnessed gay and lesbian activists setting fire to buildings and beating people with baseball bats in Los Angeles.”

“tex” reiterated: “Still not seeing this as a bad thing Fritz ... [African gay activists] didn't gain their civil rights through being passive.”

Liberty Counsel notified the FBI which is investigating the matter. Not surprisingly, Joe Jervis, the homosexual activist who runs the offending blog, quickly removed the comments once exposed (captured version of post available at AmericansForTruth.com).

Meanwhile, Michael Heath, former director of the Christian Civic League of Maine, was directly targeted with a death threat shortly after the vote on 1. An anonymous caller telephoned the League and left a message warning: “I am calling about Mr. Mike Heath, the Executive of your Christian Civic League of Maine.  He thinks that gay people should have our rights revoked that we already have. Well I can tell him this – I’m a gay guy who owns guns, and he’s my next target.”

Another death threat was made against Marc Mutty, chief of the unaffiliated “Yes On One” organization: “You're dead. Maybe not today, maybe not tomorrow, but soon...you're dead.” Law enforcement has been notified of each incident as left-wing extremist threats targeting other Christian advocates continue to mount.

Elected officials are apparently fair game as well. For instance, a post on the Gay.com weblog in December even went so far as to directly threaten the life of then President Bush (no news on whether the Secret Service investigated the incident). Someone identified as “Josh Sebring” wrote: “I suggest we throw a pride parade at the whitehouse and everyone bring their (sic) guns. We form a militia and get our gay rights by raiding the whitehouse and possibly burning it down or something. … We've got to shoot out a few Govenors (sic) knee caps, kill a few cops, burn down a few churches. We could get it done this year.”

As a former law enforcement officer, I can tell you that this is deadly serious business. All potential threats of terrorism and murder, when discovered, must be investigated. As Fort Hood has taught us, there are indeed ideologically driven terrorists who walk among us.

After passage of Proposition 8 in California we saw that many homosexual activists are capable of threats, vandalism and even violence. Those who either threaten or attempt to incite terrorism must be immediately brought to justice. Churches and Christian leaders around the country need to be on high alert. These threats of homosexual activist terrorism must be taken very seriously.

Of course, just as most mainstream media have sheepishly caved to the dictates of political correctness in refusing to call Muslim terrorist, Nidal Malik Hasan, a “Muslim terrorist” – they too have blacked-out the story surrounding these homosexualist threats of terror.

It doesn’t fit the PC narrative, you see. Islam is really a “peaceful religion,” right? And homosexual activists?  Well, they’re the victims, not the victimizers. They’re the targets of “hate crimes” not the architects.

It seems the mainstream media are likewise bent on strapping a suicide bomb to any last remnant of journalistic credibility.