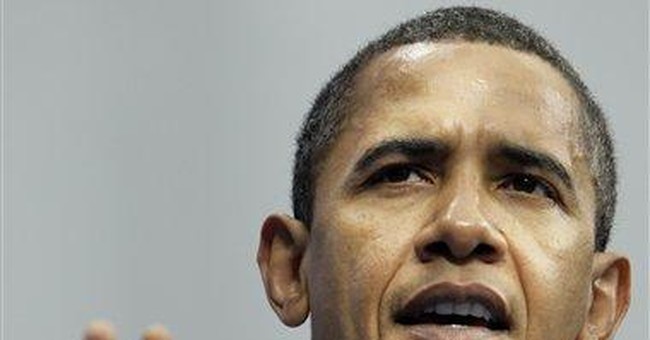 Relativism is as relativism does and Barack Obama does it well. His less than tepid response to evidence of a rigged election in Iran a few weeks ago and the subsequent brutalization of the Iranian people by an Islamofascist regime says more about our President’s worldview than it does his foreign policy.

Amid Tehran’s bloody election protests the internet was awash with images of Iranian citizens – many beaten, even murdered – desperately reaching out to Uncle Sam for cover. “Obama, please help us, they are killing our young children,” implored one protester’s sign.

Obama’s response? He launched the most vapidly uninspired course of inaction since the days of one-term Jimmy: “It's not productive, given the history of U.S.-Iranian relations, to be seen as meddling,” he lectured.

Critics pounced, calling the President’s hyper-measured reaction “timid” and “passive.” So he stepped it up a notch. This time he expressed “deep concerns about the elections,” promising to “monitor the situation.” Nonetheless he urged calm saying that he was “waiting to see how it plays out.” (Just what Granny needs while she’s being mugged: A would-be champion to “monitor the situation” and “see how it plays out.”)

Of course an abundance of “concern,” “monitoring” and about eighty-nine cents will buy you a bitter cup of coffee. So, as Obama’s critics got tougher, so did his rhetoric. The next day he again modified his official position, this time mustering enough righteous indignation to upgrade from “deeply concerned” to “appalled” and “outraged.”

Still, his instinctive impulse to equivocate was more than Obama could bear. In the same breath he reassured Iran’s despotic Mullahs and their puerile presidential puppet, Mahmoud Ahmadinejad that “the United States respects the sovereignty of the Islamic Republic of Iran, and is not at all interfering in Iran's affairs.”

Not really a “tear down this wall” kind of moment, but, with this president, I guess it’ll have to do.

All the same, what’s most puzzling to me is why anyone’s remotely surprised. Obama is a dyed-in-the-wool liberal; a postmodern “progressive”; a committed social and moral relativist.

The moral relativist, by definition, is bereft of moral clarity. The only thing immoral is to reckon there are things immoral. The only absolute truth is that there is no absolute truth. No fixed right or wrong; no black or white; only shades of gray.

Indeed our debonair young Commander-in-Chief sees the world through the murkiest of gray-colored glasses. Though evidence of this abounds, I can think of no starker example than his opposition to the Born Alive Infant Protection Act.

Born Alive very simply requires that when a baby survives an attempted abortion – when she is “born alive” – further attempts to kill her must immediately cease and steps must be taken to save her life.

In 2002, Born Alive passed the U.S. Senate with unanimous, bipartisan support. Yet Obama, while serving in the Illinois Senate, vehemently opposed its Illinois twin. He complained that “adding an additional doctor” (read: an actual doctor) to save the child’s life is “really designed simply to burden the original decision of the woman and the physician to induce labor and perform an abortion.”

Did you get that? To require that a doctor save the child survivor of a botched abortion would “burden the original decision” of the mother to kill her baby. The not-so-subtle implication, of course, is that they should, instead, put her aside until she dies. Or – as I attempt to hone that moral clarity, passé though it may be – deliberately kill her through wanton neglect.

This is infanticide by any objective measure; but not to the moral relativist, and not to Barack Obama. There is no such thing as an “objective measure,” you see, only a subjective “choice.”

So here it is in black and white: Black: It’s always wrong to kill babies. White: Doctors should make every effort to save the life of babies born alive. Gray: To require such would “burden the original decision” of a mother to kill her baby.

Black: It’s always wrong to kill peaceful protesters. White: The U.S. demands the killing stop or we will stop it. Gray: We’re monitoring the situation to see how it plays out.

But we can hold him accountable for it.

Matt Barber is an attorney concentrating in constitutional law. He serves as Director of Cultural Affairs with both Liberty Counsel and Liberty Alliance Action. Send comments to Matt at jmattbarber@comcast.net. (This information is provided for identification purposes only.)