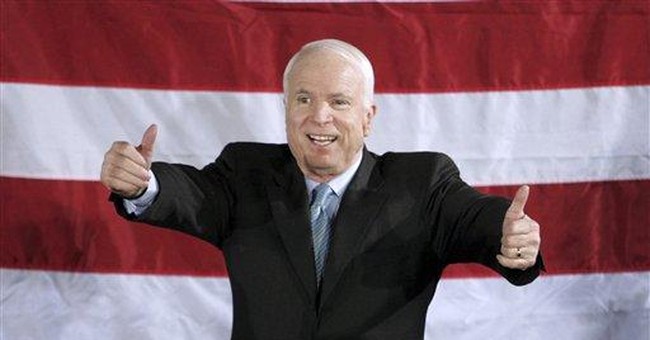 If conventional wisdom holds true and John McCain ends up the last man standing in this year’s Republican primary, he’s going to have his work cut out for him in the general election.

It’s no secret that many conservatives — not just Rush Limbaugh, Sean Hannity, Laura Ingraham and Ann Coulter — have major problems with McCain’s positions on a wide range of issues, as well as with many of the less than conservative, if not downright liberal, pieces of legislation he’s attached his name to.  One man’s “maverick” is another man’s “mealy-mouthed moderate.”

However, if McCain does get the nod, conservatives are not left without choices.  They can either “dance with the one what brung ‘em” and vote for McCain, sit this one out and hope a more appealing suitor comes calling in 2012, or try to send a message by strapping-up as a “suicide-voter” and pulling the lever for either Hillary or Obama (ala Ann Coulter).  That’s a personal decision each conservative will have to make.

Still, McCain can do a lot, in my estimation, to influence that decision.  If he hopes to have any chance at all, I submit he should get about the business of mending fences, posthaste.  He needs to offer conservatives some real assurances that he’ll adopt a Reaganesque approach to governance on the key issues.  He might win over a few conservatives if, at a minimum, he pledged to honor the Republican Party Platform.

Maybe it’s that “maverick” mentality, but, as of yet, McCain hasn’t seemed to extend much of an olive branch to conservatives; and when he has, it’s to whack ‘em upside the head.

Historically, it hasn’t really mattered who a presidential candidate picks as a running mate.  But this time around, I don’t see how it can’t.  If McCain goes with anyone other than a bona fide, dyed-in-the-wool fiscal and social conservative (both foreign and domestic), I suspect he’s toast.  He’ll likely join Al Gore in the “media darling maverick” hall of fame.

Democrats are coming out 2-to-1 over Republicans in the primaries this year, and GOP dysphoria hangs in the air like whatever that smell is in Newark, New Jersey.

Speculation has already begun as to whom McCain might tap for his veep if he gets the nomination.  I’ve heard some good names and some bad ones.  There are many quality conservatives for McCain to choose from, but a name I haven’t heard mentioned is former Oklahoma congressman J.C. Watts.

Now, it’s quite possible the good congressman won’t appreciate my throwing his name out there at all, but it seems to me that, barring some major skeletons in his closet, J.C. Watts could bring a lot to the table.

He’s a rock-solid social and fiscal conservative and is pals with Sean Hannity and Rush Limbaugh.  If he were on the ticket, it might placate conservative heavy hitters just enough to call off the dogs.

He’s a former minister and is 100 percent pro-life, pro-family and pro-traditional marriage.  This is a must for evangelical voters, who make up the preponderance of the GOP base.

Congressman Watts is young, vibrant, articulate and from the South (well, Southish).  He’s a former Oklahoma Sooners football star and, I believe, would appeal to conservatives both young and old.

Oh yeah, and J.C. Watts is African-American.  This might attract minorities whose values — especially on social issues — are more closely aligned with those of Watts than Clinton or Obama.

So, again, I’m not suggesting that J.C. Watts is the only potential running mate for McCain who might convince conservatives to poke his chad, or, for that matter, that any VP choice can.

But, since it’s the season for speculating about possible vice presidential candidates, I thought I’d go ahead and speculate.