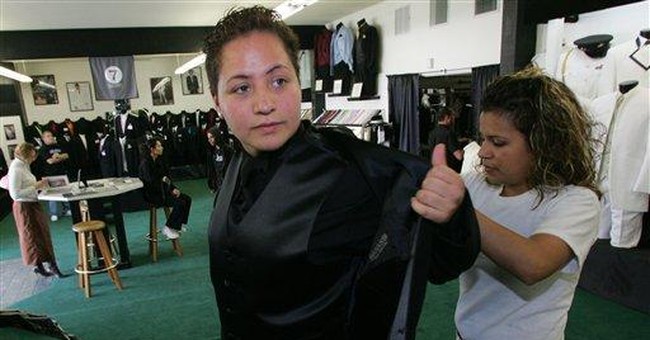 "They feel kind for a season, but remain blind to all reason."

Such is the nature of political correctness. And in that spirit, lawmakers — who are purportedly sane — plan to take us all on a "long strange trip" through a mystical fantasyland where the impossible is possible and the objectionable is obligatory.

A vote is expected soon on the pro-homosexual "Employment Non-Discrimination Act" (ENDA). This dangerous bill threatens to codify the very thing it purports to prevent — workplace discrimination.

In the meantime, two stories. One is fiction, the other is real. Both are fantasy:

Sean was a redheaded, freckled lad of pure Irish descent. Growing up, he always felt something was wrong. He didn't like green beer, corned beef hash or any of the other things the Irish were supposed to like. Rather, he was fascinated by African-American culture and eventually made the self-determination that he was, in fact, a black man trapped in a white man's body. No, not like Vanilla Ice, Eminem or other posers; Sean actually believed it.

There were others, and a movement was formed. They called themselves "transracial" and made up fancy, official sounding terms like "race identity" and "race reassignment surgery." They demanded special rights and government-mandated benefits such as affirmative action and reparations.

Okay, that hasn't happened yet (that I know of). But, try this one on for size:

Sean was a burly truck driver. Growing up, he always felt something was wrong. He preferred Barbie to G.I. Joe and didn't like football or the other things boys were supposed to like. Rather, he got twitterpated by the way pantyhose felt against his skin and eventually made the self-determination that he was, in fact, a woman trapped in a man's body.

There were others, and a movement was formed. They called themselves "transgender." They made up fancy, official sounding terms like "gender identity" and "gender reassignment surgery" and demanded they be granted special rights and government-mandated benefits.

Get the picture? Well, now Sean number two and other "gay" and she-male activists may get their wish — and parents may well be forced to explain to Junior why Ms. Johnson at parochial school has a five o'clock shadow, calves like Schwarzenegger, an Adam's apple the size of a golf ball and is stuffed into a miniskirt like a ten pound turkey in a five pound bag.

ENDA would force all Americans who prefer to live within the realm of reality to pretend, by force of law, that a man is a woman — that an apple is an orange, simply because that apple thinks it's an orange (awkward, fruity pun not intended). It's "The Emperor's New Clothes" meets George Orwell, and even if you're the Mary Lou Retton of mental gymnastics, you land flat on your keister on this one.

This bill pits the government directly against religion which is unconstitutional on its face. It would force employers to check their First Amendment guaranteed civil rights at the workplace door by not allowing them to consider sexual morality — in any way — while hiring or firing. It would make federal lawbreakers out of Christian, Jewish or Muslim business owners who honor their faith and would require that newfangled "gay rights" — based entirely upon an individual's chosen sexual behaviors — trump an employer's enumerated constitutional rights.

But ENDA sits atop a house of cards. Homosexuals and cross-dressers are a privileged group, not an oppressed minority as activists would have you believe. The U.S. Supreme Court has devised a three part test to determine whether a class of persons qualifies as a true minority: They must be defined by an immutable characteristic (unchangeable, like skin color), they must be economically deprived, and they must suffer from a history of discrimination and political powerlessness. Homosexuals and cross-dressers fit into none of these requisite categories. Instead, the facts show that homosexual behavior is changeable, that homosexuals are largely affluent, and that homosexual activists represent one of the most powerful lobbies in the world per capita.

Furthermore, proponents falsely claim that the bill contains a religious exemption. But it's entirely illusory. At best, only churches — and essentially pastors — could be exempt from the provisions of ENDA, and that's not even guaranteed. All other faith-based organizations — even those which are tax exempt — would be discriminated against under this bill. Groups such as Christian schools, Christian camps, faith-based soup kitchens and Bible book stores would be forced to adopt a view of human sexuality which directly conflicts with fundamental tenets of their faith. ENDA would ultimately give liberal judges the authority to subjectively determine who qualifies for the exemption. It's the goose that laid the golden egg for homosexual activist attorneys, and it would open the floodgates for lawsuits against employers who wish to live out their faith and even those who don't.

Finally, the bill legalizes sexual harassment. It states that "denial of access" to workplace facilities such as restrooms and dressing rooms based on gender is only allowed for "shared shower or dressing facilities in which being seen fully unclothed is unavoidable." This means that female employees would have to endure both systematic sexual harassment and a hostile work environment by being forced to share bathroom facilities with any male employee who got his jollies from wearing a dress.

But other than that, ENDA's great! In fact, it may not go far enough. I mean, while we're at it, shouldn't we include protections for people based on "species identity?" If a man gets in touch with his inner horse and wants to run in the Kentucky Derby, let's force Churchill Downs to make it happen. It makes as much sense.