Queer Topic for a Presidential Debate 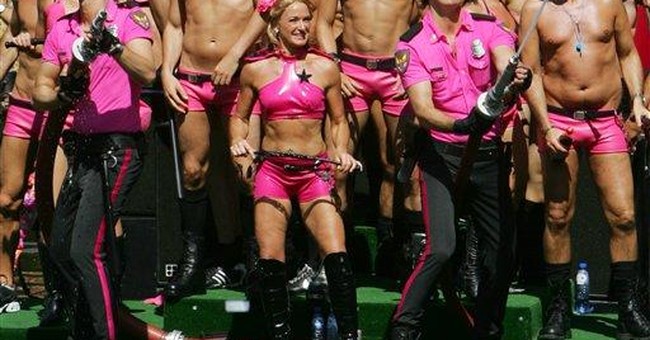 Organizers were clearly expecting the candidates to fall all over themselves trying to prove to the world who was most sympathetic to the left’s twisted version of “tolerance” and “diversity.” And for those anticipating a drastically lopsided “gay”-affirming love-fest, the debate didn’t disappoint. No questions were presented from a traditionalist standpoint.

All the candidates expressed their support for the homosexual lobby’s fundamental legislative wish list. Each endorsed the repeal of Bill Clinton’s “don’t ask, don’t tell” policy, which would allow open homosexuals in the military. Each supported granting homosexuals and cross-dressers specially protected minority status relative to employment (this would require a religious business owner, despite a sincerely held religious belief that such behaviors are immoral, to hire an openly homosexual man who likes to wear lipstick, high heels and a skirt), and each backed some form of legal marital recognition (“civil unions”) for homosexual relationships. Only Kucinich and Gravel would actually call it “gay marriage.”

All in all, the audience evidently got the answers they were hoping for (with the exception of a unanimous endorsement for “same-sex marriage”). However, the crowd collectively gasped when Governor Richardson said that homosexuality is “a choice,” rather than an inborn trait, momentarily sucking all the hot air from the room.

The debate represented the culmination of decades of relentless propaganda, intended to justify and promote the homosexual lifestyle, foisted on society by an assiduous homosexual lobby. But despite the striking effectiveness of that propaganda, militant homosexual activists, “gay”-friendly politicians and the liberal media apparently still have their work cut out for them.

In fact, those candidates who chose to participate in Thursday’s debate and expressed support for the homosexual activist agenda may have done so to their own detriment.

A new study has determined that backing the homosexual lobby is more likely to hurt, rather than help, a presidential candidate’s chances of calling 1600 Pennsylvania home in 2008.

The survey determined that voters were less likely to vote for a candidate who supports the homosexual agenda than one opposes it by a nearly three-to-one margin. And by an average of 53-to-33 percent, voters agreed that “homosexual acts between two individuals are immoral,” as candidly observed earlier this year by General Peter Pace, outgoing Chairman of the Joint Chiefs of Staff.

Since 1960, victory in at least two of these three states has been necessary for any candidate to win the Electoral College. It will be interesting to see how those candidates who have chosen to endorse and enable the homosexual lifestyle will fare in the 2008 election.

But the fact that this debate even took place is a sad commentary on the moral state of our union. It’s shameful that our nation’s moral standards have nose-dived to the point that it’s now considered good and “tolerant” to hold a debate organized entirely around the promotion of sexual immorality.

What’s next? Are presidential candidates going to be asked to participate in a debate on how to garner widespread acceptance of adultery or incest? Are members of the growing polygamy lobby and the pedophile group NAMBLA going to tap candidates for a televised debate to promote their chosen lifestyles?

Thousands of years of history, every major world religion, the unambiguous science of human biology and good old-fashioned common sense have established that homosexual behaviors are both immoral and destructive to the lives, health and spiritual well-being of those who choose to participate in those behaviors.

Something that didn’t come up in the debate: The Centers for Disease Control and Prevention (CDC) recently revealed that 71 percent of all males living with deadly HIV/AIDS were infected with the disease through homosexual behaviors. That’s up 11 percent from 2001. Furthermore, the CDC has determined that homosexuals — especially males — are by far at greatest risk for nearly all forms of sexually transmitted disease as well as other lifestyle related injuries. This, in spite of — if not due to — so-called “comprehensive,” condom-based “safe-sex” education.

But we shouldn’t really be that surprised. Scripture tells us that indeed we “all have sinned and fall short of the glory of God.” But God’s Word also says, “Woe to those who call evil good, and good evil; Who put darkness for light, and light for darkness; Who put bitter for sweet, and sweet for bitter!” (Isaiah 5:20, NKJV).

The good news is that although “the wages of sin is death,” we all have access to a loving and forgiving Redeemer in Christ who selflessly offers freedom from the spiritual and physical death which is a natural consequence of immoral self-indulgence.

And on that, there’s no debate.