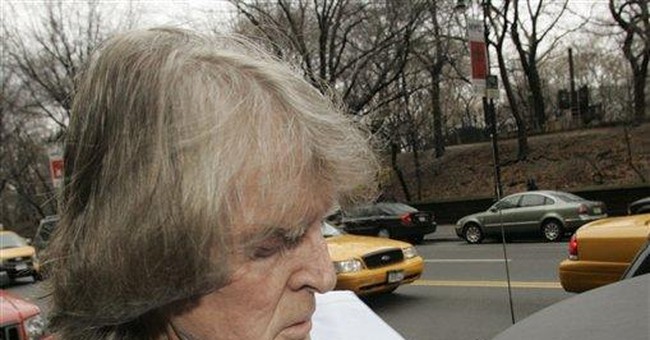 Don Imus, recently unemployed pioneer of the high-dollar “shock-jock” industry, is a truly gifted man. He has the rare but unenviable ability to really tick people off at both ends of the political spectrum and everywhere in between. To the chagrin of the leftist anti-war “you baby killer” crowd, he’s been a staunch defender of our wounded troops at Walter Reed. Yet he’s made a habit of regularly bashing social conservatives and President Bush, having even gone so far as to suggest that government mismanagement of Hurricane Katrina occurred because Bush is a closet racist.

Everyone on the face of the earth knows by now that Imus was recently fired by MSNBC and CBS for calling members of the Rutgers women’s basketball team “nappy-headed hos” in a botched joke that makes Massachusetts amateur comedian and U.S. Senator John Kerry’s stand-up play like Johnny Carson.

Imus’ comments were racist, sexist, reprehensible and extremely unfair to those extraordinary young women who are mostly just kids. Their fathers and brothers are no doubt itching to take the “I-Man” out behind the woodshed for a not-so-tender lesson in “how to properly respect the fairer sex.”

But instead, Imus sheepishly allowed himself to be dragged behind the woodshed for a verbal thrashing by self-proclaimed “civil rights champion” Al Sharpton. Imus went on Sharpton’s radio program shortly after the story erupted in an apparent attempt to salvage his career. Sharpton, who many argue is himself a fire-breathing anti-white, anti-Semitic racist, sang lead tenor in the colossal chorus demanding Imus’ ouster. But based on Sharpton’s own racial gaffe quotient and by his own standard, shouldn’t he be standing in the unemployment line right next to Imus? You have to ask, where in the deepest pits of purgatory does Sharpton get off asserting any moral authority on this issue whatsoever?

Here’s just one of the many examples which highlight Sharpton’s harmonious and penetrating racial wisdom: While giving a speech at New Jersey’s Kean College in 1994, Sharpton walked headlong into his own Imus-ism when he judiciously and eloquently opined, “White folks was in caves while we was building empires ... We taught philosophy and astrology and mathematics before Socrates and them Greek homos ever got around to it.”

But there was no uproar … No outrage … No clamor for Sharpton’s head on a silver platter. And apart from a very few low-key media reports, we heard nothing but chirping crickets.

Examples of this liberal double standard are plentiful, but hypocrisy and intellectual dishonesty are character traits so deeply embedded in leftist DNA that we no longer even take notice. And of course the mainstream media, which is charged with pointing out such hypocrisy, happens to be cut from the same ideological cloth, so don’t expect any help from them.

As for Imus’ comments, the fundamental question is this: Are we really that surprised that Don Imus would belt out such verbal rot in a society that celebrates and emulates the racist and misogynistic hip-hop, “gangsta-rap” culture? Central to the hip-hop/rap lexicon is an apparent need to systematically demean women by branding them “b*tches” and “hos,” sometimes even suggesting that it’s somehow macho to slap them around a bit. Additionally, it’s common for young black men in the culture to refer to themselves and one another as “pimps” and the “n-word.”

Although none of this provides justification for Imus’ disgusting comments, the mixed message it sends might at least explain to a certain degree why he mistakenly felt it was appropriate to say what he said.

As for Sharpton, in the interest of full disclosure we should point out that “Reverend Al,” who rarely deserves credit for much of anything, has at least gingerly criticized the seedier side of the hip-hop/rap culture in the past.

But why hasn’t he called for the firing of rappers Jay-Z, Ludacris and Djay for essentially parroting the “I-Man’s” racist and sexist comments? Why hasn’t Sharpton and his merry band of lefties demanded that the white rap industry executives who get filthy rich off this swill also get the axe? Sharpton went after Imus like a Pit Bull on a Pekingese, stopping just short of demanding he be hung upside down and peeled alive. So what gives? Why the double standard?

Simple answer. Now that Imus has been cut, the left smells blood in the water and the feeding frenzy’s afoot. The Imus affair is just the opening salvo. It’s already being parlayed into a larger scheme to muzzle Christian conservative policy organizations, the Fox News Channel, conservative talk radio and anyone else who would dare to publicly espouse a conservative viewpoint.

In the wake of the Imus debacle, David Brock, president of the highly influential and extremely liberal Media Matters “watchdog” group, didn’t even try to conceal the left’s strategy. He nonchalantly spread the First Amendment out on his kitchen floor so puppy could potty, threatening, “More and more Americans are coming to understand the damage done by major news organizations providing a platform for bigoted commentary and other conservative misinformation. … This decision sends a clear message to other networks, journalists and media personalities that bigotry and hate speech have no place on America's airwaves.”

Try this one on for size. While writing in The New York Times, homosexual actor and “gay” activist Harvey Fierstein was encouraged by the Don Imus gag order saying that it signaled the “eventual eradication” of all “expressions of intolerance.” So if you happen to believe that homosexual conduct is both immoral and high-risk behavior, as the Bible and medical science establishes, then consider yourself targeted for “eradication.”

But who defines the terms, and what criterion is applied? Who decides who enjoys freedom of speech and who suffers “eradication?” And what exactly is, “bigoted commentary,” “expressions of intolerance,” “hate speech,” and “conservative misinformation,” you might ask?

Well, it’s anything those jackbooted thought police on the left say it is, don’t ya know. And those of us found in violation of this dogmatic PC speech code – as I am right now – run the risk of public blacklisting and indefinite unemployment. After we’re sentenced by this McCarthyist tribunal, we can evidently look forward to being shackled, dragged off to a “progressive” re-education “rehab” camp and furiously flogged with a rolled up copy of The New York Times until we’re properly whipped into ideological submission.