Pro-‘Gay’ Bullies Pick Up the Pace 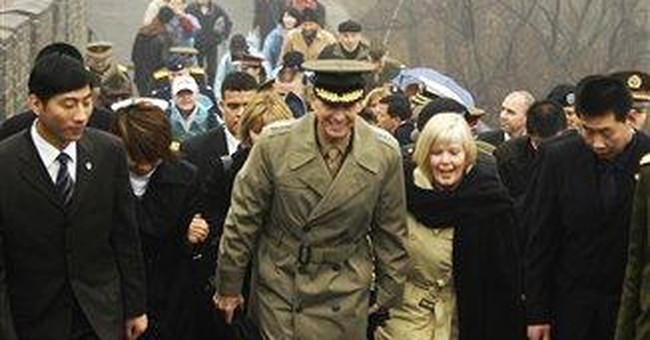 Marine General Peter Pace – decorated war hero and Chairman of the Joint Chiefs of Staff – continues to find himself fending off a vicious and unfamiliar rapid fire assault from his extreme left-flank. In recent days, the good general has been widely and unjustly vilified by America’s self-appointed thought police as they step up their unified and widespread campaign of homofascist speech enforcement.

During a recent interview with the Chicago Tribune, Pace violated one of the cardinal rules of political correctness by noting that, “homosexual acts between two individuals are immoral.”

While defending the military’s “don’t ask don’t tell” policy, which allows homosexuals to serve in the armed forces as long as they keep their – umm – “unorthodox” sexual preferences and behaviors private, Pace compared homosexual acts to other acts of sexual immorality such as adultery, and explained that under the current policy – which Bill Clinton signed into law in 1994 – acceptance of open homosexual behavior in the military would amount to government sanctioning of immorality.

Not surprisingly, many of those non-judgmental, freedom-loving moral-relativists on the left are up-in-arms, demanding that Pace apologize and offer a full retraction or be fired (which would of course be disingenuous, entirely meaningless and have no effect on the veracity of his comments).

Those lobbing the bombs comprise that motley crew of usual suspects including today’s Stepford-wife hippy burnouts in the mainstream media and their like-minded “progressive” politicos in government.

Liberal Senators Barack Obama and Hillary Clinton have come-out (no pun intended) against General Pace, and despite the fact that both profess to be Christians, have unilaterally declared – without explanation – that homosexual behavior “is not immoral.” They’ve somehow determined that God almighty, the Bible, every major world religion, the unambiguous science of human biology and good-ole common sense have simply had it wrong for – oh – these past several thousand years or so.

But those leading the charge against General Pace and demanding his head on a silver platter represent a very specific and particularly radical faction of an already extreme left-wing.

They’re the self-styled champions of “tolerance” and “diversity.” Their carefully crafted propaganda is peppered with provocative and sensational code-words like “hate,” “violence,” “bigot,” “homophobia” – and on and on, ad infinitum.

They are militant, organized, extremely powerful and well funded. Through clever semantics and shrewd political subterfuge they cynically play to honorable notions of freedom and fair-play in order to push a deceptive and activist agenda.

They are the radical homosexual lobby, and when it comes to America’s first liberties (free speech and liberty of conscience) they are anything but champions of tolerance and diversity.

Theirs is a carefully orchestrated and skillfully executed scheme not only to undermine, but to abolish from public discourse, any words – or even thoughts – which might stem from the traditional Judeo-Christian worldview upon which our great nation was founded.

Their agenda: To mandate that only a secular-humanist worldview may be properly entertained or referenced. That worldview is one in which morality is entirely relative, and any reference to traditional notions of natural human sexuality, the natural family, or any fixed lines of demarcation between right and wrong are “hateful,” “discriminatory,” and to be strictly forbidden by force of law.

Both the mainstream media and Hollywood’s yappy celebrity wind-up dolls are the “gay” lobby’s ever-so willing accomplices. Liberal lawmakers and judicial activists work overtime in tandem with homosexual groups like the “Human Rights Campaign” (HRC), The Servicemembers Legal Defense Network, and The National Gay and Lesbian Task Force to get the job done.

This unholy amalgamation of left-wing storm troopers has been empowered by both the November elections and a recent upsurge in successful speech enforcement; and they’re rapidly ramping-up efforts to completely silence any criticism of this high-risk, pleasure-centric and dare I say, “immoral” lifestyle.

Case in point: Just this past Tuesday Congressman John Conyers (D-Michigan) introduced the Local Law Enforcement Hate Crimes Prevention Act of 2007 (HR 1592). This bill is a fraud on its face, and would grant sweeping and entirely subjective power and authority to the federal government to regulate the thoughts, words and actions of Americans. It would essentially create a “Federal Department of Thought Enforcement.”

Make no mistake; anyone who commits a violent crime should be prosecuted to the full extent of the law regardless of a victim’s lifestyle choice. And there are currently laws on the books to ensure that all victims of violent crime receive equal justice under the law. However, this bill elevates the status of homosexuals (“sexual orientation”) and gender confused cross-dressers (“gender identity”) to a special and more valuable class of citizen based upon their chosen sexual behaviors and/or wardrobe.

HR 1592 would require federal officials to get into the mind of an offender, subjectively divine his thoughts, and arbitrarily pronounce whether acts (or very likely words) directed at homosexuals or cross-dressers were somehow motivated by bias. If it’s decided that they were, then the offender is slammed with a much heavier sentence.

All things being equal, this means that if your 5-foot-2-inch grandmother were attacked in her home and a 6-foot-4-inch homosexual linebacker who likes to wear lipstick and high-heels were attacked by the same assailant, the “gay” linebacker would be treated as more valuable to society, and the crime would officially be considered more egregious.

But it’s not just criminals who are targeted by “hate crimes” legislation. This bill irrefutably sets the table and places us on the slippery slope toward widespread government persecution. HR 1592 more accurately resembles dictates born of Joseph Stalin’s communist Russia than it does the constitutional precepts born of George Washington’s America.

Similar “hate crimes” laws are being used around the world to silence and incarcerate people who believe, as General Pace, that homosexual acts are immoral. Brazil is poised to officially make it criminal “hate speech” to publicly express any opposition to the homosexual lifestyle (which would include reading aloud the many Bible verses that do just that). And Sweden, Canada and the United Kingdom are likewise imposing criminal and/or civil sanctions for similar speech. Under these laws, Christ’s Apostle Paul would have been thrown in prison all over again for saying that unrepentant homosexuals would “not inherit the Kingdom of God.”

But perhaps most chilling is the fact that right here in America, state “hate crimes” laws have already been used to silence and persecute people with traditional values. In Philadelphia, for instance, eleven Christians who were recently attempting to share the Gospel with a group of militant homosexual activists at a public “‘gay’ pride” festival were summarily arrested and jailed under Pennsylvania’s “hate crimes” law. That law almost directly mirrors HR 1592. These people were criminally charged for their words and beliefs alone… No violence; no crime; just speech.

So, don’t doubt for a moment that under HR 1592, the express Judeo-Christian position that, “homosexual behavior is immoral,” which was recently voiced by General Pace, and is shared by a majority of Americans will, in relatively short order, constitute criminal “hate speech” if uttered in public.

And that’s precisely the true goal of such legislation… to attack the 1st Amendment’s guarantees of free speech and liberty of conscience and to give abhorrent and disordered homosexual behaviors official government legitimacy, arming the PC police with a weapon of mass destruction in their crusade to silence all opposition to the homosexual lifestyle.

But as for the hateful and feverish media attack General Pace continues to endure… to his credit, he’s managed to stand his ground thus far. And fortunately for him, if HR 1592 does become law and is wielded as similar laws have been, he can’t legally be charged with any crime after the fact (ex post facto).

A couple of days after making his comments to the Tribune, General Pace said that perhaps he “should have focused more on [his] support of the policy and less on [his] personal moral views.” But aside from that slight backpedal, this tough old Marine – who once threw himself in front of a fellow soldier to take a sniper’s bullet – has refused to apologize and is once again exhibiting extreme courage under fire.

Shameful, however, is the fact that General Pace has received very little by way of cover.

One would hope that President Bush would handle this domestic assault on traditional values and free speech in the same manner he’s handled rabid criticism of his foreign policy… By standing firm and defending his troops.

Even more importantly though, is that once HR 1592 ultimately slithers its way under the Oval Office door – which it almost certainly will – the president must show the kind of mettle that comes so naturally to General Pace.

Let’s hope and pray that the president has the political courage to dust off his magic veto pen – which unfortunately remains nearly full of ink – and send this fraudulent “hate crimes” measure back in time to its giddy proponents’ much-loved Soviet Russia where it more suitably belongs.