The Politically Incorrect Americanism of Alba, Pacino, and Arnold 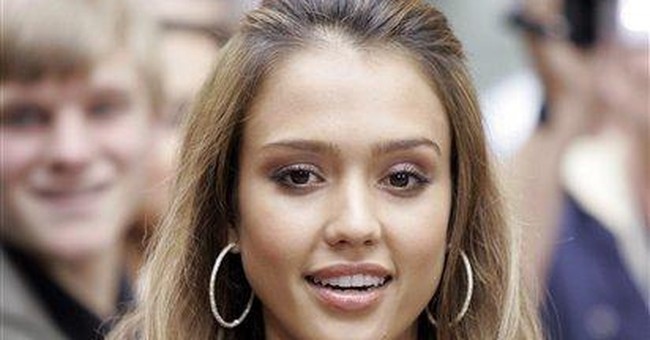 Jessica Alba doesn’t. Is there anything wrong with that? Apparently so.

The third-generation American and actress is under fire this week from fellow Latinos for comments she made to Para Todos magazine:

Alba is my last name and I'm proud of that. But that's it. My grandparents were born in California, the same as my parents, and though I may be proud of my last name, I'm American. Throughout my whole life, I've never felt connected to one particular race or heritage, nor did I feel accepted by any. If you break it down, I'm less Latina than Cameron Diaz, whose father is Cuban. But people don't call her Latina because she's blonde…

My grandfather was the only Mexican at his college, the only Hispanic person at work and the only one at the all-white country club. He tried to forget his Mexican roots, because he never wanted his kids to be made to feel different in America. He and my grandmother didn't speak Spanish to their children. Now, as a third-generation American, I feel as if I have finally cut loose.

My whole life, when I was growing up, not one race has ever accepted me, ... So I never felt connected or attached to any race specifically. I had a very American upbringing, I feel American, and I don't speak Spanish. So, to say that I'm a Latin actress, OK, but it's not fitting; it would be insincere.

She never felt connected to any race, specifically, but she always felt American. That doesn’t sounds like a bad thing, does it? And yet, it is, in the eyes of many activists.

One blog post on the comments remarks, “Guess sell-outs come in all races and sizes.” Another calls it a “disturbing hoard of quotes.” Another claims she “hates Mexicans.”

Comments about Alba’s comments include, “F**K YOU THEN, JESSICA…VIVA LA RAZA!!!,” “She should just change her last name to White, then,” and “I thought she could be a good role model for Latinas, but she is a fake, tryin’ to be white.”

Alba wasn’t trying to make a political statement. Instead, she sounds like she was trying to avoid speaking for an entire ethnicity and many recent immigrants when she barely speaks Spanish, and identifies as an American first. But because she didn’t reflexively take upon herself her ethnic mantle and collective responsibility, she’s bashed as a traitor to her race.

Elsewhere, a phenomenally successful first-generation immigrant was sharing his secret to success in America, which was much the same as the approach Alba’s college-educated grandfather took. When addressing the national Association of Hispanic Journalists, and responding to question about how Hispanics can improve academically, California Gov. Arnold Schwarzenegger said:

"You've got to turn off the Spanish television set" and avoid Spanish-language television, books and newspapers, the Republican governor said Wednesday night…

"You're just forced to speak English, and that just makes you learn the language faster," Schwarzenegger said.

"I know this sounds odd and this is the politically incorrect thing to say, and I'm going to get myself in trouble," he said, noting that he rarely spoke German and was forced to learn English when he emigrated from Austria.

The response from those in attendance?

"I'm sitting shaking my head not believing that someone would be so naive and out of it that he would say something like that," said Alex Nogales, president and chief executive of the National Hispanic Media Coalition.

Naïve, out-of-it, hateful, traitorous. There is a large segment of the country that believes it’s somehow disrespectful to emphasize assimilation among new immigrants to the country.

And, it’s not just among leftist activists and left-coast gossip bloggers that this idea prevails. Just last year, Sen. Harry Reid called a proposal to make English the official language of America “racist,”  despite the fact that a large majority of Americans support such a measure.

More recently, Barack Obama called the very discussion of English as an official language, “divisive” during a Democratic debate:

I have to say that this is the kind of question that is designed precisely to divide us. You know, you’re right: everybody is going to learn to speak English if they live in this country. The issue is not whether or not future generations of immigrants are going to learn English. The question is, how can we come up with both a legal and sensible immigration policy? And when we get distracted by those kinds of questions, I think we do a disservice to the American people.

But is everyone going to learn English, Sen. Obama? It seems that Schwarzenegger’s encouragement of English-language immersion for immigrants and Alba’s family’s decision to speak English only are put down in pretty harsh terms by folks on your own side of the aisle.

The movement to make English the official language of America is, in part, a response to the Left’s active discouragement of assimilation. Even the idea of the “melting pot” went out of style when I was in grade school, replaced in text books by the less offensive “mosaic.” You see, now we don’t do anything so gauche as melt into one, cohesive society. Instead, we are all obligated to hold onto our various ethnic and cultural identities and languages, building little barriers between communities, lest we be accused of “selling out” or trying to be too “white.”

The English language and cultural assimilation are unifying forces, economic passports, essential parts of preserving the American dream and all its blessings for everyone who comes to our shores.

When talking about comprehensive immigration reform, some have compared today’s illegal immigrants—the challenges and the prejudices they face—to legal immigration of Italians and Irishmen and others who came through Ellis Island just a few generations ago. But those same people conveniently overlook that anti-assimilation forces in America weren’t nearly so strong at that time.

Al Pacino is a second-generation American whose grandparents emigrated from Sicily, but despite living in his grandparents’ home, he speaks no Italian. Would anyone accuse that iconic Baby Boomer of being a traitor to his ethnicity? Well, he better watch out, if he keeps talking like this:

Alba, Schwarzenegger and Pacino have got it right. Their concern is with becoming successful, individual Americans, not with specious collective responsibilities imparted to them by their skin colors, accents, or surnames. As a result, they have all done both America and their ancestors proud. They are all walking, talking, acting illustrations of the American dream in action.

When considering legalizing 12 million illegal immigrants, Congress should consider seriously the fact that the walking, talking American dream is now politically incorrect. That doesn’t bode well for its survival.