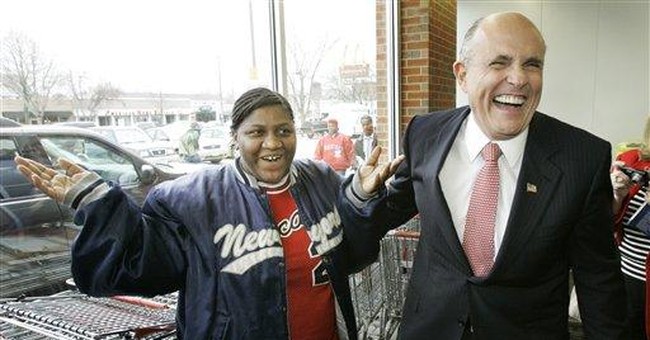 If you listened closely this week, you might have heard Rudy Giuliani’s presidential campaign crack. Like the hard smack of a pebble against a car windshield, Rudy’s reiteration of his support for public funding of abortion put a knick in his veneer that will keep snapping, crackling, and popping in all directions if there isn’t some serious repair work done, but quick.

First of all, let’s get something straight. I’m a Rudy fan. I like the smile and the strut and the machismo, and all that they portend for both my constant entertainment and consistent protection under a Giuliani administration.

I’ve been delighted to see him become a front-runner in the Republican race for 2008 based on a potent combo of crime-fighting power and charisma. Like McGruff, with less hair. I’m far from knowing I’m behind any one candidate, but I was all ears for Rudy.

As a fiscal/security conservative first, I was willing to consider what Giuliani offered—security creds, tax cuts, terror clarity, electrifying speechifying, and good judges—even if he wasn’t totally in line with my social policy preferences.

But a lot of other people have been willing to listen, too. Unexpected people in what should be Rudy’s toughest crowds—women’s bible study groups in Georgia, members of the Iowa Christian Alliance, Bible-Belt admirers of the tough guy from Manhattan.

It’s no secret that likeability can a president make or break. Just look at the last two failed Democratic nominees for proof. People have wondered why conservatives have been more receptive to Rudy than politicos have expected them to be, especially in comparison to the more palatable-on-paper John McCain. Surely, it’s because they don’t know enough about him yet, the prognosticators say.

But this week, with his Medicare Part Abortion endorsement, he dealt a serious blow to his support among fiscal conservatives by demonstrating that the man we were assured was a pretty rock-solid fiscal conservative is willing to support throwing public money at the most dubious and divisive of causes.

And, among social conservatives, where his support had been a burgeoning surprise, the CNN clip will undoubtedly be one, big blundering soundbite.

I was in Des Moines, Iowa this week, at a Rudy rally. It was his first visit to Iowa, and the crowd—generally considered to be pretty socially conservative—was excited and receptive to America’s Mayor, if a bit smaller than I anticipated.

Among the sea of caucus-goers, I found more than several social conservatives who said they were willing to entertain the idea of a Rudy candidacy, based on his security and crime creds.

One woman, a member of the Iowa Christian Alliance, told me she wanted to “hear his story,” and was waiting to be convinced he was someone she could support.

Steve Scheffler, head of the Iowa Christian Alliance, said his organization is hoping for outreach from Rudy, but hasn’t gotten any as of yet. Scheffler’s been arranging house parties and other small meetings with Christian conservatives for McCain, Brownback, Huckabee, and Romney, but the Giuliani campaign has yet to approach.

“We’re hoping they’ll do that, but so far, it hasn’t happened,” he said.

“They’d like to sit down and talk,” Scheffler said of the Alliance’s membership. “We don’t want to be too presumptive… In this election, I just think this constituency is thinking ‘I don’t know where to go.’”

Public funding for abortion? One thing’s for sure. They’re not gonna go there.

Rudy’s camp and Rudy himself were backtracking on Thursday. Rudy was in abortion-unfriendly South Carolina saying that choices about public funding for abortion should be made on the state level.

His camp claimed Wednesday that Rudy would change no part of current law to increase the number of circumstances under which abortions can be publicly funded.

I was pleased that social conservatives were leaving the door open to America’s Mayor. But I think the last couple of days, he’s taken an open door and slammed it in his own face, by revealing a disconcerting squishiness on fiscal issues, where he was presumably strong, and betraying a more serious parting of ways with social conservatives than the considerable parting conservatives had already assumed.

It seemed a clumsy move—an unrehearsed answer more than a heartfelt conviction—which begs the question, why the heck doesn’t Giuliani know every possible answer there is to give on abortion?

I had assumed his reticence on social issues was part of a take-it-or-leave-it principled man persona that he was using to avoid the start of negative coverage so early in the game. After all, if you’ve got enough charisma to skate on, then skate on, brother.

I had assumed his lack of outreach to Christians was a symptom of a late campaign start, or an oversight that could be repaired. Eventually, I thought, he’d reach out and convince social cons to take the Rudy deal.

But this anecdote, overheard at a New Hampshire house party, suggests something different:

After the house party, the mayor met with his hosts and a few influential Republicans in the bar at the hotel where he was staying and where a few reporters had also decamped. In a voice loud enough to be overheard on the other side of the room, he outlined his view that the other candidates would divide up the “right-wing,” voters, as he called them, leaving him to consolidate the moderates and the economic and military conservatives who aren’t fixated on social issues.

If Rudy abandons his signature respect for the “right wing,” he’s just John McCain with worse conservative creds. That and buck may get him a coffee in Iowa, but that’s about it. I, for one, suspect he’s both a better man and a better politician than that, but the Mayor better be snappy if he wants to repair the crackle, pop that streaked across his campaign this week.

I hope he can, if for no other reason than I’d like to see some more of that electrifying speechifying as the man from New York tries to sell it to the Heartland.