Veterans on VA: 'Get the politics outta the system' 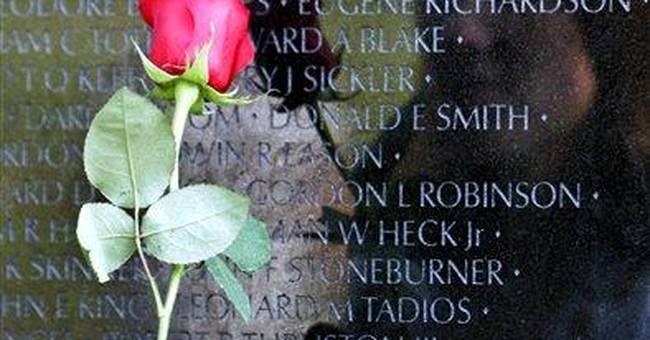 I learned long ago that if you want to hear the talk among veterans, you gotta go to the bar at the VFW Post. That’s where you’ll find men who’ve gone from the Halls of Montezuma to the halls of modest Midwestern ranch houses, men who’ve tamed the wild blue yonder glugging from tame blue cans of Miller Lite. Seemingly ordinary men who have been extraordinary heroes.

They’ve fought for their lives in jungles and deserts, so they could come back home and live them on the plains and in the mountains of the country they kept free. The American veteran is a proud man, often reticent about his experiences far from home, but happy to talk about the home he fought so hard to protect.

He’s also sometimes a sad or angry man, when he reflects on what he sees as the country’s failure to give back to those who gave so much.

I was at the bar at the Omni Shoreham Hotel this week in D.C., which had become a temporary VFW Post for thousands of veterans from around the country during the Veterans of Foreign War’s annual convention. As always, the convention was a time to share a drink, see old friends, and reminisce with the only folks who truly understand combat and the scars it can leave.

This year, it was also a time to be sad and angry about failures in veteran health care at Walter Reed and at Veterans Affairs hospitals around the country.

The American veteran is a man of indomitable political spirit, but unpredictable political philosophy. I met a retired Army Major who served in Vietnam who said he knows “Dick Cheney’s lying when his lips move,” but he also told me that Congressional Democrats are too busy using the Walter Reed scandal as a political bat to bother solving the problem.

I met a Desert Storm Marine whose favorite candidates for ’08 are Obama and McCain, but whose solution to the Walter Reed and VA problems is to employ “Adam Smith’s invisible hand.”

I met a Korean War vet who thinks Guard and Reserve units are being stretched too thin in a war we cannot win in Iraq, but who told me “veterans hate the French.”

At a VFW bar, conversation moves quickly from friendly ribbing, to bittersweet memories, to embittered rants about Congress.

John Lozanski, a Vietnam Air Force vet from Texas, walks into the kitchen of the hospitality suite to fill up his bourbon and Diet Coke. “Gotta watch the figure,” he says before slapping his stomach and exploding with laughter.

Jason Doran, a Marine vet from Texas, responds to someone’s classification of the Marines as part of the Department of the Navy—“Yeah, the men’s department.”

The good humor is genuine, but so is the frustration after spending a day on Capitol Hill trying to find a way to improve veterans’ health care.

A retired Major and Vietnam vet didn’t even venture to the Hill to see his representatives, “because I can watch them lie on C-SPAN.”

He concedes that the Walter Reed controversy has given veterans some extra time and attention from Congress this week—other vets told me they got much more personal face time with their representatives this week than they usually do—but doesn’t think it will last long enough to solve the problems.

“They’re putting on the air that they care,” he said, “But once it’s over, they’ll forget about these veterans just like they did the rest of them.”

For veterans, the fact that the VA system leaves much to be desired is old news.

“It’s really a horrible system,” the Major told me. “It always has been. What they should do is give everyone the same insurance as Congressmen have… Congressmen don’t go to the VA for their doctors. Give that to these veterans.”

Right now, according to the VFW’s figures, there is a backlog of 800,000 VA claims awaiting decisions on compensation, and sometimes a 6-month wait for such decisions.

Doran thinks the best thing for veterans would be to privatize the VA system, but doubts the possibility of ever getting that through Congress. When you have a choice, you go to a private hospital, not a VA, he said. If you privatized, elderly veterans wouldn’t have to travel sometimes hundred of miles to the nearest VA; they could just go to their local hospitals.

The VFW is requesting increased staffing, better training, and better accountability standards to make things run more smoothly, but several veterans I talked to think the free market would take care of accountability on its own.

Other veterans think better funding would fix the problems, and all are careful to give credit to those doctors and others who work hard against the bureaucracy to serve veterans at VA hospitals.

Bud, a Vietnam vet from Illinois said it’s disgraceful not to fund the VA just as much as it needs it. The VFW is asking Congress for a $2 billion increase in funding over what President Bush’s 2008 budget requests.


“I really believe that we can do it (improve veteran benefits),” said Matt Claussen, a Gulf War vet from Illinois. “But it will take all of us. We’re 24 million strong. If we have a voice, we can accomplish anything we want.”

A WWII vet and POW from Texas named Tiger told me he believes in veterans’ power to get things done. That’s why he’s come to the VFW convention, and met with his representatives every year for 40 years, though he admits that the stairs at the Capitol are starting to get to him.

Others aren’t so sure. The retired Major ranted to me about Congress—Republican and Democrat alike—to an approving audience.

“Get the politics outta the system,” he said. “I don’t know how to do it except don’t make it government employees…Stop that pork-barrel crap and take care of what needs to be taken care of.”

But as soon as his rant was done, the vets slid back into joshing each other and talking about ideas for new VFW scholarship programs and civic projects to help in their communities back home.

“It’s always a great exchange of ideas,” said Lozanski of the annual convention. “We do so much for the communities.”

“Whew, got my blood pressure up a little bit,” the Major said between sips of beer. “But I got a pill for that. Luckily, I don’t have to wait for the VA to give it to me.”

His fellow vets laughed but not without shaking their heads.