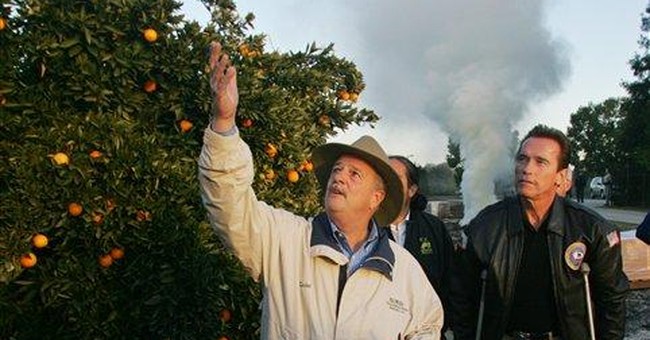 An unseasonable freeze wiped out 75 percent of California’s orange crop this week, but Congress is planning to wipe out any “price gouging” Big Orange executives have in mind.

Some experts predict that produce prices could double or triple in the coming months, but senators are making sure Big Orange answers for the squeeze it’s putting on American orange buyers. Some have suggested a windfall profits tax, with revenues distributed to lower-income juice-drinkers to help them get through their winter breakfasts.

Sen. Barbara Boxer, D-Calif., cited huge bonuses — atop huge salaries and stock options — the executives are getting while “working people struggle” to pay for orange push-pops and face the specter of soaring Juicy-Juice bills.

"To my constituents, today's hearing is about shared sacrifices in tough times versus orange company greed," Boxer said. "Working people struggle with high juice prices and your sacrifices appear to be nothing."

CEOs at the hearing defended their pricing and profits. Several executives noted that the industry faces costs of $1 billion to recuperate from damages caused by the recent natural disaster. One orange industry analyst predicted the problem for consumers shortly after the freeze hit, attributing it to a sharp decline in supply instead of “price gouging” on the part of orange moguls.

"We shut down all kinds of everything. This is the big one," said the analyst. "This is unmitigated, bad news for consumers."

One CEO, questioned about reports of a one-day doubling in the wholesale price of gasoline by Tropicana after the freeze, said he couldn't comment on that instance but denied the company was price gouging.

He said the company's pricing policy post-freeze was "to minimize the increase in price while at the same time recognizing that if we kept the price too low, we would quickly run out of oranges and have shortages of everything from creamsicles to orange-scented Pledge. Orange Julius would be out of business. Do you want that? It's a tough balancing act."

Senators shot back, saying they were facing pressure from orange-craving constituents to figure out who was “rigging” the prices.

“The orange companies' witnesses owe the company an explanation, and they owe it to us as those who represent the people,'' said Sen. Pete Domenici (R.—N.M.). “I expect the witnesses to answer whether you think your current profits are excessive and to talk about what they intend to do with the reserves and the profit accumulations that they have.''

The President is expected to address this hot issue in his State of the Union speech Tuesday. According to a high-ranking administration official, Bush will admit that “America is addicted to oranges,” and suggest millions in new funding to develop “cleaner, cheaper, and more reliable alternative orange sources.”