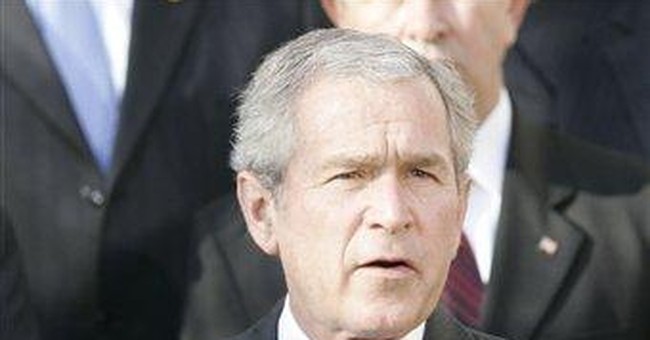 Trending
This three-minute video is a weekly Townhall.com production featuring columnist and blogger Mary Katharine Ham. We hope you enjoy!

I was reading the President's Wall Street Journal op-ed the other day, and came across a word I hadn't heard in a while:

Because revenues have grown and we've done a better job of holding the line on domestic spending, we met our goal of cutting the deficit in half three years ahead of schedule.

Deficit. Remember that one? It was all the rage, well, pretty much up until November of 2006. It is no longer the hotness, as political buzz words go, because Democrats are now in power, and that means they get to do all the right deficit spending. It's the new black!

But back in 2004, the federal deficit was sure to end us all, according to Democratic candidates, and it was all caused by those utterly irresponsible Bush "tax cuts for the rich."

In a 2004 debate with Bush, Kerry mentioned the deficit six times, calling it the "biggest in American history" (It wasn't.). He spoke of the President's turning a surplus into a deficit – "the biggest fiscal turnaround in the history of the country."

He, of course, didn't mention that said "turnaround" happened on the heels of an inherited recession, the dot com bubble-burst, and the small matter of the largest domestic terrorist attack in our history.

At the time, Democrats called Bush's plan "laughable." CNN reported on it without a hint of condescension:

Like a cowboy-boot wearing David Blaine, President Bush has promised to perform an amazing feat of prestidigitation: he's going to saw the whopping federal budget deficit in half in just five short years.

Bush met his goal by October of 2006, three years earlier than projected Don't remember that milestone? Don't worry. It didn't get much coverage, as only grim milestones warrant front-paging. Once the deficit had shrunk considerably thanks to phenomenal economic growth and increased tax revenues in the wake of Bush's tax cuts, the media didn't think the deficit was quite the story it once had been

Bush's big deficit and pledge to cut it were front page news in 2004. His success in following through on the pledge was front-page business section, maybe.

These days, Democrats are talking about the deficit in a whole new way.

John Edwards said in a 2004 debate with Dick Cheney:

John Kerry and I believe we have a moral responsibility not to leave trillions of debt to our children and our grandchildren.

During the announcement of his run for President last week, the deficit didn't seem like such a big deal, not when compared to the Patented John Edwardian, New and Improved Poverty Cure-All for Bringing Two Americas Together—new social programs!

What kind of money might he mean? Why, your money, of course!

So we're going to have to invest if we're going to transform America the way it needs to be transformed to make us successful in the 21st century, which is going to require rolling back some of these tax cuts, in my judgment, that have been put into place.

In 2005, Nancy Pelosi called the budget a "tragically…missed opportunity to return to fiscal discipline."

The long-awaited return to fiscal discipline, heralded this week by Pelosi as part of the "new America" over which Democrats will preside, will require a pay-as-you-go system. I wonder what they'll pay with.

"I know people don't like to pay taxes, but the fact of the matter is is that this administration has produced a record deficit that is really threatening in long measure our ability to make the kind of investments we need to keep America safe."

Hey, babe, the fraud in your state is one reason we don't relish the tax paying.

And, the Democrats have their leading economic intellectual light covering for them.

According to Krugman, while the budget surplus of 1998 to 2001 was "a bad thing, because it greased the rails for Mr. Bush's irresponsibility," Democrats today can "let the deficit be." He writes,

"By spending money well, Democrats can both improve Americans' lives and, more broadly, offer a demonstration of the benefits of good government. Deficit reduction, on the other hand, might just end up playing into the hands of the next irresponsible president."

Of course, Republicans are far, far, far from blameless in the deficit debacle (I'd add more "fars," but I have a word limit). Given the economic growth and uptick in revenues Bush has presided over, we'd all be even better off by now if the Republican Congress had ever learned to keep its perk-granting, pork-proliferating pen in its pants, and Bush had learned to take the veto pen out of his.

If they had done so, we would not be faced with today's Democratic Congress, which is so all-fired anxious to take one of the real domestic victories of the last six years away from all of us to pay for "investments" in the "transformation" of America into a more advanced welfare state.

And, while that's going on, the deficit will remain. The gargantuan unfunded liabilities of Social Security and Medicare--which make the deficit numbers pretty much useless because they aren't even included--will continue to balloon. And, the Democrats will try and fail once again to create wealth by confiscating it.

Spending was always the problem, and now we'll get more of it, in all likelihood, without the prosperity-producing tax cuts.

But we can't put all the blame on the Democrats. They're just acting like Democrats. If Republicans had acted like Republicans when they had the chance, they could have spared us this. No time like the present, guys.