Suggestions to McCain to Keep the Straight-Talk Express on Track 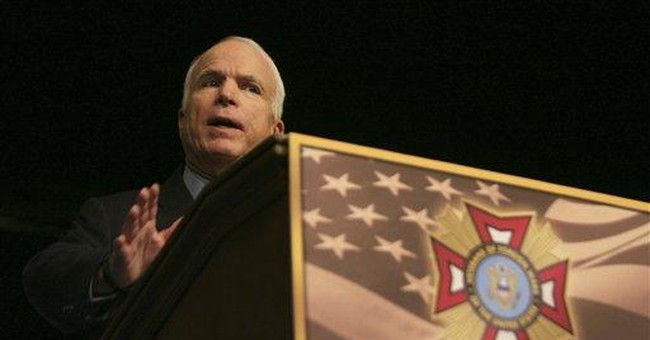 This piece is co-authored by Mary Grabar and Brian Birdnow.

Is John McCain’s campaign sputtering along the same track that Gerald Ford’s and Bob Dole’s did? History--after November 4, 2008--will tell.

But before the train rolls off, history can provide some helpful advice to the McCain campaign to keep it on track. McCain might be able to learn lessons from the doomed, lackluster campaigns of Ford and Dole. Like Ford, the presumptive Republican standard bearer strikes friend and foe alike as an earnest and patriotic American. But McCain’s campaign suffers from a lack of focus, an unclear message, and an inability or unwillingness to convey strong conviction.

Alas, these are the same traits that plagued two of our most forgettable Presidential candidates. President Ford, running in 1976 against the Democratic candidate, former Georgia governor Jimmy Carter, displayed many of the weaknesses now afflicting the McCain campaign. Ford, like McCain, impressed most observers as honest, hardworking, and patriotic. The former Michigan University football star and Naval officer fairly radiated integrity. His solid, midwestern values seemed ill suited, however, to the media age as he failed to use the television camera to any advantage. Ford’s turgid campaigning and speaking style inspired no one, not even his own staff. Moreover, he offered no consistent set of values. At various times Ford emphasized fiscal conservatism, but he showed little imagination in legislative matters and tended to avoid social issues and the political problems attendant to them. Indeed, President Ford seemed unaware of the seismic shifts in the intellectual world of the 1970s and the effect that these shifts would work on national politics. The American public had tired of politics-as-usual and sought to roll back the excesses of the welfare state. Ford did not grasp the central principle that political differences actually developed from ideological divisions, most of which could not be reconciled. One of these, as our interminable debates since 1973 have illustrated, is abortion. Abortion is one of those issues that go back to premises and moral convictions. It was the type of issue that President Ford avoided and hoped would resolve itself.

Ford was reputed to have been the nicest guy in Washington, like the guy next door who kept his lawn neat and paid his taxes, someone who might make a good manager. But he was hardly anyone to inspire voters.

McCain, like Ford, projects an air of honesty, common sense, and good intentions. Yet, he fails to generate much enthusiasm for his campaign. He echoes Ford, also, in that he trusts his opponents’ good intentions a bit too much, and seems to have no grasp of the great ideological questions of his time.

McCain shares similarities also with 1996 Republican Presidential candidate, Kansas Senator Robert Dole. Dole won the nomination after twenty years of active, undisguised political jockeying. He served as President Ford’s running mate in 1976, threw his hat in the ring briefly in 1980, and suffered a painful loss to George H. W. Bush in the1988 primary battle. Dole saw the 1996 nomination as the pinnacle of his career and as the reward for a lifetime of meritorious GOP service. Unfortunately, Dole couldn’t convince the public that his undeniable achievements in the Senate entitled him to the Presidency. He, like McCain, failed to create any real momentum. Late in his campaign, Dole expressed frustration at the necessity of having to convince the public that they should vote for him.

Like Bob Dole, McCain served his constituents well in the U.S. Senate, harbored undisguised Presidential ambitions, but lost a bitterly contested nomination battle to a Bush family member in 2000. He has spent a full generation in public life preparing for a Presidential run. But now that he has earned the nomination he can’t seem to communicate to the public why he is the best candidate and why he deserves their votes. McCain sees the nomination as the crowning achievement of a glorious career, but seems mystified as to why the people think they need a better reason to vote for him.

President Ford and Senator Bob Dole adopted conciliatory and neutral stances and both lost their Presidential elections. In 1976 Ford, possibly the weakest incumbent in American history, fell to Jimmy Carter in a surprisingly close race. Carter won 51% of the popular tally and 297 electoral votes. Democratic analysts sensed trouble ahead since Carter dominated only in the South, but he did just enough elsewhere to win. In 1996 President Bill Clinton handily dispatched Dole, claiming 49% of the popular vote to 41% for the Republican champion, with 8% going to the Reform Party candidate, Ross Perot, who garnered a surprising large percentage as a third-party candidate (although this was down substantially from his 1992 total) precisely because of convictions and passion. Voters identified with his outrage over taxes, and his chutzpah in forging ahead and putting his money where his (outspoken) mouth was. Ross Perot, an unknown in the early 1990s, became a household name by shooting from the hip and not mincing his words. Minor candidates split the remaining two percent of the votes. Clinton, whose ethical problems and character shortcomings were already common knowledge, rolled up 379 electoral votes in a clear and convincing victory.

Will John McCain repeat the mistakes made by President Ford and Senator Dole and join the ranks of failed Republican Party candidates? What does seem crystal clear is that a candidate with no vision, no firm ideological convictions, and a penchant for alienating his natural base of support faces a very difficult challenge on the first Tuesday in November. With his seemingly conciliatory position on abortion, as displayed by his recently entertaining the idea of a pro-choice Vice Presidential candidate, he does little to distinguish himself from his opponent, a man who voted against life support for infants born after botched abortions. Conservatives have no reason to vote given such choices.

John McCain needs to repeat what he did in the interview with Rick Warren at the Saddleback Church on Saturday. His voting record on abortion, for example, demonstrates his convictions on life with action. Now he needs to send a strong message to voters. He needs to cling to those convictions with the same tenacity he clung to his patriotism and life itself while a prisoner of war in Vietnam.

Then he needs to say it to the American people—loud and clear, and with conviction.

Brian E. Birdnow has a Doctorate in American Political History and teaches at a university in the St. Louis area. He is currently writing a biography of Gerald R. Ford. Dr. Birdnow can be contacted at bebirdnow@aol.com.