The making of a mass murderer-- In english class 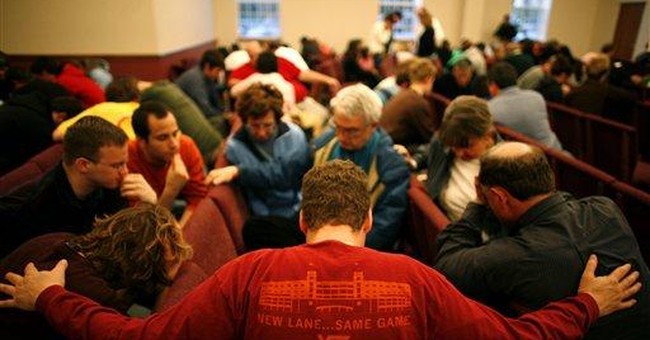 If you were a student at Virginia Tech last fall and had a propensity for the gruesome and violent you could have satisfied your thirst for the bloody and course requirements by enrolling in Professor Brent Stevens’s English 3984 class, “Special Studies: Contemporary Horror.” And, as a plus, you wouldn’t have to read many books because some of the “texts”--as they increasingly are in English classes today--would be movies.

Guess who took that class that watched The Texas Chainsaw Massacre and explored in papers and a “fear journal” how “horror has become a masochistic pleasure,” according to the course description? Guess who read a graphic novel (a book with pictures, i.e., a comic book) titled From Hell by Alan Moore, presented by Professor Stevens as “one of the most popular and accomplished writers in the medium,” as well as the work of scholarly “criticism,” Men, Women and Chainsaws? Guess who was drawn to the course described by the professor with these words: “We are consuming horror on an unprecedented scale. But the rules have changed. Until recent years, lead characters could be counted on to survive the invasion of zombies/homicidal maniacs/vampires. But this margin of safety no longer exists; horror has become a masochistic pleasure”? Guess who said to himself, “Bingo! That’s the course I want!” to a course description that ended with the words, ‘WARNING: Not for the faint of heart.”

Cho Seung-Hui proved, indeed, that he was not “faint of heart.” His own massacre of 32 fellow students and professors on April 16 demonstrated that if he did have a heart it was filled with evil. Cho outdid Freddy Krueger.

The showing of the videos and writings left by Cho has stirred up much debate by commentators. But what about the videos and books that were considered “texts” in an English class in an institution of supposedly “higher learning”? Would NBC and other stations be criticized for airing footage from one of the required class texts, The Texas Chainsaw Massacre, on prime time? But this is what Cho and his classmates were writing term papers on.

And while the public gasped at Cho’s demented one-act plays (including one that involved a chainsaw murder), few noted that these were rather crude renderings of the subject matter of much young adult fiction discussed in high school classes: family dysfunction, the evil of teachers, and adults as perverts.

In our schizophrenic universities students are taught that Christianity is evil and that heroism is a passé idea of old fools; at the same they are trained in pacifism and sensitivity. College classes extend from high school the training in respect and appreciation for the practices of every other culture, while disparaging our own. Students, steeped in relativism, scoff at the notion of original sin, insisting that it is our culture, especially its religion, that corrupts the heart and mind of the inherently innocent child.

When most college freshmen are presented with Alexis de Tocqueville’s notion that government should encourage religious belief and that atheists should be “marked as the natural foes of the whole people,” they gaze with horror. How dare he state that an atheist’s ideas are less valid than a Christian’s! How judgmental and intolerant! Why atheists, they insist (sometimes pointing to themselves), can be “good people.” These students are only eighteen years old, but they are firmly set in their beliefs in gay marriage, unrestricted abortion, the prohibition of prayer in the public arena—and in cynicism about previously cherished values like heroism, nobility, and honor. But they have had 13 years of indoctrination.

To aid and abet this moral leveling we have a curriculum made up of titillating ephemera. Among the panoply of trivia are grievance tracts by “overlooked” writers, cave paintings, scalp dances, performance art, pornography—and horror flicks--that professors think will draw student-customers. It’s not that the great writers did not depict evil and horror; just read Shakespeare, Dostoyevsky, and Flannery O’Connor. Pious literature is no more great literature than slash-and-burn movies are great cinema. But great literature, while providing the cathartic experience of tragedy, engages us in moral questions. As Toqueville points out, “the greater part of the most famous minds in literature adhere to the doctrines of a spiritual philosophy.” But chances are that the student taking the upper level Shakespeare class will have Judeo-Christian ideas “deconstructed” by the professor and by the scholarly criticism as evidence of an oppressive culture. Cho’s screed against Christianity is only slightly less logical than those that have been penned and published by Ph.D.’s since the 1960s.

At one time, institutions of “higher learning” cultivated an appreciation for the sublime through a study of literature. Literature dealt with the lofty and heroic—even among God’s fallen creatures. Of course, the notion of the sublime is meaningless to the soulless professor and administrator mired in the material realm like the cattle that Plato presents in The Republic: “always looking down with their heads bent to earth and table, they feed, fattening themselves, and copulating; and, for the sake of getting more of these things, they kick and butt with horns and hoofs of iron, killing each other because they are insatiable. . . .” They are insatiable in terms of the senses. Consequently, over the decades the subjects of study have had to become more and more extreme in order to be declared ‘relevant’ and to appeal to desensitized students.

It’s quite interesting that Cho’s professor, Brent Stevens, chose to use the academically fashionable term, “encounter,” to describe the class assignments; they included, among papers and tests, the “fear journal in which students will write narratives about their personal fears and catalogue their interactions with the texts we encounter.” What more sensational “text” to “encounter” than that of a senseless, bloody “massacre”—whether by chainsaw or gun? What more appropriate education for the next egotistical, narcissistic, soulless, anti-Christian, anti-authority, anti-hero? Among those to be feared, indeed, are those like Professor Stevens, who assume to elevate Cho’s real-time actions of horror to a genre worthy of study.