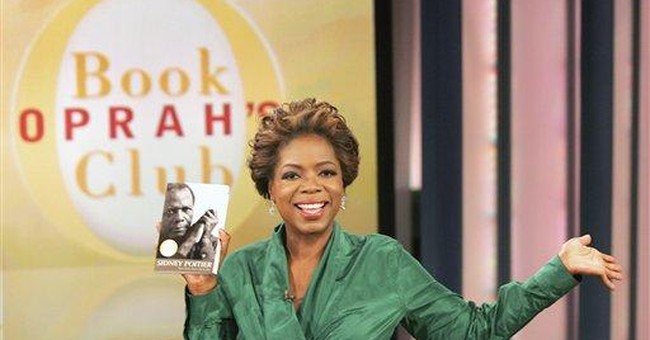 Much has made of the fact that the next president could be either a woman or a black man. Much is also made of the “Oprah factor”—what will Oprah do? Who will she endorse? Pundits wait.

We-e-ell, Oprah is both black and female. Why not simply elect her for President?

Unlike Barack Obama, Oprah can make the claim of being the descendent of slaves. Plus, she has charm, charisma, and a devoted following, without the albatross of a ladies man ex-president for a husband.

What Hillary Clinton is proposing—having “conversations”—Oprah has been doing for years—and making billions at it.

If you want a problem-solver, just watch her at work on her program. There, all problems, with the shedding of a few tears and a look ‘deep inside,’ disappear. Everyone wants to be on her program and hugged by her. Think about it: Don’t you feel better after you’ve had a good cry? Oprah makes us believe, You can change yourself! Both on the inside and on the outside! A makeover and a wardrobe change does a world of good for the self-image and provides a jump-start on changing negative thought patterns. By thinking positive thoughts and getting rid of emotional blocks that hold us back, we can transform as a nation and change our abysmal approval rating in the world.

Oprah would lead by example. Look at her own transformation—from a discriminated against eating-disordered victim of abuse to billionaire.

Oprah is real. We can identify with her. She isn’t too thin, so we don’t have to be jealous. If Oprah can do it, you can do it!

If ever there was a great Communicator it is Oprah! She can talk to anybody. There would be no more flubbed lines at press conferences. Instead of the insulting desk calendars containing mangled lines for each of the 365 days of the year, we would have nice calendars with pictures of a beaming sisterly president—much like those on the cover of her magazine. Our President would be communicating to us Monday through Friday on her program, as well as in a monthly magazine. No need for reporters to dig up facts or get them from a press secretary.

In fact, no more need of editorials and commentary analyzing presidential speeches and policy. There would be no need because Oprah is so open with herself. She is not afraid to display emotion. She doesn’t wear stuffy suits. She talks frankly about her past: her childhood, her struggles with weight. Can you imagine anyone holding up a sign saying, “Oprah, the Real Terrorist” or “Impeach Oprah”? Unlike the founding fathers, who did bad things like owning slaves, and a current president who liked to party in his youth, Oprah has no skeletons in her closet. Think about it: do you know of anything bad that Oprah ever did? No. In fact, anything bad in Oprah’s life has been what has been done to her.

Oprah, also, would be a president who reads. Through her national book club she has already done so much to advance the primary goal of our educational system: multicultural understanding. Everyone would be reading her selected books—without having to look up hard words. Educational standards would be revised. For example, instead writing papers on irrelevant facts about the founding fathers, schoolchildren would prepare multimedia presentations on Sidney Poitier and other prominent figures in our history. No child would be left behind, truly. We know that all children learn differently, and we would respect the abilities of those who have aural and visual learning styles and convey ideas through dramatic gestures and a limited street vocabulary to express their reality in the “hood.”

In fact, why even bother to study the documents written by a bunch of white propertied men (some of whom owned slaves) who died two hundred years ago? Don’t a lot of people have arguments over such silly things as the Constitution? Just look at how much conflict we have over the First Amendment. Argument and legal wrangling are just so—adversarial! And so patriarchal and old school. Wouldn’t it be better to just talk about it? Couldn’t we iron out our differences on Oprah’s couch? It could lead to the elimination of the need for guns even.

What about those remaining citizen-viewers who might be resistant to this form of conflict resolution? No problem. Oprah has an army of therapists ready to be deployed on a moment’s notice.

Do you see the potential here? No more wars even. We would not need wars because everyone would be accepted: the Christian, the Muslim, the Jew, the Hare Krishna, the Wiccan, the Scientologist. All beliefs would be embraced. We would open our borders to the world (poor underprivileged peasants). We would all be talking to each other. The idea that the Judeo-Christian heritage forms our values would be eliminated. All beliefs would be welcome and given equal voice. In addition to gay marriages, we would have all kinds of marriages: polygamous, inter-generational, inter-species-ist. (Think about how many lonely women have long-term relationships with their cats and need health benefits for them). And if some cultures want to walk around hooded and masked (or only their women) who’s to say they shouldn’t?

Goodness, I’m getting away with myself. But can’t you see the potential? No more conflict. No more reading hard, logical stuff. No more rules and laws devised by dead white men. Instead, we would use “women’s ways of knowing”; we would explore all of our feelings.

What? You don’t see it? How can you not? Are you harboring prejudices? Do you still have some residual anger inside?

Oprah will help you deal with it.

In fact, she will send you off on a retreat to the distant desert, a place where previous patriarchal administrations foolishly tested weapons. But President Oprah, with her Presidential Order against War (approved unanimously by the Congress under the leadership of Nancy Pelosi), will have dismantled it.

All you will need to worry about is packing your bags for a month at the Dr. Phil Treatment Center. Remember to bring your swimsuit. Be prepared for a make-over! There, you will find government psychiatrists, recovery groups, and the 24-hour stream of the Oprah Show in the rec room.

And you won’t even have to worry about the bill because it will be covered by universal health care.